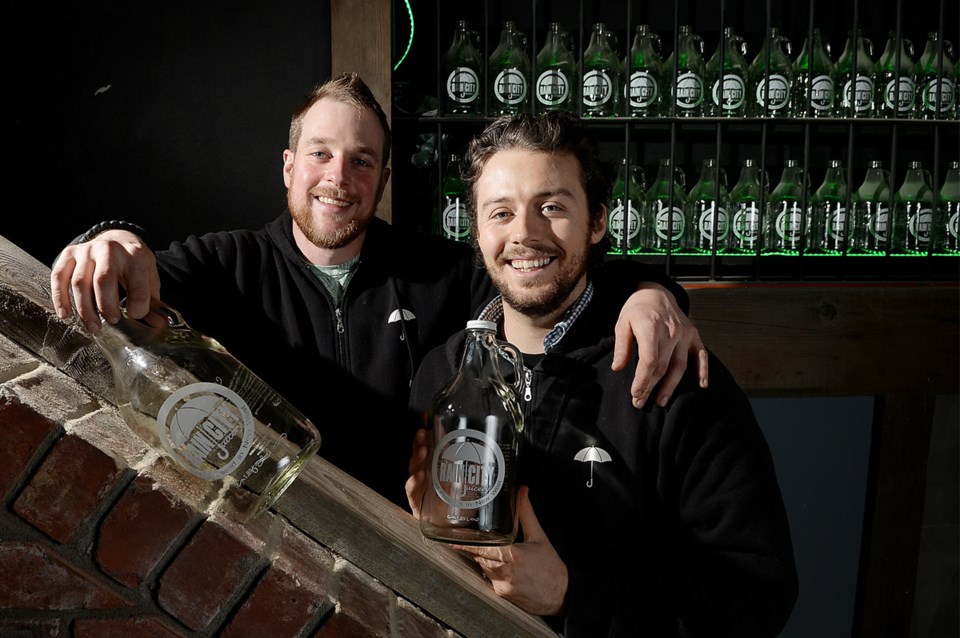 From left: Clayton Oates and Tylan Fraser show off the glass growlers that will be available for purchase once Rain City Juicery opens in a few months.Jennifer Gauthier

When not at their day jobs, three local entrepreneurs are at 417 Front St. with hammers and nails.

Tylan Fraser, Gabriel Savage and Clayton Oates have been building Rain City Juicery from the ground up since last September - from installing a red brick fireplace to building a curved dispensing counter.

The trio, all BCIT grads, wanted to get into the business of selling cold-pressed juice after realizing a company like theirs didn't exist in New Westminster.

"When I lived in the Quay, I'd ride the SkyTrain to work and always be craving a smoothie," Fraser told the Record. "The only place that was selling them was Starbucks or Tim Horton's, but they would be way too sweet. You'd have it, and wouldn't be like, 'This is a good morning meal; I feel satisfied.'"

Unlike traditional techniques that involve the sharp blades of a blender, the cold-pressed method uses a commercial hydraulic press to squeeze the produce. Enzymes then get into the bloodstream faster, according to Fraser, because the machine doesn't heat up the juice.

"The nutrients are the freshest and are served to you right away. You're dealing with a high quality item because of the amount of produce you have in each serving," he added.

While still under construction, Fraser envisions the 900-sq. ft. space to feel like a lounge where people can sit and relax. A couple of comfy chairs by the window and four stools by the bar should do the trick, he said, adding there's also going to be an outdoor patio.

Much like bartenders, the boys will have a well of juices to choose from for customized drinks. Each recipe should take about three minutes to complete.

"That's the neat thing about it, is that if someone doesn't want a particular ingredient, or they have an allergy, perhaps a little less serrano pepper, then we can do that," Fraser said.

Rain City Juicery will roll out with six concoctions when it opens later this spring or early summer. In keeping with their roots, the list includes "New West Sunset" - a blend of beet juice, orange juice and grapefruit. Juice lovers will also have the option of buying two-litre growlers.

"There's nothing better than 100 per cent squeezed OJ," he added.

The menu doesn't stop there. Soups and salads will be made fresh in house for patrons wanting a snack with their beverage.

During the cooler months, Fraser told the Record they'll be looking to sell their product to other businesses.

"Having worked at a restaurant, I used to have to hand squeeze limes. Now, maybe they can bypass that labour and get that juice from us right away," he said.

With the pedestrian walkway at Fourth Street to Pier Park now open, the group anticipates a busy first day.

"It's been wild so far, but it's been fun and we can't wait to bring this concept to New West."

For more information about Rain City Juicery, located a few doors down from the back entrance to the Army and Navy, visit www.raincityjuicery.com.