A new spin on fast food 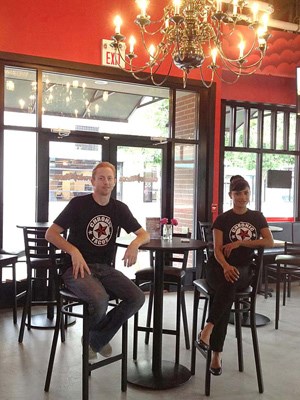 Refreshed: From left, Will and Shimi Davis, owners of Chronic Tacos' New Westminster location, recently renovated the 10th Street restaurant, adding a variety of unique items, including hand-crafted table and chairs and a vintage chandelier (pictured) that they bought at an auction in Vancouver. Cayley Dobie/THE RECORD

New Westminster goes by a lot of names, but forget about calling it the new "Brooklyn," says Chronic Taco owner Shimi Davis - the city is more like the new "Kits."

"We didn't like what we saw. It was really neat - it was a neat little store, but it was not up to what we'd pictured it to be," Shimi said.

And so the couple - who live in Vancouver - began the process of renovating the 10th Street restaurant.

The location, which originally followed the Chronic franchise design - red floors and walls and some embellishments on the walls - but nothing much more, Shimi said.

"I always joke about it, I say it was like orphaned almost or an unloved space," she laughed.

From about May to July, Davis and her husband redesigned the restaurant to suit the vision they had for a funky tacos shop in the heart of the Royal City.

"It was a slow process. It was kind of like working with the space, deciding how we wanted to design it and build it and relaunch it," she said.

Eventually they came up with a design and a plan that matched the ambience they wanted for the restaurant, which was a space that was sleek, hip and inviting to the New West community.

"We changed everything," she said. And she's not kidding. Shimi's husband - who works in construction - created new menu boards mounted on black boards; they added extra seating, custom-made tables and added black trim around the windows. They installed new tiles around the restaurant and a vintage chandelier they bought at an auction downtown. They also stripped the floors, revealing the dark grey concrete below.

"Just changing it to a nice organic look made a huge difference," she said. "It's just a lighter space as opposed to a red and black heavy space."

And the franchise owners in California had no problem with her new vision for the cool hang out, she said.

"They kind of want edgy, funky spaces, and they let franchises decide on what they want," Shimi added.

Davis and her husband were first introduced to Chronic Tacos while visiting Will's sister in Huntington Beach, California.

"You'd walk in (to the restaurant), order your food, grab a beer, play pool, and ... we found that we were waking up every morning, getting our food, going down to the beach, coming back up and playing pool and eating amazing, really, really good food," she explained.

The California beach-bum vibe is part of the inspiration for the New West location. The restaurant also has a bar space - added as part of Davis' renovations - where they serve drinks seven days a week.

They also have highballs, margaritas and cocktails - including a fire and ice mojito that's made from spicy peppers.

New Westminster's Chronic Tacos is located at 110-66 10th Street (between Agnes and McInnes streets on the West side of the street). For menu items and hours visit http://eatchronic tacos.com/index.php/locations/location_land ing/2399.

Cayley Dobie, The Record / Refreshed: From left, Will and Shimi Davis, owners of Chronic Tacos' New Westminster location, recently renovated the 10th Street restaurant, adding a variety of unique items, including hand-crafted table and chairs and a vintage chandelier (pictured) that they bought at an auction in Vancouver.;