OpenStage is back, and this guy's still obsessed with New West

Howard Dai is obsessed with New West. Whenever he’s out driving with friends from elsewhere, he can’t help himself from sharing details about this street or that building or this neighbourhood.
Jul 31, 2019 9:35 AM By: Julie Maclellan 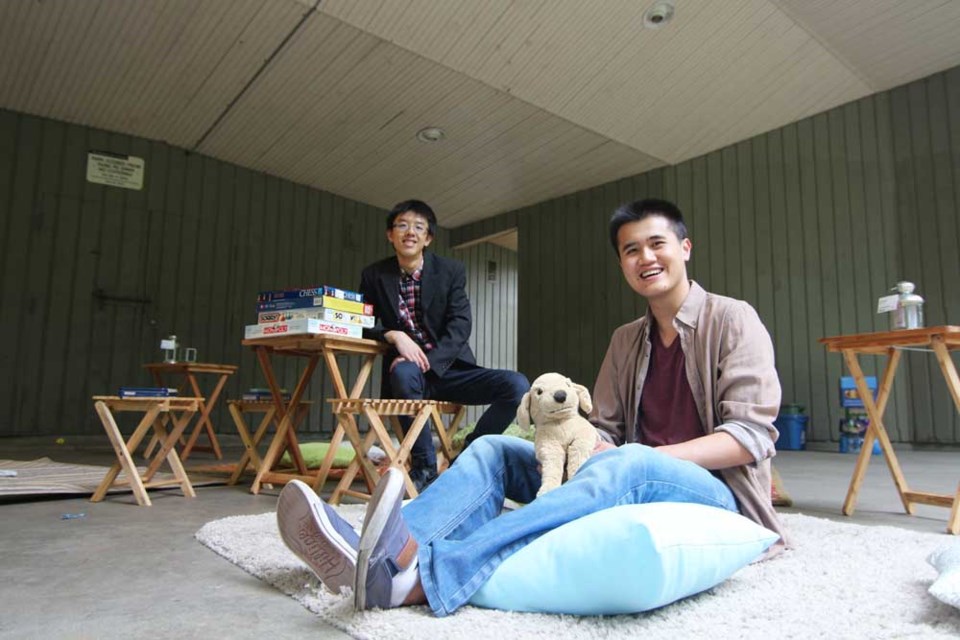 Howard Dai, left, and Tiger Xu during the inaugural season of Open Stage New West in 2016. The outdoor performance series is back with a reconfigured format for this summer - Aug. 10, 17 and 24.Record files

Whenever he’s out driving with friends from elsewhere, he can’t help himself from sharing details about this street or that building or this neighbourhood.

“All of my friends know how much I am obsessed with New West,” Dai says with a laugh. “I have stories about every intersection, every corner in New Westminster.”

His passion for his city was a driving force behind the creation of Two Gents of New West, an organization he founded in 2013 with his friend Tiger Xu. Xu is now off to Baltimore to pursue a PhD in neuroscience at Johns Hopkins University, but Dai remains in the city, where he’s living and working this summer for the Burnaby Arts Council’s summer theatre program.

Dai is continuing the mission the two had in mind when they formed Two Gents while at New Westminster Secondary School: to foster emerging talent in the arts through a variety of multidisciplinary projects. Among those projects is OpenStage New West – an intimate outdoor performance series that returns to the bandshell at Queen’s Park for three Saturdays, Aug. 10, 17 and 24.

This year’s sessions will run from noon to 4 p.m. each day, with three programmed acts each day plus an hour of open mic or open jam time. The lineup of performers is set to include an improv troupe, musicians, a dancer-choreographer and a drag performer, all offering up family-friendly shows.

At the same time, there will also be some interactive arts activities around the bandshell for kids and families to get their hands on art while taking in the performances. One of those will be an ArtsToGo workshop hosted by the Arts Council of New Westminster, which will be led by a professional artist.

“Anyone can come by and walk away with something to take home,” Dai said.

In earlier incarnations, OpenStage has been held entirely on the stage, with couches set up living-room-style on the stage so audiences join the performers in the space. This year, Dai is arranging it so only the performers will be on stage but the audience will be close by, with stools and tables – including snacks and juice boxes – set up in the grassy area between the benches and the stage.

People can come and go as they please throughout the show, or stay and watch all the performers.

Dai also switched to afternoon events this year, rather than evening, in the hopes that with the proximity to the splash park, playground and petting farm, families spending time in the park will wander over to check out what’s happening.

Bring performers and audiences together is the realization of a two-fold mission for Dai: to support and foster emerging talent, and to help activate even more community spaces in New Westminster.

Each week will feature at least one performer from New West – drawn from Dai’s connections to the Arts Council of New Westminster, Massey Theatre and New Westminster Secondary School – and one from Simon Fraser University, where Dai is currently finishing up his theatre studies.

With support from the Arts Council of New Westminster and Momentum Youth Arts, Dai is able to pay the performers and give them a chance to share their work with local audiences.

Past years have shown Dai that both the performers and the audiences have appreciated the OpenStage concept.

For the artists, he said, the intimacy of the setting has been a bonus.

“They’ve really appreciated it because it’s such a small, individual setting,” he said, adding that although crowds have been small, audiences have often stayed for the entire session. “Not a lot of people were there, but everyone who was there was very engaged.”

That level of engagement comes as no surprise to Dai.

When he’s worked on events in Vancouver, he said, he’s always struggled to get attention for his projects because there are so many far-flung neighbourhoods and so many events competing for attention.

In New Westminster, though, the walkability of the city combined with its heavy focus on the arts means he finds people looking forward to OpenStage each summer.

“The audience in New Westminster is very generous, very receptive to arts and entertainment,” he said, noting it seems like everyone waits eagerly for the summer season, when performances spring up all over the city – thanks in large part to the efforts of the Arts Council of New Westminster.

“I’m really happy there’s so much music and arts in the city, but I think they’re still hungry for it. It’s nice to see that there’s always interest.

“People are looking for it. That’s a major reason for us to keep doing these things.”

Check out Two Gents of New West on Facebook (www.facebook.com/twogentsnw) for all the details, or search for Open Stage 2019 on Facebook for event information.

1285
New Westminster neighbourhood aims to make Lunar New Year magical in 2021
291
Transit police seeking man who allegedly pushed woman to the ground unprovoked at SkyTrain station
237
UPDATE: Here's where you could be able to buy cannabis in New West
169
ICBC launches online tool to calculate savings with new program
157
OPINION: Here's how those millionaires managed to skip the vaccination line