Love art? Want to have some fun at a community event? The Artists in the Boro group is having a Spring Fling for Art this weekend. The reception is being held on Sunday, April 13 from 1 to 5 p.m. at the Queensborough Community Centre.
Apr 10, 2014 9:58 AM By: Julie Maclellan 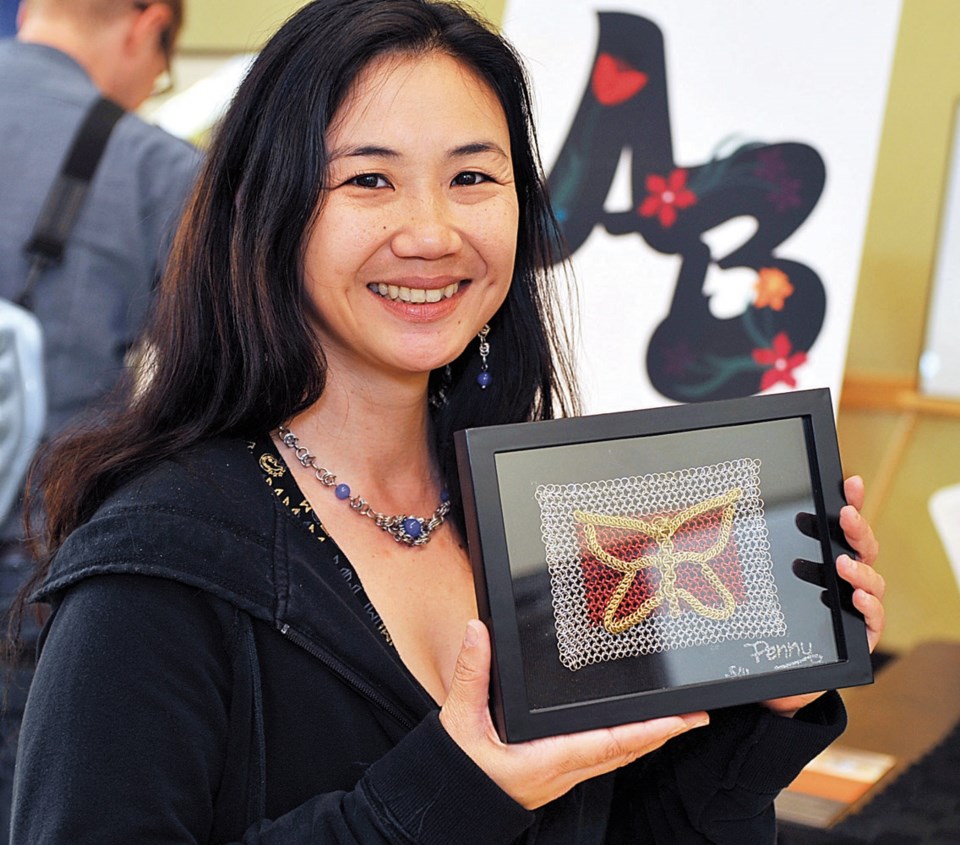 Penny Cheng (seen here in a file photo) with some of her chainmaille work. She's one of the featured artists at the Artists in the Boro Spring Fling this weekend.file photo, The Record

Love art? Want to have some fun at a community event?

The Artists in the Boro group is having a Spring Fling for Art this weekend.

The reception is being held on Sunday, April 13 from 1 to 5 p.m. at the Queensborough Community Centre.

It will feature a display of art of all kinds, along with food, music, a white elephant sale and a raffle basket to be won.

Also on display will be photography by Karen Justice and Kelly Lambert, as well as painting, ceramics and sculpture by Floyd Sanderson.

The Queensborough Community Centre is at 920 Ewen Ave.

Those are the three writers who emerged on top (in poetry, non-fiction and fiction, respectively) in the second annual Royal City Literary Arts Society Write On! contest.

The three first-place winners will be featured at the LitFest New West's gala showcase on Saturday, April 26.

The society announced the full list of winners and honourable mentions on Friday.

Also taking awards in poetry were Max Tell, in second place, and Vanessa Winn in third, with honourable mentions to Spring Hawes, Alan Hill and McKillop.

In non-fiction, second place went to Karen Faryna and third to Donna Terrill, with honourable mentions to Alexander Birkbeck, Jude Neale and Terrill.

In fiction, second place went to McKillop (notably, the only writer to be recognized in all three categories) and third place to Elizabeth Schofield, with honourable mentions to Jen Ryan and two to some Julie MacLellan person. (Yes, I confess, it was me. Hey, sometimes you have to write about yourself, apparently.)

Congratulations to all the winners.

And a big thanks to the Royal City Literary Arts Society and judges Jonina Kirton (poetry), Corey Levine (non-fiction) and Antonia Levi (fiction).

A New Westminster artist is being honoured by the Canadian Railroad Historical Association.

Max Jacquiard is being recognized by the association's Pacific Coast division with its Norris Adams Memorial Award, which is presented annually to honour a person who has made a significant contribution to the preservation of railway heritage in British Columbia.

Jacquiard was nominated for the award based on the many fine paintings and prints of trains he has created over the past three decades.

Barrie Sanford, who nominated Jacquiard for the award, said Jacquiard's paintings have earned him many fans - including Terry Fergusson, a heritage railway preservationist, who said, "Max is to trains what Robert Bateman is to wildlife."

Jacquiard will receive his award at the Canadian Railroad Historical Association's annual general meeting on April 17 on Coquitlam.

A Power Point show of some of his paintings will be offered, and Jacquiard will be on hand to sign copies of Train Master: The Railway Art of Max Jacquiard.

Want to jump into the world of Canadian poetry?

Carol Shillibeer is hosting a poetry study group, The Poetry Wars, at the Heritage Grill.

A press release from the Royal City Literary Arts Society notes that group members explore Canada's literary environment, reading poems, reviews, texts and commentary and then gathering to discuss them at once-a-month meetings.

"The group is free of monetary expectation, but investment can also be in mental anguish and sweat. Expect both of the last two," the release warns.

Do you have an item for Lively City? Send arts and entertainment ideas to Julie, jmaclellan@royalcityrecord.com, or find her on Twitter, @juliemaclellan.

Step into the life and work of Leonardo Da Vinci with new immersive 'sensory exhibit' coming to Metro Vancouver
Apr 15, 2021 9:00 AM