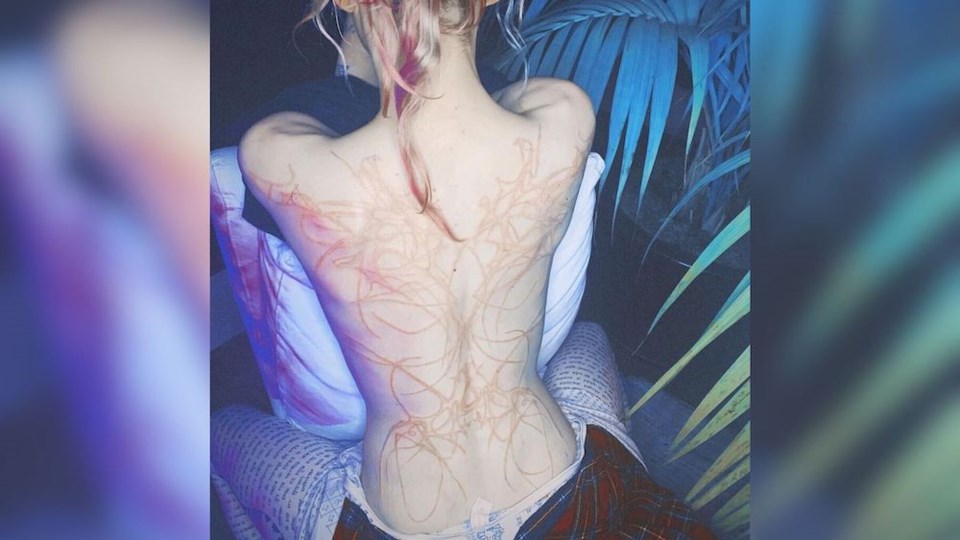 Vancouver-born musician Grimes, the wife of Elon Musk, shared an image of her full-back tattoo of "beautiful alien scars" on Instagram on April 11.Photo via grimes / Instagram

Vancouver-born musician Grimes is known for rocking an eccentric style.

From multi-coloured, cascading hair to elaborate costumes to striking, ethereal makeup, the Canadian songstress commands a variety of eye-catching looks.

But her latest tattoo might have you stealing a second glance.

Grimes took to Instagram earlier this week to share an image of a full-back tattoo in white ink by artist @tweakt with some help from "from the alien computer brain of @nusi_quero."

At first look, the spiralling design might look like a tangled web. However, the musician remarks: "Don’t have a good pic [because] it hurts too much and I need to sleep haha, and it’ll be red for a few [weeks].

"But [it is going to] be beautiful alien scars."

The singer has several tattoos already, and a couple of them are quite large.

A few years ago, Grimes revealed a full-leg, brushstroke tattoo on Instagram, which the artist shared, too.

Last year, Grimes and tech billionaire Elon Musk chose a very unique name for their newborn son. However, they decided to go with something different.

In a series of comments on Instagram, Grimes says that the couple was changing their son's name from X Æ A-12 to X Æ A-Xii. After that, she mentions, "Roman numerals. Looks better [to be honest]."

- With files from Lindsay William-Ross.