Incredible NASA photos of the sun

Every child, at least once in their life, has been admonished to not stare at the sun for so long lest they go blind. But does looking at the sun really cause blindness, or is that just an old wives' tale? Turns out, it's a bit of both. The retina most certainly can be damaged by staring straight at the sun, but it would take several minutes of uninterrupted focus for that to happen.

In order to cause permanent injury to the eye, the retina would need to heat up by 50 degrees Fahrenheit. And at the brightest point of the day, when sun-induced eye damage is most likely, the average person can only look at the sun long enough to experience a 39-degree Fahrenheit increase in corneal temperature. After that, our natural defences take over and our sensitive eyes begin to water and burn, which typically causes us to blink and look away before long-term harm can be done.

Fortunately, there are better and easier ways to get a good look at the sun. We can, for example, peruse NASA's online gallery of sun photos. Over the last 100 years alone, the agency has taken thousands of photographs of the star. In the following slides, Stacker has rounded up 10 incredible photos of the sun from space taken by the agency. These images are a much clearer and safer way of getting a good look at the glowing ball of gas at the centre of our solar system. 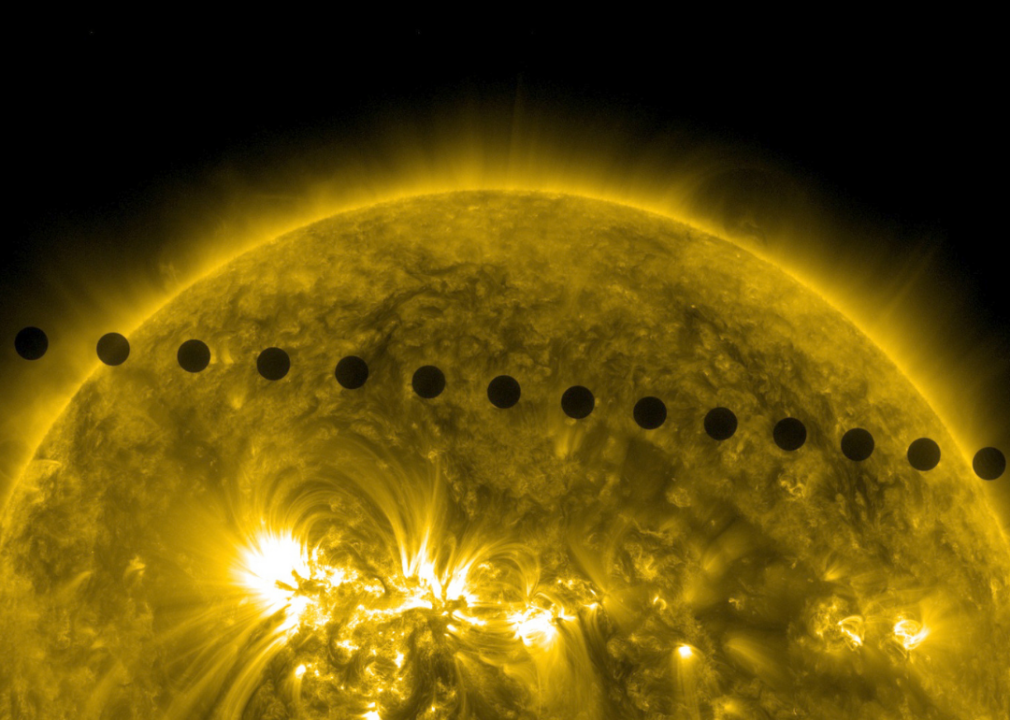 This photo captures the transit of Venus—or the moment in which the planet passes in front of our sun—an event that happens only four times every 243 years. The next Venus transit will happen in 2117, which means no one currently alive is likely to see it ever again. 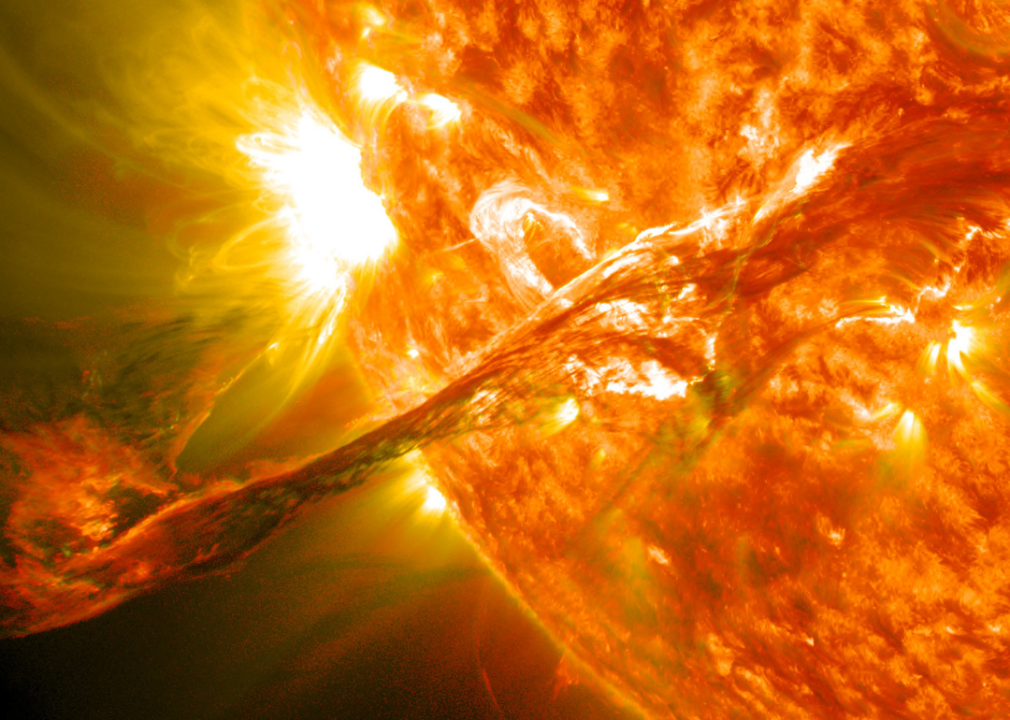 When solar material enters the sun's atmosphere or the corona, it is often expelled out in what is called a coronal mass ejection (or CME). These CMEs, which are most easily understood as bubbles of electrified gas, cause the auroras that we see at the north and south poles 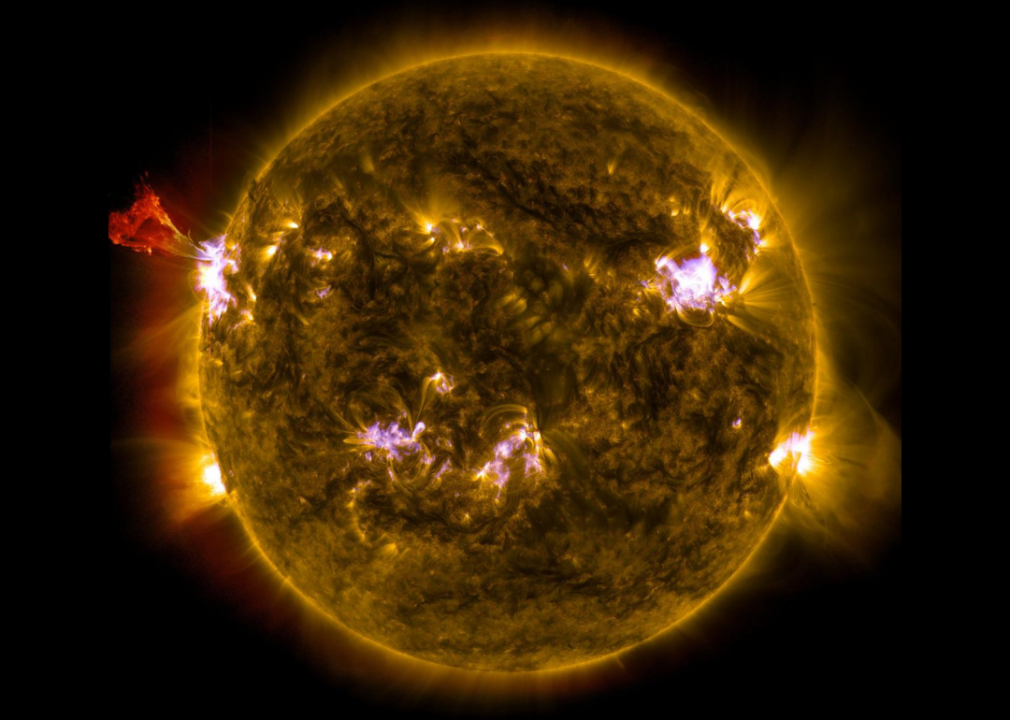 Occasionally, the sun will form solar prominences or looped rings of plasma (hot gas) that extend from the star's surface into its corona. These prominences take a day to form, and can last for several months, but eventually burst—like the one pictured above—when they become unstable, causing a solar flare. 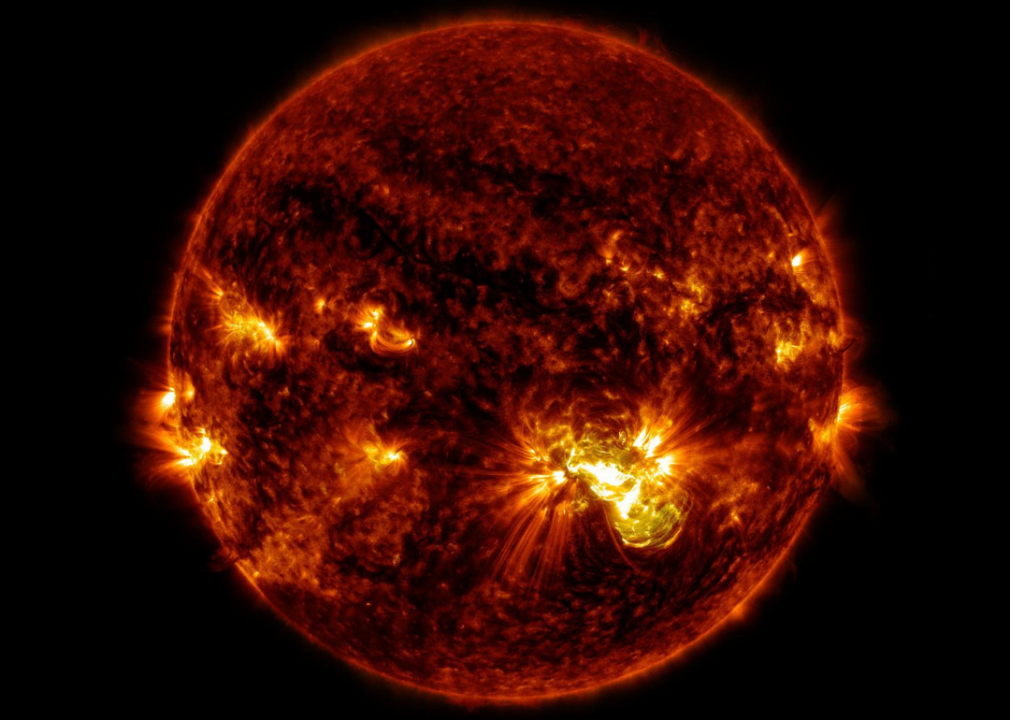 Sunspots, like the ones shown in this image, are areas where the magnetic field is significantly higher than anywhere else on the sun. Because of the way these sunspots affect pressure on the star (their increased magnetic pressure decreases the atmospheric pressure of the corona) they are incredibly volatile and often create dramatic solar flares. 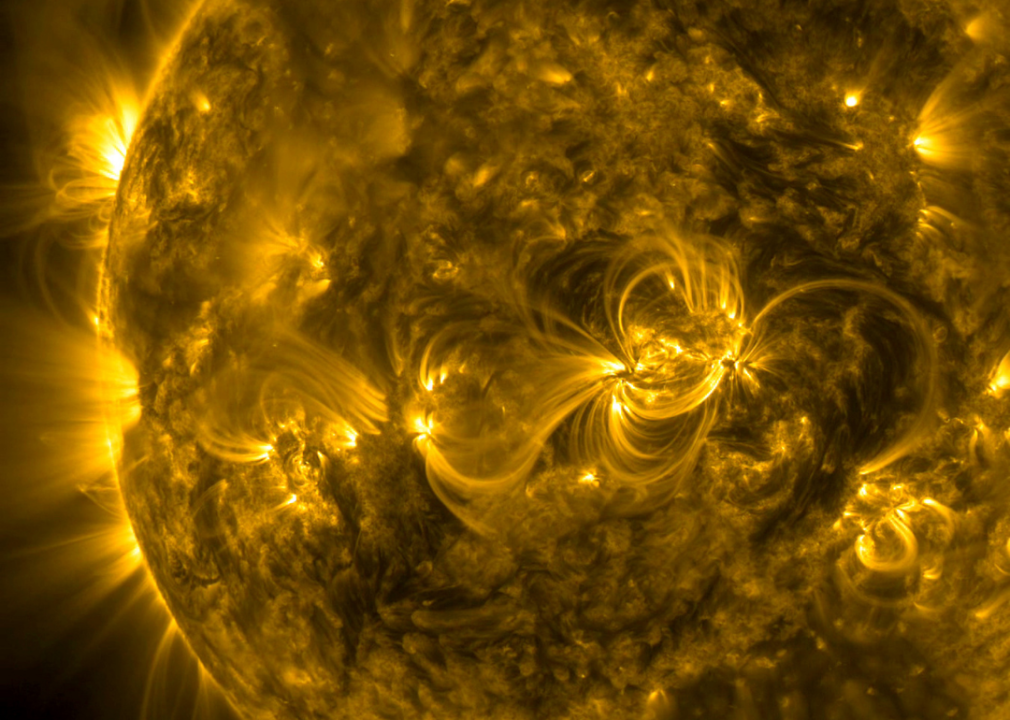 This photo from NASA shows how the magnetic poles created by various active regions on the sun can link up, or connect, to make swirling and looping patterns across the star's surface. 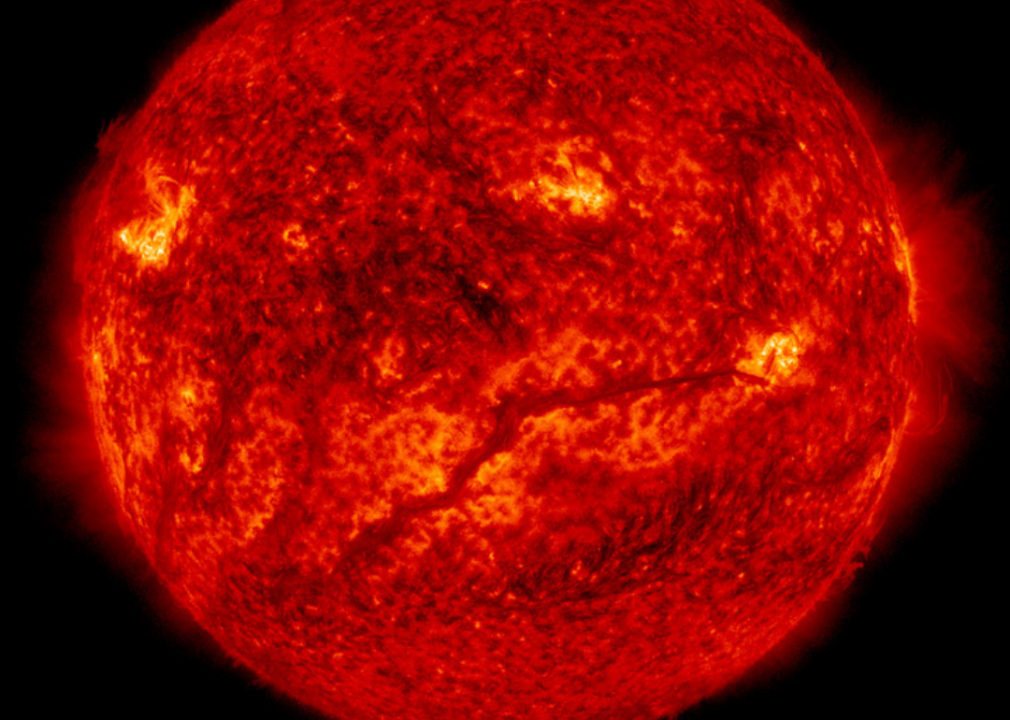 Essentially the same thing as solar prominences—magnetic loops of hot gas that extend out and away from the sun—filaments are viewed from the top rather than the side. If this particular filament were stretched out, it would be 533,000 miles long, which, according to NASA, is longer than 67 Earths laid side-by-side. 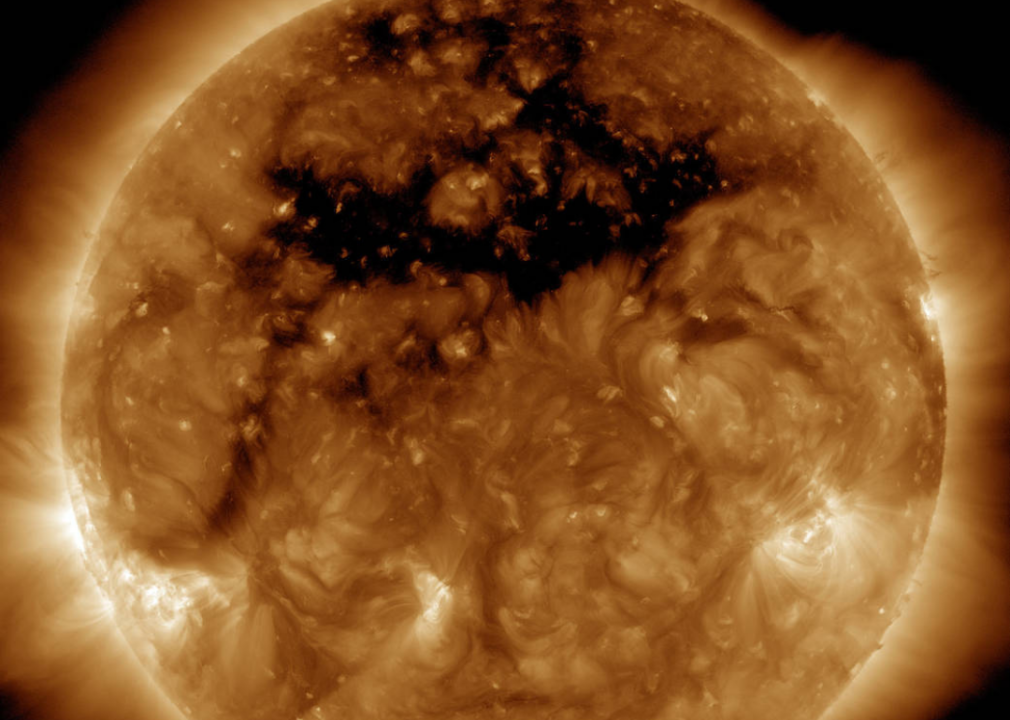 This picture captures a coronal hole or a spot on the sun where the star's magnetic field is open to space. Solar wind, which contains all types of gasses, escapes through these holes, causing geomagnetic storms (aka auroras) near Earth. 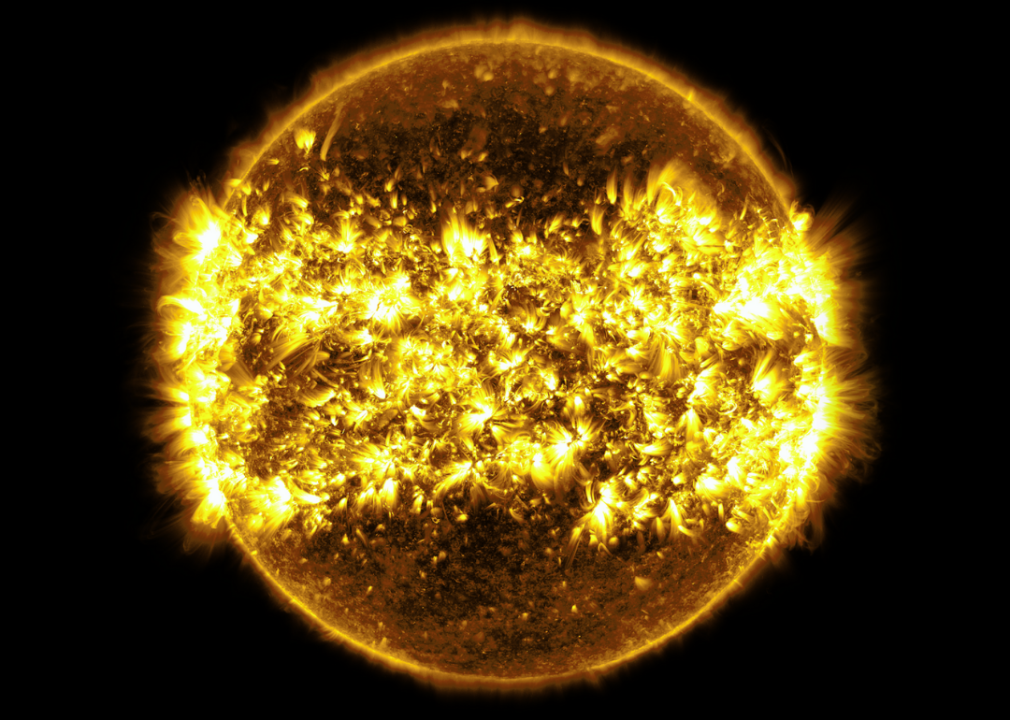 This composite image covers the space of time between Jan. 2, 2015, and Jan. 28, 2016, and shows which regions of the sun were most active during that span. 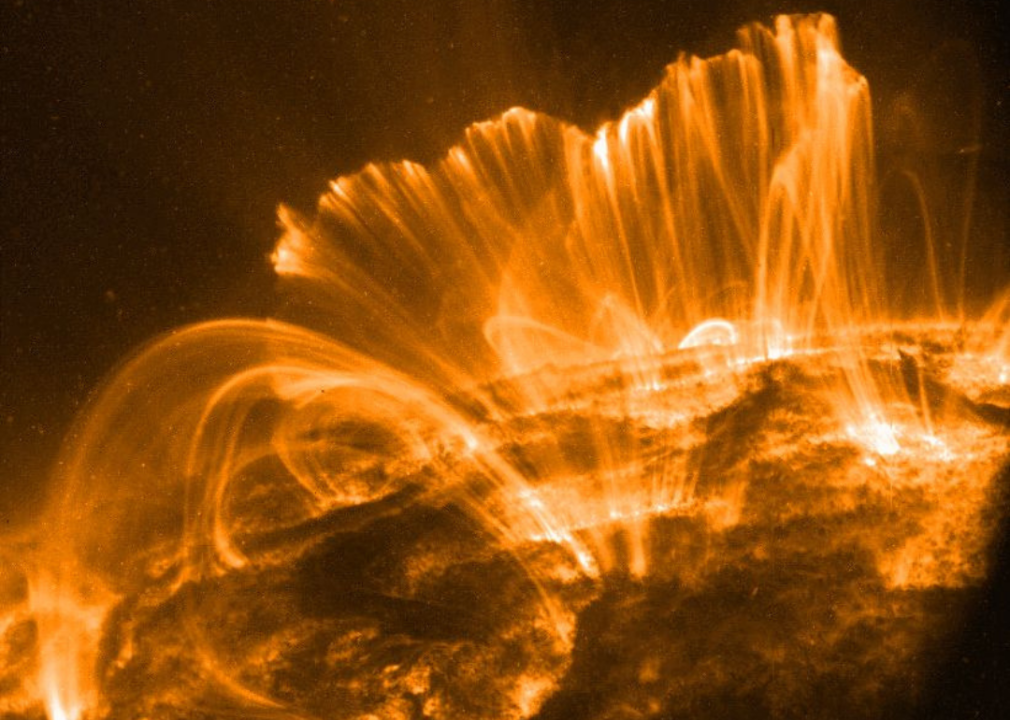 A still from a recording done by an orbiting Transition Region and Coronal Explorer (known as TRACE) telescope, this image shows a series of coronal loops extending over the sun's surface. Coronal loops, which are large amounts of hot plasma that follow the curved lines of magnetic fields, generally arc between pairs of sunspots. 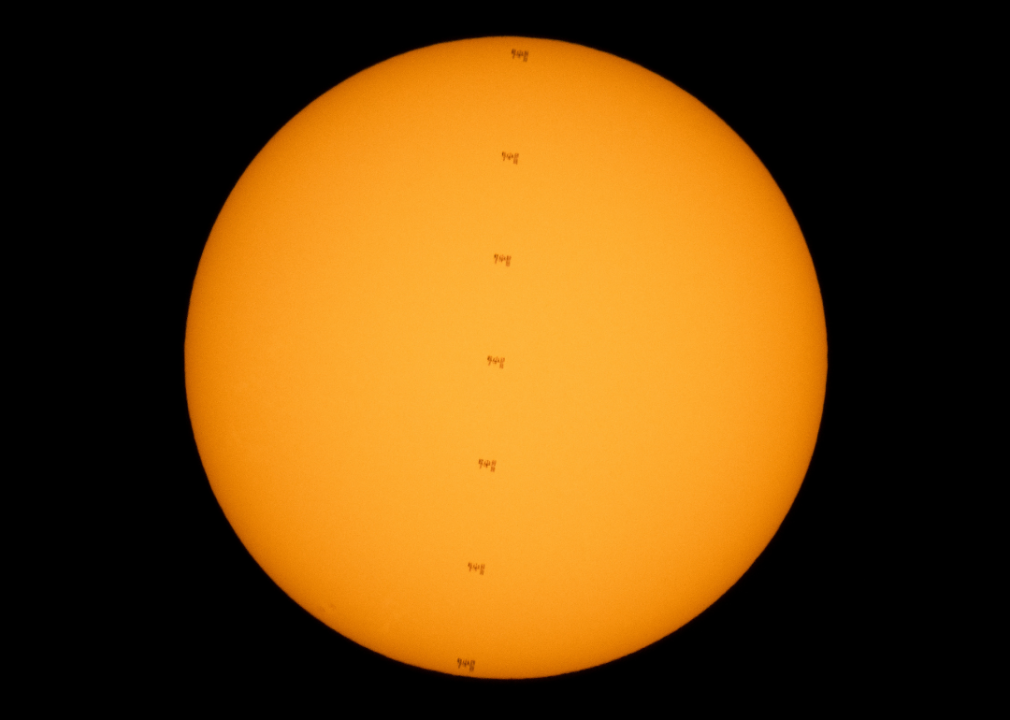 Finally, this composite photograph shows the International Space Station as it transits the sun, moving at a speed of about 5 miles per second.