Fitness pioneer Jack LaLanne in 1936 opened the first American health club in Oakland, California. The health club had a juice bar and gym complete with equipment LaLanne invented himself, such as the first leg extension machine. “The Jack LaLanne Show,” the first-ever syndicated exercise TV program., followed in 1951. The program would go on to run for more than 30 years in syndication.

Back when LaLanne started, doctors generally advised against lifting weights, reasoning that they were dangerous and did more harm than good. LaLanne was the first person to advise switching up routines every 30 days and was a pioneer in promoting fitness for women. His wellness philosophies effectively spearheaded the American fitness revolution.

As the very idea of “fitness” has evolved dramatically over several decades, so too has the popularity of exercise regimens. Some have laid the foundation for techniques and routines that are still popular today, while others have proven to be little more than fads.

Ro compiled information on major fitness regimens, trends, and activities over the last 70 years to illustrate these developments in the U.S. Research came from news reports, reports from official fitness organizations, and historical texts. While trends do catch on at different times in various parts of the world, this list, including the dates, is geared specifically toward American exercise trends.

From the neon-colored leotards and spandex of Jazzercise to people designing their own home gyms during the COVID-19 pandemic, the forthcoming trends do more than isolate workout styles. They underscore America’s cultural shifts, perceptions of beauty, and breakthroughs in technology. 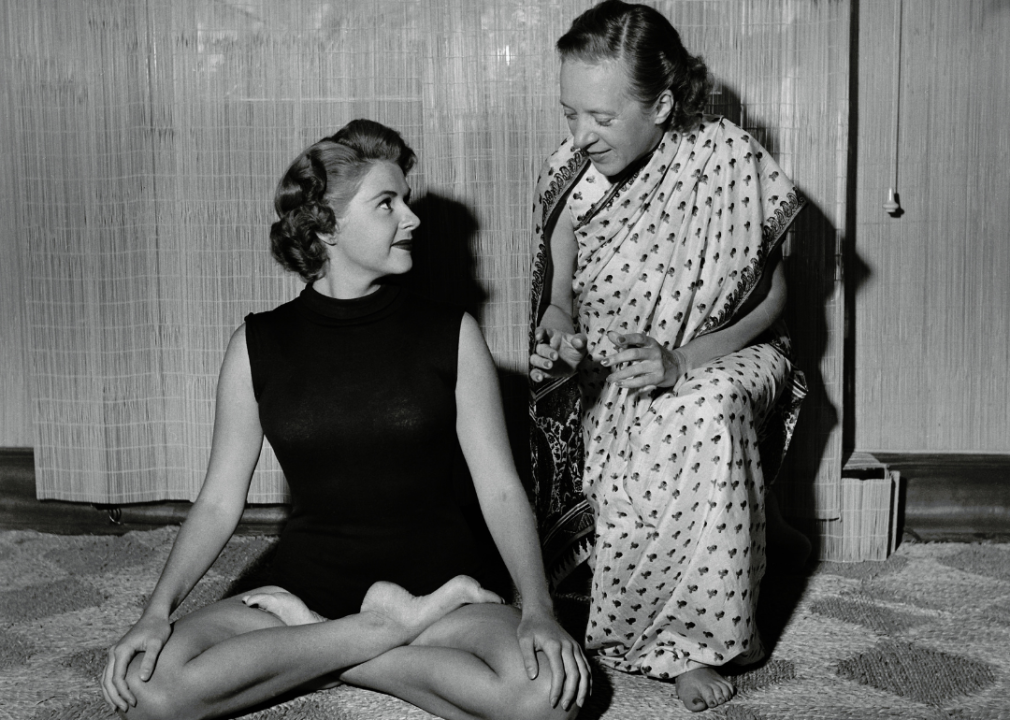 Yoga is a form of exercise that focuses on breathing, connecting posture to movement sequences, and meditating techniques. While a definitive origin for the practice of yoga is difficult to fully trace, evidence points to the pre-Vedic era (2700 B.C.) in northern India. Much wider development of various forms and disciplines of yoga has taken place over the past 200 years.

Widely credited as a yoga pioneer in America, Richard Hittleman studied in India and began teaching the practice in New York in the 1950s. He introduced yoga to millions of Americans as host of “Yoga for Health,” a television program that presented it as a fitness and spiritual exercise in a non-religious manner. He found widespread success as a guide and author of several bestselling books on yoga techniques, helping the discipline gain wide popularity.

Today, there are numerous yogic practices with their own distinct principles and techniques, employed in health centers and fitness chains across the country. Some of the most popular forms include Hatha yoga, which focuses on posture and breathing, and Vinyasa yoga, which is more vigorous. 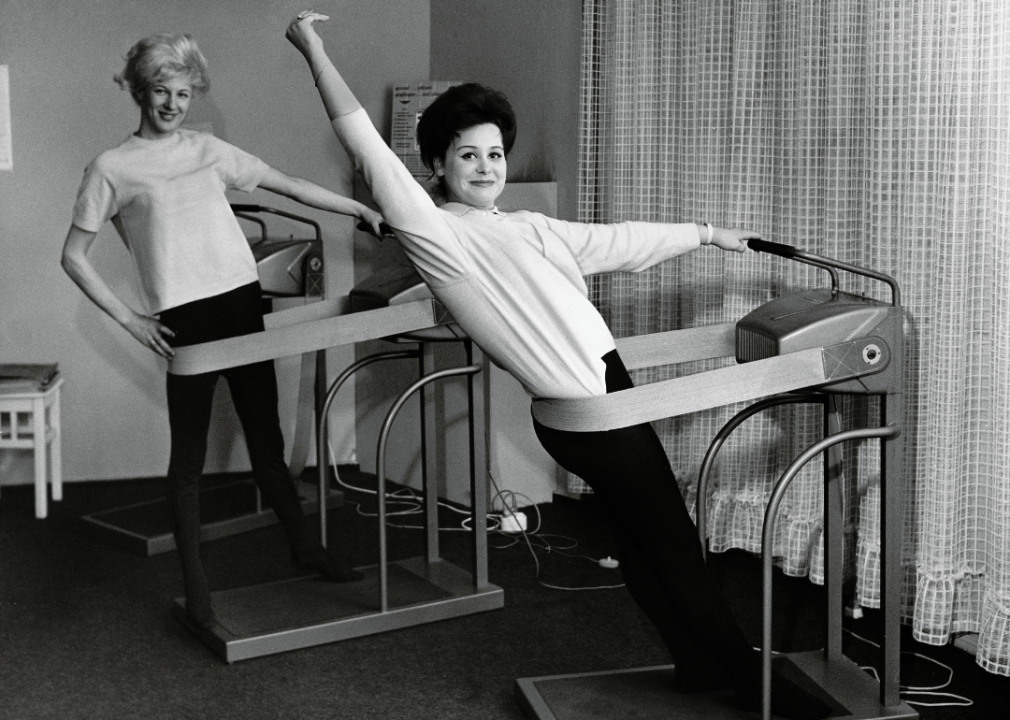 While early iterations of this contraption date back to the 1920s—and may resemble someone’s idea of a giant rock polisher—the invention was a hit in the 1960s. The vibrating belt was especially favored among those new to personal fitness, or simply looking for a quick, effortless way to “vibrate the fat away.”

For years, it’s been unclear whether the vibration belt provides the same amount of health benefits as exercise. Early vibration machines in the 1960s had a bulky strap that was supposed to loop around the waist or thighs, or any other part of the body where a person wanted to shed pounds. Users of the product grew skeptical when scientists reported that fat didn’t disappear after vigorous shaking.

Though the fad soon faded, vibrating machines are still around today, usually in the form of a platform that shakes as you stand on vibrating plates. Though it’s still not proven how much fat-burning effect they have, whole-body vibrating machines can be found at some gyms or be purchased to use in the home, though many are geared toward pain relief rather than weight loss. 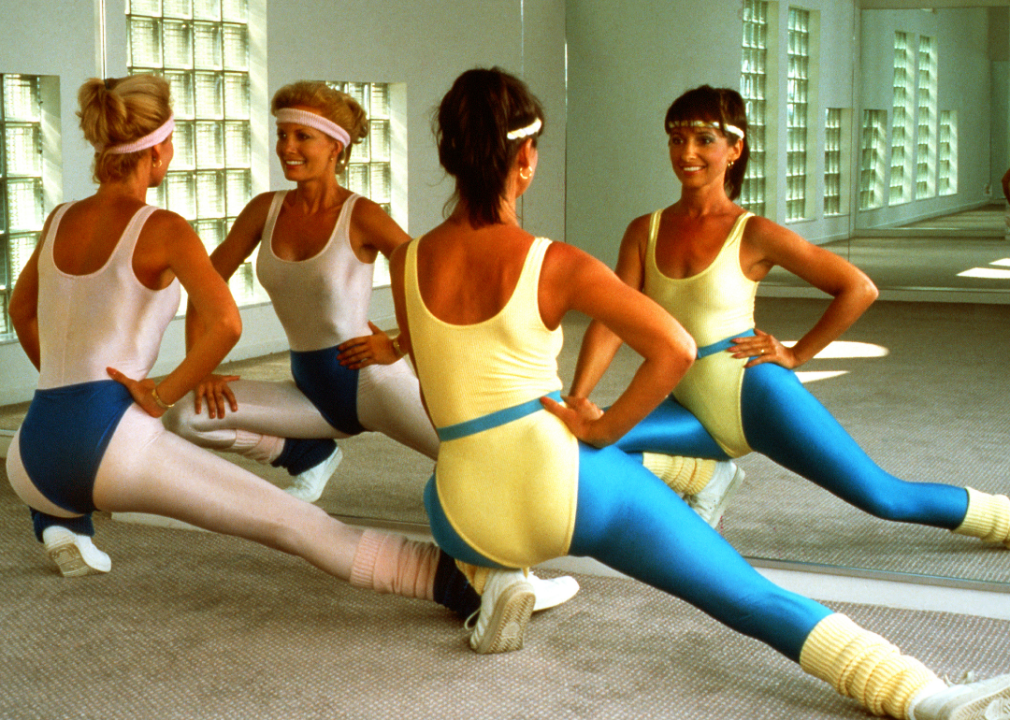 Aerobics is a type of vigorous exercise that can include brisk walking, running, swimming, or cycling to strengthen the heart and lungs. Dr. Kenneth Cooper published the groundbreaking book “Aerobics” in 1968, in which he defined this new category of fitness. In his research laboratory, Cooper studied the benefits of aerobic exercise and how it may help curb disease and improve a person's overall quality of life.

Since Cooper’s original work, the definition of aerobic exercise has expanded significantly to include mixed cardiovascular routines and, thanks to instructor Jacki Sorensen, aerobic dance routines. Aerobics got even more popular in the early 1980s when actress Jane Fonda released her first workout video, sparking another revolution in at-home fitness.

Today, aerobic and cardio workouts are standard offerings at gyms and health centers. 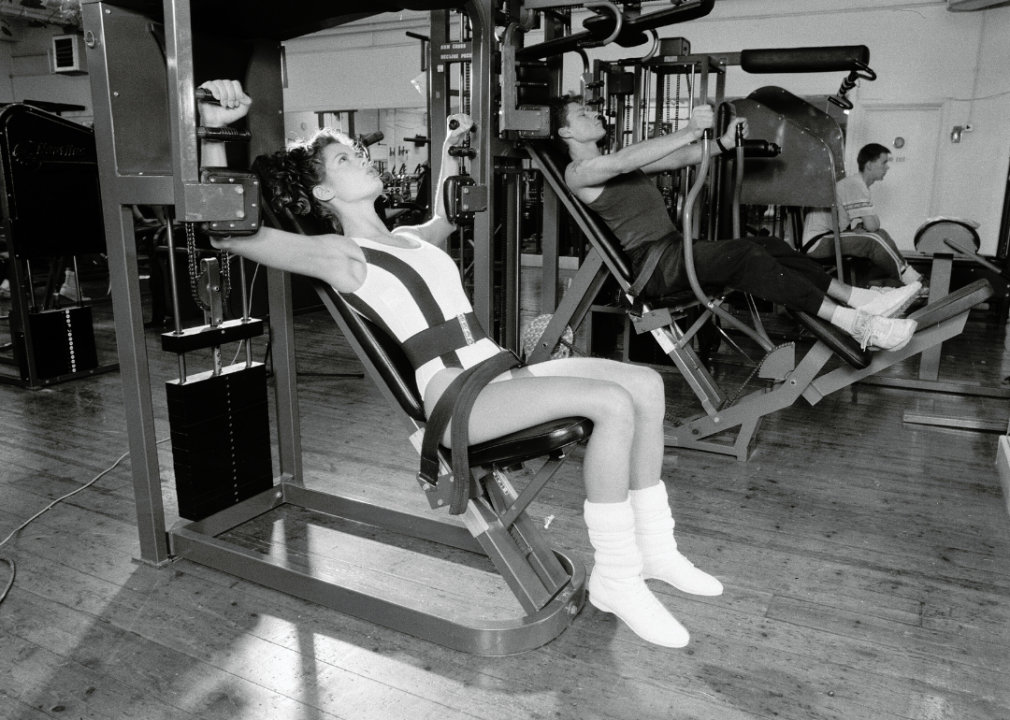 After Jack LaLanne opened the first modern gym in the 1930s and started charging people to get themselves in shape, other fitness centers such as the YMCA and local boxing clubs followed suit.

One of the legendary gyms that left a lasting impact was founded by American bodybuilder and businessman Joe Gold. In 1965, Gold opened the first Gold’s Gym in Venice, California. Dubbed the “Mecca of Bodybuilding,” the gym featured innovative weight-lifting equipment designed by Gold himself. But the gym’s claim to fame came courtesy of a 1977 documentary called “Pumping Iron” that centered on the world of bodybuilding. Featuring Arnold Schwarzenegger and Lou Ferrigno (known for his role as TV’s “The Hulk”), the film cemented the world of bodybuilding—and Gold’s Gym—in American fitness lore. Gold swiftly capitalized on the new exposure, adding the World’s Gym to his empire in 1977.

Today, there are numerous popular gym and workout centers across the U.S., including 24 Hour Fitness, L.A. Fitness, Lifetime Fitness, Anytime Fitness, and (of course) Gold’s Gym. 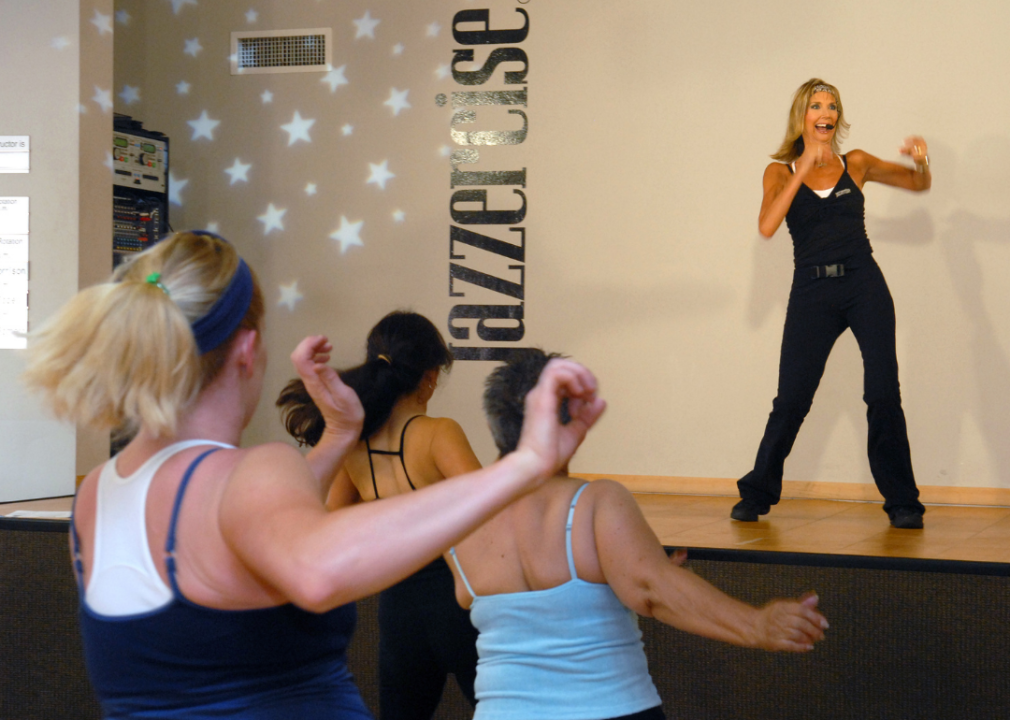 Jazzercise—a mix of dance, cardio kickboxing, and resistance training—was taught mostly in community spaces such as churches and schools. At its peak popularity in the mid-1980s, the workout method was second only to Domino’s Pizza as the fastest-growing franchise business in the nation.

Jazzercise, which synthesized dance and exercise, was created in the late 1960s by dance instructor Judi Sheppard Missett. Missett’s students were mostly military wives whom she trained to become instructors and own their own Jazzercise franchise studios. 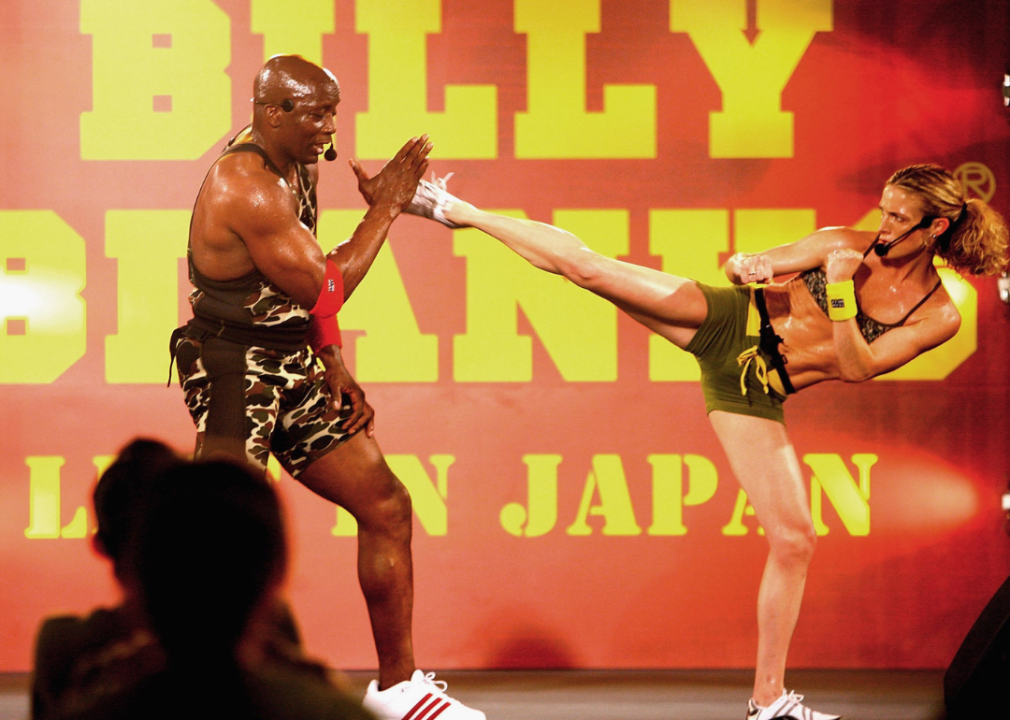 Tae Bo incorporates martial arts, boxing, and a mix of dance moves, as developed by martial artist Billy Blanks in 1976. The workout technique reached millions by the 1990s when VHS tapes were a thing and late-night infomercials were more popular.

The Tae Bo technique, which involves kicks and punches, provides a robust cardiovascular workout that tones muscles and burns calories in high-intensity intervals. In a way, Blanks is a pioneer of working out from home, as he did from his own living room in Tae Bo’s heyday in the '90s. Stay-at-home orders and increased telecommuting due to the COVID-19 pandemic brought on a resurgence of interest in home regimens. Blanks himself is even involved, this time employing Zoom as a way to connect with Tae Bo fanatics. 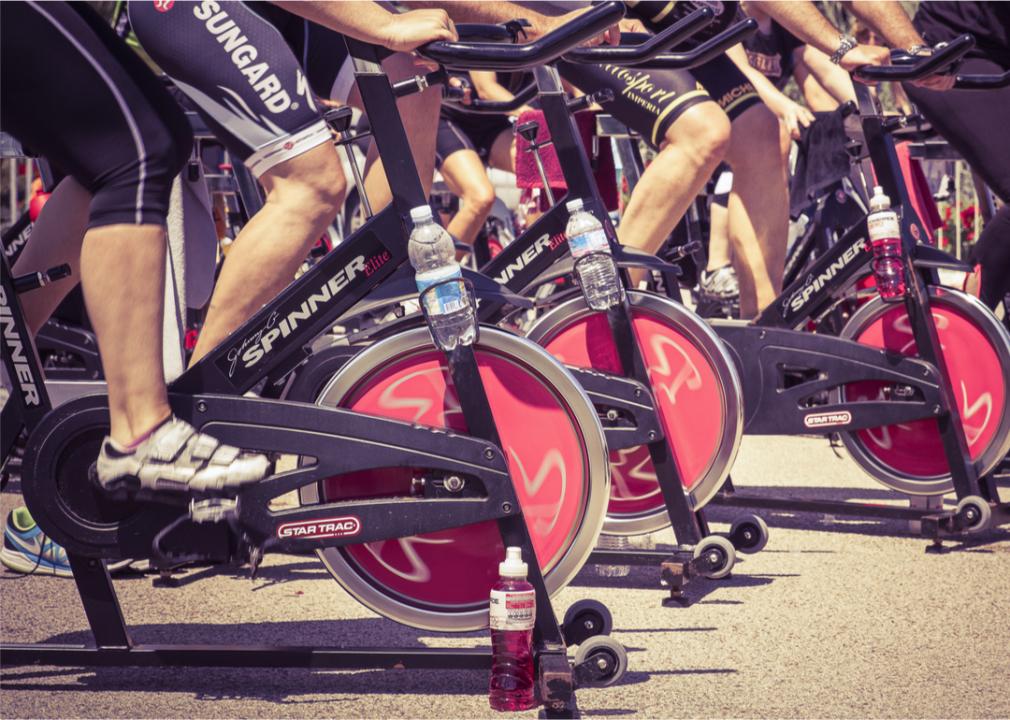 Spinning, also known as indoor cycling, caught on in the 1990s as an unintimidating mode of working out. The low-impact workout offers the added bonus of bicycling without having to worry about cars, pedestrian traffic, or bad weather.

An instructor is usually present to guide the rider through the workout, with visualization techniques in place. Spinning was introduced by Johnny Goldberg, a South African competitive cyclist who opened his first spinning center in Santa Monica, California, in the late 1980s. 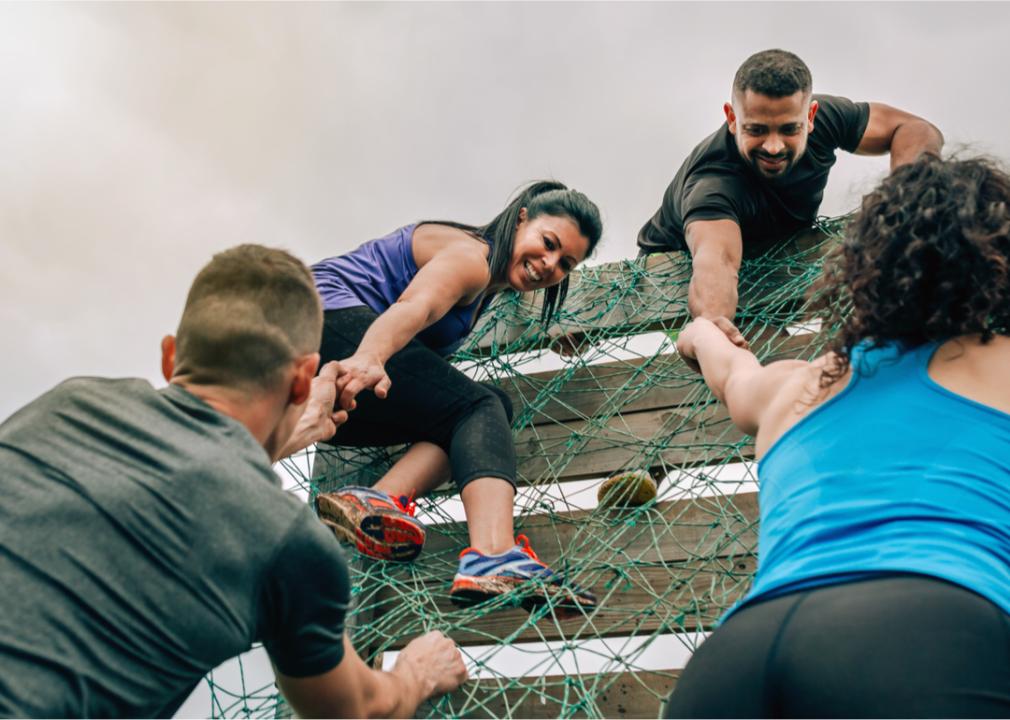 Obstacle-course racing melds traditional run or race (on land or water, or both) with additional activities, or “obstacles,” such as pull-ups, the army crawl (inching along the ground on your elbows with a flat back), a rope climb, and lunges.

One of the most popular obstacle course races is Tough Mudder, a 5k challenge that encourages participants to step outside of their comfort zone with some pretty extreme obstacles. These feats of strength build camaraderie and get athletes out of an otherwise repetitive grind of familiar reps and settings. 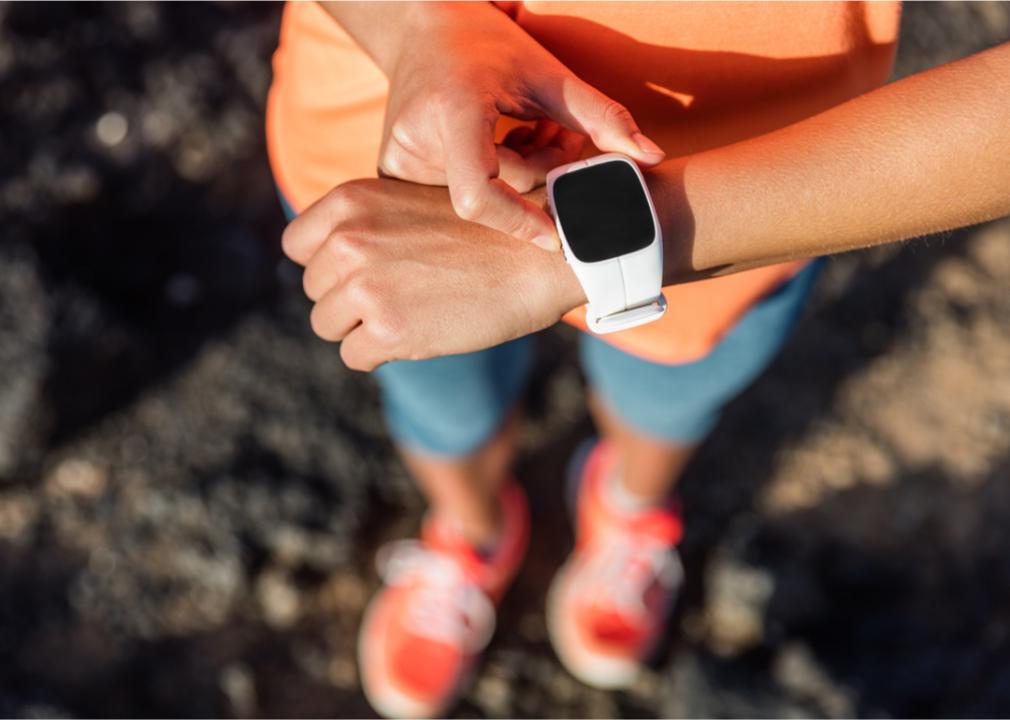 In the 1960s, Dr. Yoshira Hatano and his research team tried to figure out a way to combat increasing obesity levels in Japan. Hatano concluded that a person should take 10,000 steps each day to help control weight and achieve optimal fitness.

A pedometer device called a Manpo-kei, which means “10,000-step meter” in Japanese, was soon marketed based on his research. Despite some research suggesting the impact of the 10,000-step axiom is based on faulty science, that hasn’t stopped millions of people from turning to their smartwatches and fitness trackers to monitor the quality of their health by such metrics as heart rate, calorie intake, blood pressure, and respiratory rate—all while still keeping track of their daily steps. Although it rose to popularity in the 2010s, the American College of Sports Medicine identified wearable technology as the top fitness trend of 2022. 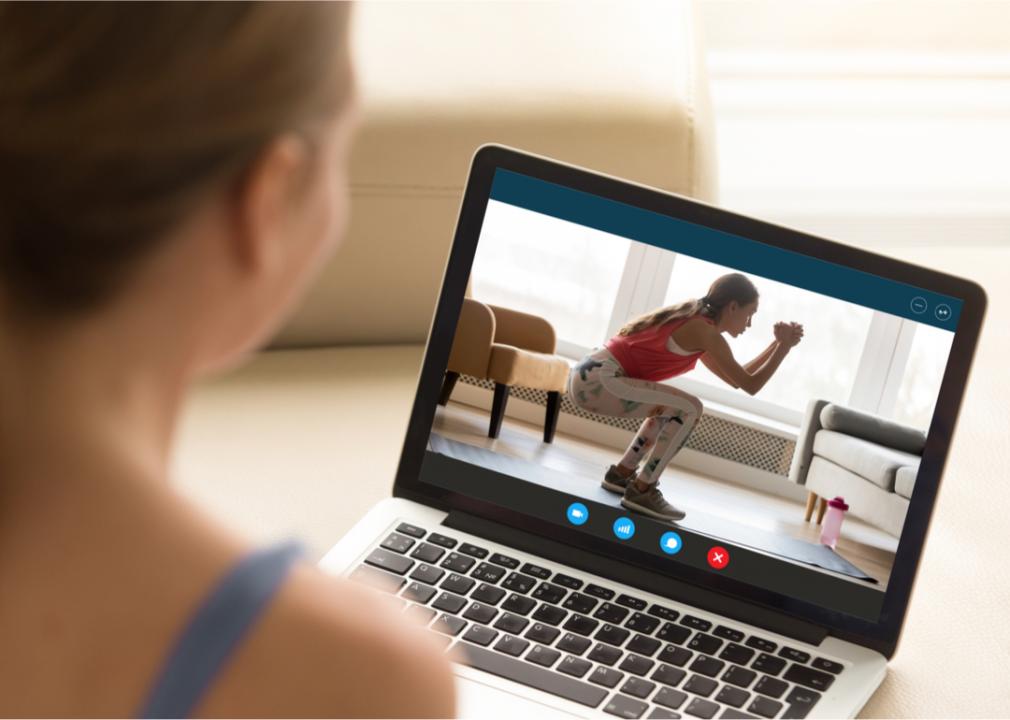 The COVID-19 pandemic has played a huge role in many people finding creative ways to stay fit at home. When gym closures began in the spring of 2020, sales of fitness equipment such as dumbbells, treadmills, and roller skates took off.

Connected equipment brands like Tonal, a wall-mounted home gym, reported a 700% year-over-year increase in sales in 2020, and connected bike manufacturer Peloton, despite some recent negative publicity, clocked $758 million in revenue during the same time. The growing popularity of home gyms and on-demand workout programs further prompted the increased download of health and fitness apps such as Mirror and Beachbody On Demand.

As of July 2021, 22% of gyms and studios had closed due to reduced enrollment; further data demonstrated that federal relief programs resulting from the COVID-19 pandemic were not aiding local gyms all that much. Although more people are returning to gyms, it’s a safe bet that the convenience of online and at-home fitness may still be appealing, helping it stick around in the years to come.

This story originally appeared on Ro and was produced and distributed in partnership with Stacker Studio.

Take the plunge: Where to get a swim workout in Vancouver during the fall and winter
Oct 4, 2022 6:50 AM