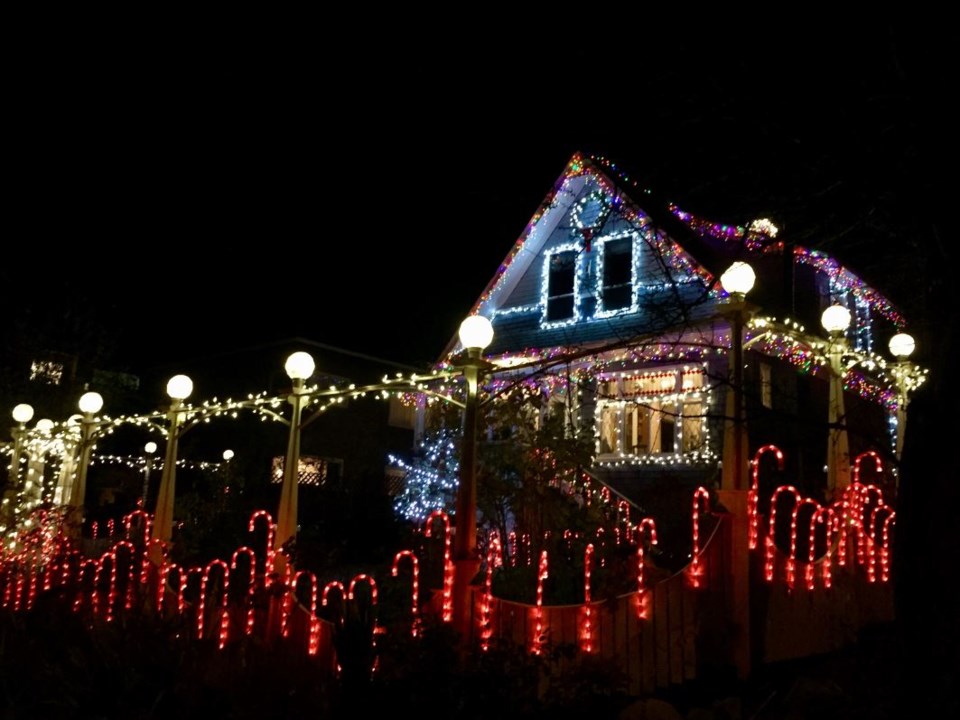 Candy cane lane: The owners of 609 Robson Ave. in New Westminster have gone all out with Christmas lights this year.Contributed

If you take time to tour around the city at night, you’ll see that festive lights adorn houses throughout the city from Sapperton to Queensborough.

The “Santa house” at 117 Seventh Ave. continues to be a favourite among locals – and, if we’re not mistaken, it would appear the homeowners have strung even more lights than usual in the trees in front of this Glenbrook North house. If you’re popping by this home, you’ll want to tour some of the neighbouring streets, where the Christmas spirit is definitely alive and well.

While there are too many houses in the Queen’s Park neighbourhood to mention, we do have to point out that the house at 316 Sixth Ave. is quite spectacular this year. We haven’t noticed this house in past year, but it’s definitely worth a look this holiday season.

Adrian Fehr and his family have gone even bigger with the display at their Brow of the Hill home at 609 Robson Ave. If you’re driving, we suggest you park on Sixth Street and walk into this tiny, no-exit street to check out this not-to-be-missed house.

“We had always wanted to have a house like this, and after years of renovation and restoration, we were so grateful for the kindness of our neighbours and community we wanted to give them a little something in return. Besides, it is simply a lot of fun!” Fehr said in an email to the Record. “Some people insisted on giving us donations, which after some discussion, we decided to pass on to a local single mother who needed a little assistance, and is doing quite well now.”

Record readers have also offered a few suggestions on places to check out around town:

Apparently, Yoda lives on at a house at 1514 Nanaimo Street, which has a “great light display” and a Santa on a Segway. The house at 527 16th Street, just off of Sixth Avenue, is also supposed to be pretty spectacular.

We’re also told that the area near 19th Street and Hamilton Street is a place you’ll want to visit.

1367
New Westminster neighbourhood aims to make Lunar New Year magical in 2021
298
Transit police seeking man who allegedly pushed woman to the ground unprovoked at SkyTrain station
232
UPDATE: Here's where you could be able to buy cannabis in New West
163
OPINION: Here's how those millionaires managed to skip the vaccination line
150
ICBC launches online tool to calculate savings with new program