Retired ornithologist Rob Butler doesn’t see New Westminster quite like the rest of us.
Feb 6, 2017 2:34 PM By: Cornelia Naylor 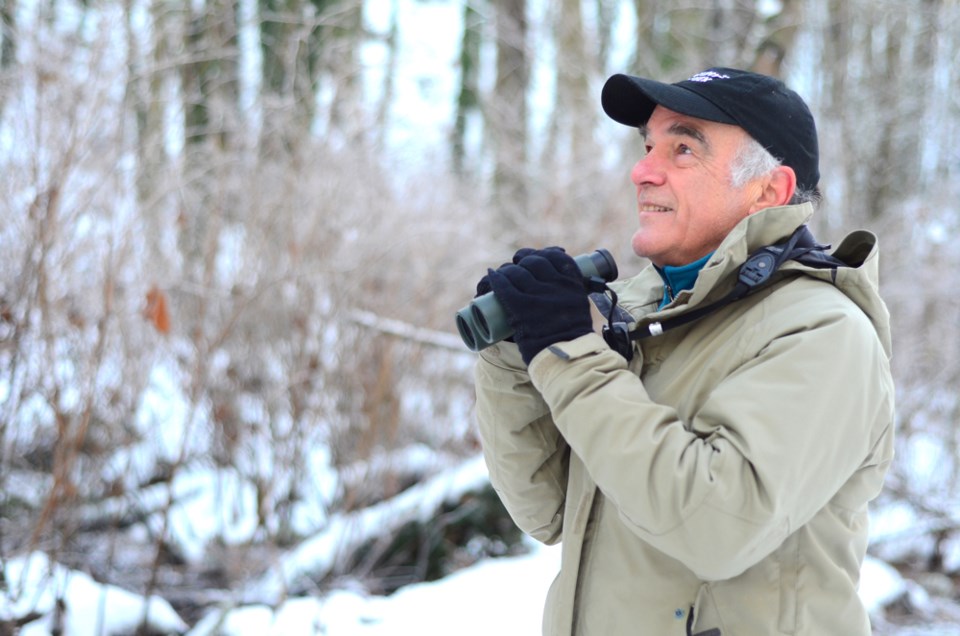 Retired ornithologist Rob Butler doesn’t see New Westminster quite like the rest of us.

While other people eating lunch at the Quay might notice a bunch of birds flying away, for example, he will spot the flash of a peregrine falcon in the mix picking off a pigeon for its own meal.

Peregrines feed heavily on pigeons, Butler says, and after a lifetime of studying and observing birds, his eyes and ears are finely tuned to pick out these things.

“It opens up a new dimension on the world,” he says. “I’m always surprised by this – that I see all this stuff all the time, and I’m talking to my neighbours, and they say, ‘Where? What? Show me.’ It’s a different world, and people aren’t aware of it.”

Walking through Glenbrook Ravine or Queen’s Park, Butler doesn’t even need to see birds to know which species are hanging out there.

“Most of it is hearing,” he says. “It’s mostly bird hearing rather than watching, so you have to know all the songs.”

It’s not something you can un-hear after you retire, of course, and Butler has spent considerable time after his 40 years as a research scientist with the Canadian Wildlife Service studying local bird life.

He’d like the city to make use of his work and adopt an official bird strategy – like Vancouver and Delta have – but city officials haven’t shown much interest so far.

“They have been slow on the uptake on this,” Butler says.

With birding and bird-based tourism among the fastest growing recreational activities in the world, he says the Royal City is missing the boat, especially with the 27th International Ornithological Congress set to come to Vancouver in August 2018.

The massive conference has been held every four years since first being hosted in Vienna, Austria in 1884 and is expected to attract thousands of ornithologists to the area.

“People from all over the world are coming,” Butler says.

New West won’t attract a lot of attention for exotic species, he says, but people are increasingly interested in what cities are doing for their birds.

“If we had a bird strategy, it might be different because there’s people who are going to be looking at this and how are the cities designing them to make them more bird friendly,” Butler says.

Essentially, a bird strategy is more about mindfulness than big projects, according to Butler.

Tall trees, especially native conifers are a “real magnet” for certain birds, for example, and leaving shrubs and grasses attracts other species.

“For example, if you go into Queen’s Park, you’ve got the big conifers, so you get the ones that live in the canopy, but there’s no understory, so all the ground birds are gone,” Butler says. “By changing that vegetation, you’d have different species.”

Water is important too.

Dealing with drainage issues in Queensborough, the city could try to create small marshes or ponds instead of building ditches or covering over the water.

The city could even encourage residents to arrange their yards and even their patio hanging baskets to attract birds.

If city officials did decide to pursue a bird strategy, New Westminster has one advantage no other city in Canada has, thanks to Butler.

From May 1 to Aug. 31 in 2012 and 2013, Butler criss-crossed the city with his bicycle, binoculars and notepad and created a comprehensive New Westminster Breeding Bird Atlas.

He used the same protocols and techniques employed to make the B.C. Breeding Bird Atlas, a project he worked on from 2007 to 2014, by Bird Studies Canada, Environment Canada, the B.C. Ministry of Environment, the British Columbia Field Ornithologists, the Federation of B.C. Naturalists, Louisiana-Pacific Canada Ltd. and the Pacific Wildlife Foundation.

“I thought, I’ve got a bit of time here,” Butler says. “I live here, so I’ll set this up and do one. I thought, New West is small enough. I can do it all on my bicycle. I ride all over the place anyway. I can combine them.”

During the so-called “dawn chorus” in spring and early summer, birds start singing about half an hour before sunrise to mark out their territory, so Butler began his route at about 4:30 a.m. and worked till about 10 a.m.

Using a GPS, he started at Hume Park near his house and stopped every three-quarters of a kilometre.

At each spot, he stopped for five minutes and recorded every bird he saw or heard in his notebook.

“Every bird in the world has that four-letter code,” Butler says. The North American Robin, for example, is AMRO.

“That tells me they’re feeding young,” he says.

Based on these behaviours, each bird observation was scored as a possible, probable or confirmed breeding species.

For statistical purposes, each five-minute recording session represents a sample.

The result of all his labour is a bird map that details the distribution of all the species seen or heard during the 2012 and 2013 breeding seasons.

It’s part of a growing body of evidence that urban landscapes can harbour “impressive proportions” of a region’s bird life, according to the atlas’s introduction.

Butler estimates about half the species in the Greater Vancouver area are represented in New Westminster.

“That’s a substantial amount when you consider it’s an urban landscape,” he said.

With the Fraser River delta among the most important bird areas in Canada, finding ways to accommodate birds in river cities like New West is vital, according to the local bird expert.

Having studied field notes from a local ornithologist who worked in the Royal City in the 1930s and 1940s, Butler says the area has already lost much of its bird life, including species like the Lewis’s Woodpecker, Screech Owl and Ruffed Grouse, but he’s hopeful a bird strategy could stem the losses.

“It is kind of troubling that these species are gone because it’s all because of urbanization,” he says, “but I think we can turn the corner a bit on some of this by just doing what I’m saying – planting for them, giving them more space.”