New Westminster’s Remembrance Day ceremony will feature many of its traditional elements – minus the crowds – in 2020.
Oct 14, 2020 12:01 PM By: Theresa Mcmanus 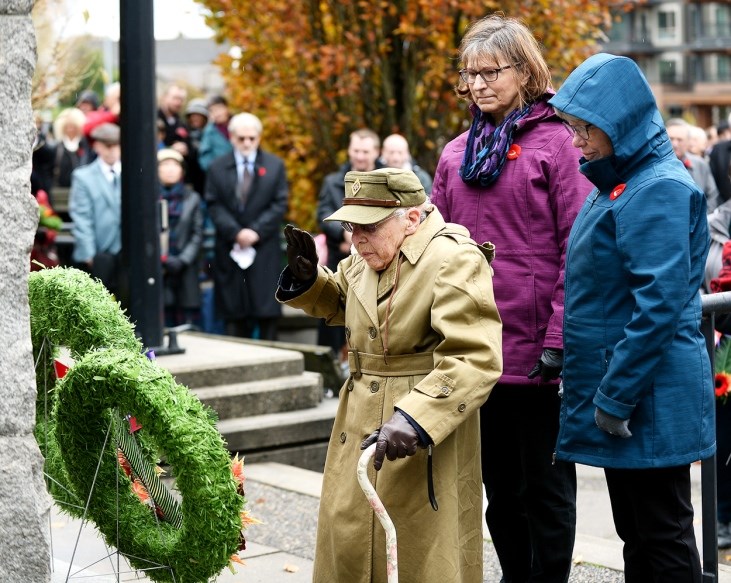 Annie Mary Gillies Hokonson, who served with the Canadian Women's Army Corps in Canada, Holland and Germany during the Second World War, was among those who attended New Westminster's Remembrance Day ceremony in 2017. The City of New Westminster, the Royal Canadian Legion and The Royal Westminster Regiment have been working on plans for an online ceremony for Remembrance Day 2020.

New Westminster’s Remembrance Day ceremony will feature many of its traditional elements – minus the crowds – in 2020.

The City of New Westminster, the Royal Canadian Legion and The Royal Westminster Regiment have been working together to develop COVID-friendly plans for this year’s ceremony. A virtual event will be live-streamed on Wednesday, Nov. 11.

“There will be partial elements of the program that will be prerecorded and incorporated into the live-stream event on Remembrance Day,” said a staff report to council. “There will be no viewing at the cenotaph on the day; the community will be encouraged to pay tribute to our veterans from their homes.”

The ceremony will include opening remarks from Mayor Jonathan Cote, a memorial address and two minutes of silence. The Royal Westminster Regiment Band will play The Last Post, two pipers will play Lament and students from a local school will recite In Flanders Fields.

Lisa Kemp, the city’s acting special events coordinator, said musical components of the ceremony, including the singing of O Canada and God Save the Queen, will be pre-recorded, as will the poetry reading.

While most of the components from the live ceremony are included in this year’s event, the parade from the regiment to the cenotaph in front of city hall won’t take place.

Kemp said organizers of this year’s virtual ceremony have tried to preserve components of past ceremonies, but have also tried to re-imagine the event by including new programming for the virtual event. This includes children’s artwork related to Remembrance Day and a poetry component featuring the Royal City Literacy Arts Society.

“We are very much reimagining and trying to take something positive from this,” she said. “The positive is, we are trying to involve as many different community groups and community members as we can because we have a new format and there is some space we have to fill on the video.”

The Royal Canadian Legion, which raises funds through its annual poppy and wreath sales, has had to find new ways to get those items to the public. Wreaths are still available, but a group of youth has been designated to place youths at the cenotaph.

COVID-19 has also impacted the local Legion’s annual poppy sales, which are often supported by cadets who sell poppies at locations around the city. The current plan will see Legion officials selling poppies outside Royal Square Mall and Westminster Centre in the days leading up to Remembrance Day.

Details about the virtual ceremony are being finalized, but it will be shown on the city’s Facebook and YouTube pages. Links will be posted on the city’s website at www.newwestcity.ca.

The city is also developing programming as part of Veterans’ Week, which runs from Nov. 5 to 11. The city’s museum and heritage services staff are working with the New Westminster Heritage Preservation Society to put together a self-guided walking tour that will include stops at landmarks that have a connection to Remembrance Day, such as the Armoury and the Fraser Cemetery.

1226
New Westminster neighbourhood aims to make Lunar New Year magical in 2021
284
Transit police seeking man who allegedly pushed woman to the ground unprovoked at SkyTrain station
231
UPDATE: Here's where you could be able to buy cannabis in New West
169
ICBC launches online tool to calculate savings with new program
156
OPINION: Here's how those millionaires managed to skip the vaccination line