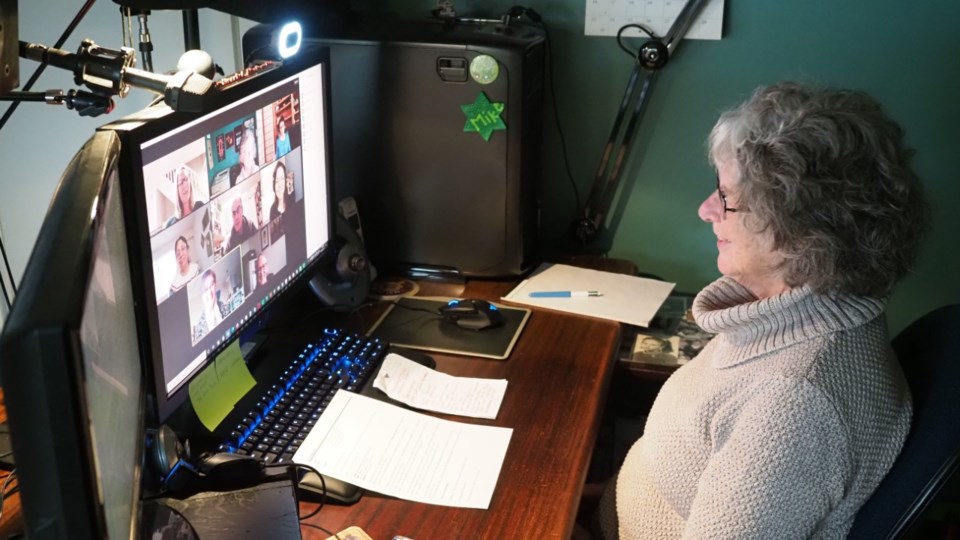 Val MacDonald has been facilitating her program, Virtual Ideas, at Century House. It’s one of many online initiative launched as a way of keeping seniors connected during the pandemic.Contributed

The COVID-19 pandemic has forced some seniors to try out technologies they may never have dared to try in the past.

In response to gathering restrictions and other COVID protocols, Century House has had to change up its programming by moving some offerings online and adding new programs to the mix.

“We are really excited about it,” said Tim Hicks, a volunteer at Century House. “It’s gone way beyond what we thought was the best we could possibly do. People with no choice simply said, ‘Well, I am going to have to learn this.’ Many, many of them have said, ‘Well, that was easier than I thought it would be.’”

Hicks started overseeing and reviving Century House’s website about 13 months ago. That’s evolved into becoming the “tech guy” who helps get various programs running online – a role that’s keeping him plenty busy during the pandemic.

“Really, I don’t know where we’d be without the pandemic. We might not be doing any of this video stuff yet. We wouldn’t be using Zoom much,” he said. “We have gone from about 200 people following the website to 450.”

As Century House has had to pivot to online programming during the pandemic, it’s keeping its members in the know about current offerings and COVID-19 protocols via regular updates on its website. The website is also where folks will find content such as recordings by the Century House Players’ drama group.

Century House has also expanded its social media offerings during the COVID-19 pandemic, including the launch of the Facebook Good Cheer Group

“We had a Century House presence on Facebook but it was not doing anything,” Hicks explained. “We decided rather than building that up we would open a new group called the Good Cheer Group and it would accept posts only designed to make people smile. We put up jokes and cartoons, puzzles, funny stories and inspirational things.

Early in the pandemic, Hicks learned how to use Zoom and has since helped to get others started in the technology that’s really taken off during pandemic. One of Century House’s popular Zoom programs is the weekly Coffee Break With Shelly, where folks join Shelly Schnee, the city’s program coordinator for seniors, for a Zoom visit where they chat, do activities and hear from special guests.

Hicks, who worked in corporate communications prior to his retirement in 2009, is happy to be putting the skills he developed in his work life to good use in retirement.

“A lot of us are realizing, ‘Hey, we can still use these skills,’” he said. “One of the things that we are getting is people are stepping up in the Octopus program and they are leading workshops in things they are comfortable with.”

Local seniors have shared their knowledge on a variety of topics with their peers through the Octopus program, which is available on Zoom.

“They are bite-size pieces,” Hicks said of the Talk New West segments. “I think the longest one is 15 minutes.”

Hicks, who is the “guy behind the scenes” helping to get new programming into the homes of seniors, is impressed with the way people have embraced technology.

“Very impressed,” he said. “I think people have surprised themselves. People are using all kinds of devices and so on. We were hoping to pair up with the library, for example, and other people who were doing in-person training. That was our goal and our intent, and it still is. Someday we will get there.”

In the future, Hicks anticipates Century House will be able to do hybrid workshops that allow people to attend in-person if they’re conformable or via Zoom if they’re be more comfortable taking part from home.

During the pandemic, much has been learned about seniors’ needs for technology, including the need for one-on-one support to learn about various devices.

“The seniors told us very clearly that that is what they would like,” Hicks said. “We had to learn that seniors don’t go at the same pace. … You have to be prepared to go more slowly and let them discover it for themselves and be there to help.

Hicks is a member of the Seniors Embracing Technology Group at Centre, which hopes to help seniors become more comfortable with technology.

“The whole goal is to provide training and support for the seniors who aren’t as technology savvy as we are,” he said. “We want to reach down and pull people up behind us if we can.”

While technology is helping some seniors to stay connected with their family and friends, not everyone is able to do that, Hicks said.

“We are still concerned about the people who don’t have technology and haven’t even made the first step,” he said. “Some of us are working with city committees, Telus and people like that trying to get technology into the hands of people who can’t afford it.”

For those who have already have access to technology, Hicks urges them to give it a try – even if it’s something new to them.

“All I can say is, if you haven’t tried it, go and talk to some of your friends who have,” he said. “I think you might change your mind.”