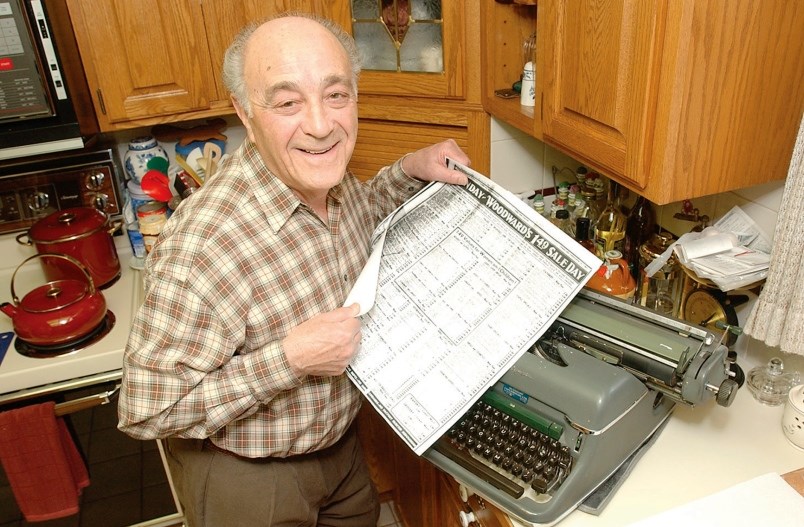 Tony Antonias, a former Citizen of the Year and Bernie Legge Cultural Award winner, passed away Jan. 25. He was 89.

Tributes are pouring in for a man who was a devoted booster of New Westminster and a promoter of local arts and culture offerings.

Tony Antonias, known to many as the man who wrote the famous Woodward’s $1.49 Day jingle that ran on the airwaves for decades, passed away Jan. 25 at Royal Columbian Hospital at the age of 89. Antonias was the first of only two residents to receive two of the top awards bestowed on local citizens – the New Westminster Citizen of the Year (2007) and the Bernie Legge Cultural Award (2000).

A celebration of life is on Saturday, Feb. 23 at 2 p.m. at Massey Theatre in New Westminster. In lieu of flowers, donations to the Royal City Musical Theatre or Massey Theatre Society are appreciated.

“Tony took care of a great deal of real business as a volunteer. He had a strength of character and intention which, when coupled with his creative talent and business savvy, became fundamental to the arts and culture in New Westminster, and beyond,” said Jessica Schneider, executive director of Massey Theatre. “Tony was devoted to the Massey Theatre. Tony’s council presentations and advocacy are a key part of why the theatre still stands today and has incredible local productions within it. A greater ally and supporter there could never be. I was truly blessed to encounter this man along my journey and I am changed for the better because of Tony.”

When Schneider arrived in New Westminster to begin her work at the theatre in 2006, she found a message and welcoming gift awaiting her from Antonias.

“Our first meeting he drove me around town describing ‘who was who in the zoo’ and everything I needed to know about the community at that time,” she said. “What a tremendous gift that was to me. And, a wonderful collaboration and friendship was born that day.”

Antonias started working in the radio business in his native Australia, and landed a job at CKNW in 1955 after moving to Canada. During his time at CKNW, he served as its creative director for nearly four decades and wrote hundreds of radio ads.

Last February, community members were invited to a small reception in the foyer of New Westminster City Hall to celebrate the 60th anniversary of the Woodward’s jingle, which Antonias wrote on Feb. 17, 1958.

The $1.49 Day jingle – featuring Antonias whistling – was a hit for Woodward’s as soon as it hit the airwaves that April and would go on to be recorded in multiple languages. In 1961, the Hollywood Advertising Club in California awarded Antonias an International Broadcasting Award for creating one of the World’s Best Broadcast Advertisements.

Antonias, who loved symphonic music, was honoured by the Vancouver Symphony Orchestra in 2011 for his five decades of work on the VSO’s radio advertising.

Antonias, often stopped on the street by strangers who addressed him as “Mr. $1.49 Day,” was a longtime promoter of local events on both CKNW and in the community. The city’s Canada Day celebration, the New Westminster Symphony Orchestra, the former Raymond Burr Performing Arts Centre and Royal City Musical Theatre were among the causes he championed.

A longtime member of the city’s arts and culture commission, the local arts advocate often appeared before city council to spread the word about events happening in New Westminster.

“Tony will be greatly missed in our community,” said Mayor Jonathan Cote. “His passion and love for the arts and his community shone through in everything he did.”

Antonias, who sat in the front row of council chambers for many years, was an avid council watcher and one of the city’s strongest advocates, not only for the arts community but for New Westminster, Cote said.

“I still remember when I first got elected mayor, Tony requested a meeting with me because he wanted to help me speak. With any other person I might be a little bit put off or maybe a bit offended, but with Tony I accepted the meeting. He wanted to make the point to me that many folks at home can’t hear me, I talk too fast, I’m not clear, I don’t enunciate my words. So he pulled out an old suitcase that looked like it came from his CKNW days and out came a bunch of radio scripts from jingles and ads that he’d written from CKNW. For the entire half-hour meeting, he had me practising these particular radio scripts until I could enunciate them slow enough and clear enough so that they could be read properly. … That one story resonates to me – it just shows the type of dedication that Tony Antonias gave to our council, gave to our community. He will be sorely missed.”

Candice James, who served as New Westminster’s poet laureate from 2010 to 2016, said Antonias will forever be missed by many people in the arts community. She said he was instrumental in shaping the arts scene in New Westminster and was present behind the scenes for many New Westminster happenings, freely giving of his time to volunteer to help his community.

“I truly admired, respected and loved Tony Antonias and consider my life mightily enriched simply by his presence in it,” she said. “In my humble opinion, the city will always be missing something without Tony Antonias in it. R.I.P. my friend… we will meet again!”

Janet Kvammen knew Antonias from his attendance at community and World Poetry events at the library.

“He would often read the work of some of his favourite poets including Robert Service, Aussie Bush poet Banjo Paterson’s The Man from Snowy River and Longfellow's Song of Hiawatha,” she recalled. “We loved meeting him when out for a walkabout. He always had a great story to share. Tony was so much more than a 'jingle man’. I will always remember him for his kindness, and for his enthusiasm and passion for the arts. We will miss him.”

To view a video of Antonias speaking about the jingle - and to hear it for yourself - go to www.newwestrecord.ca/community/video-tony-antonias-relives-the-day-he-wrote-the-1-49-day-jingle-for-woodward-s-department-store-1.826166.

1307
New Westminster neighbourhood aims to make Lunar New Year magical in 2021
292
Transit police seeking man who allegedly pushed woman to the ground unprovoked at SkyTrain station
224
UPDATE: Here's where you could be able to buy cannabis in New West
158
OPINION: Here's how those millionaires managed to skip the vaccination line
148
ICBC launches online tool to calculate savings with new program