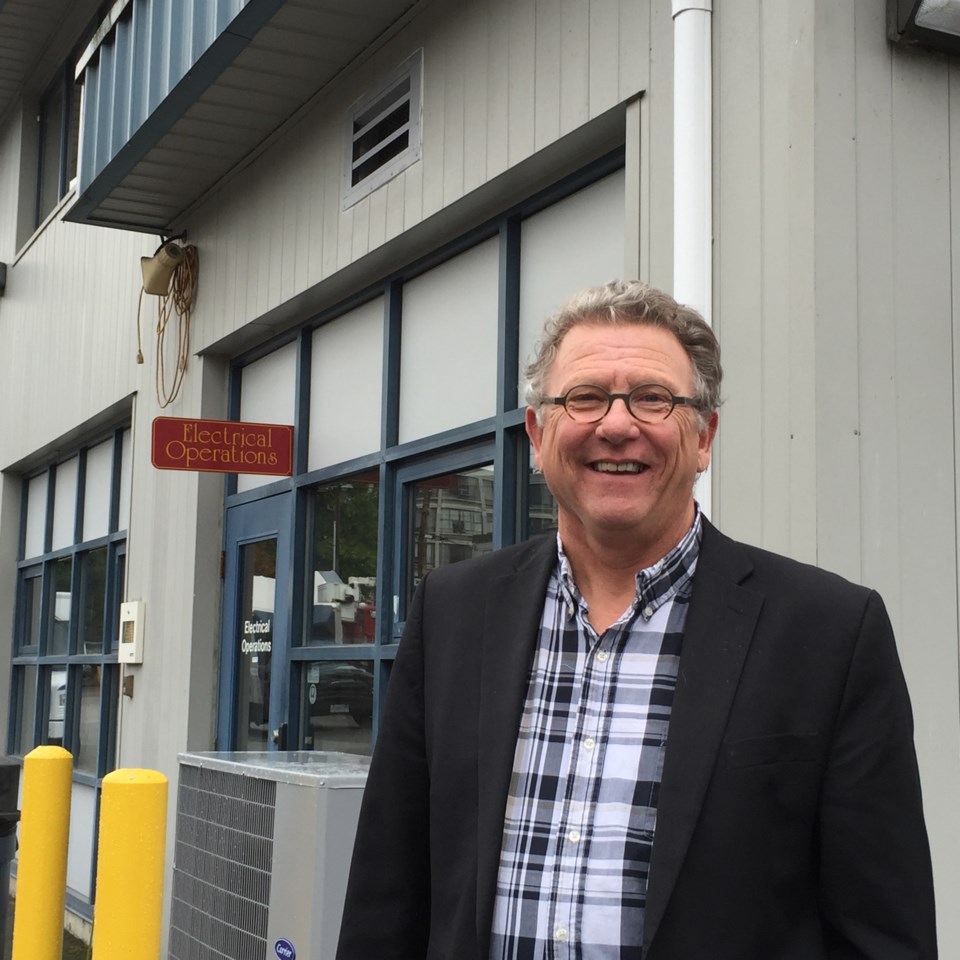 Rod Carle, general manager of the city’s electrical utility, is exploring the creation of a solar garden atop the office at the city's operations yard.Theresa McManus

The New Westminster Electrical Utility is charged up about its 125th anniversary and is inviting citizens to join the celebration.

The Light Department, founded on Jan. 2, 1891, is now known as the City of New Westminster Electrical Department.

“We are the oldest utility in B.C., certainly older than Hydro,” said Rod Carle, general manager of the city’s electrical utility. “We are 125 years old.”
The electric utility invites community members to attend an open house on Saturday, Oct. 22 from 2:30 to 4:30 at 905 First St.

“New West substation was rebuilt over the last two-and-a-half years. We had road closures and stuff out front,” Carle noted. “We thought it’s a chance for us to invite the public in to our operations and see what really goes on.”

The public will get a chance to enjoy a barbecue and birthday cake, check out some of the electrical utility’s vehicles and equipment and a traffic display, view some historic memorabilia and take in an electrical safety demonstration. In honour of the anniversary, the parks department has created a special garden display at the entrance to Queen’s Park and the electrical department has created special banners that adorn poles near the work yard.

“I wanted two different ones. One representing the distribution side and the other one representing the services side,” Carle said. “We are split up into those two major departments – electrical services that does all the street lighting, all the traffic lights and all of the maintenance repairs at all of the city facilities. Distribution is all the feeders and stuff that feed the city.”

Carle is also collaborating with former city planner Stephen Scheving on a book about the department, The Lights in the City, which is expected to be published in early 2017. New Westminster is one of a handful of B.C. communities, including Nelson, Grand Forks, Penticton and Summerland, that have their own municipal utilities.

The City of New Westminster Electric Utility has an electrical supply agreement with B.C. Hydro, which allows it to buy electricity at a wholesale cost and sell it to municipal customers. Many residents are proud of the fact that when other communities lose power, New West is often still powered up.

“We have a really rigorous maintenance program. That’s probably one of the reasons why we don’t have a lot of power outages. We put a lot of time, effort and funds into maintaining the lines every year,” Carle said. “That’s paid off for us bigtime.”

In the massive windstorm of August 2015, city crews were quick to respond to power outages while some Lower Mainland residents were without power for more than a week.

“One of the problems wasn’t our line. It was a Hydro line, and it was hours before we could get someone here to deal with that,” Carle recalled. “Other than that, we had a few poles come down on Royal Avenue. That was the worst we had, and we had that back up the next day. We had four or five other key areas we were able to put back on right away. And then we had to rebuild the line on Royal – we just needed a little more time for that.”

Carle, who has worked in the utility field for nearly 40 years, said most of the changes he’s seen in the industry relate to governance models and energy conservation.

“When I first started in the utility, we gave away electric heaters. We wanted people to use electricity because you are in the business of selling electricity,” he recalled. “On the conservation side, they say it cost you less to save a kilowatt than to build a kilowatt, i.e. Site C. If we could get everybody to save, we wouldn’t have to pay huge prices for Site C and building new power.”

While the Electrical Utility is proud of its long history in New West, it’s also looking at a future that could include new two new substations (but not until 2021 and 2035) to meet the city’s needs as the population increases.

BridgeNet, the city’s new open access fibre network, and a potential district energy system in Sapperton could also fall under the utility’s domain in the years ahead.

664
New West sees big jump in COVID-19 cases
331
A cafe helping people in need says pay what you can
249
Opinion: Now NIMBYs are whining about shadows from new housing
218
Filming in New West: A bright spot in a challenging year
175
New West athlete remembered for her zest for life