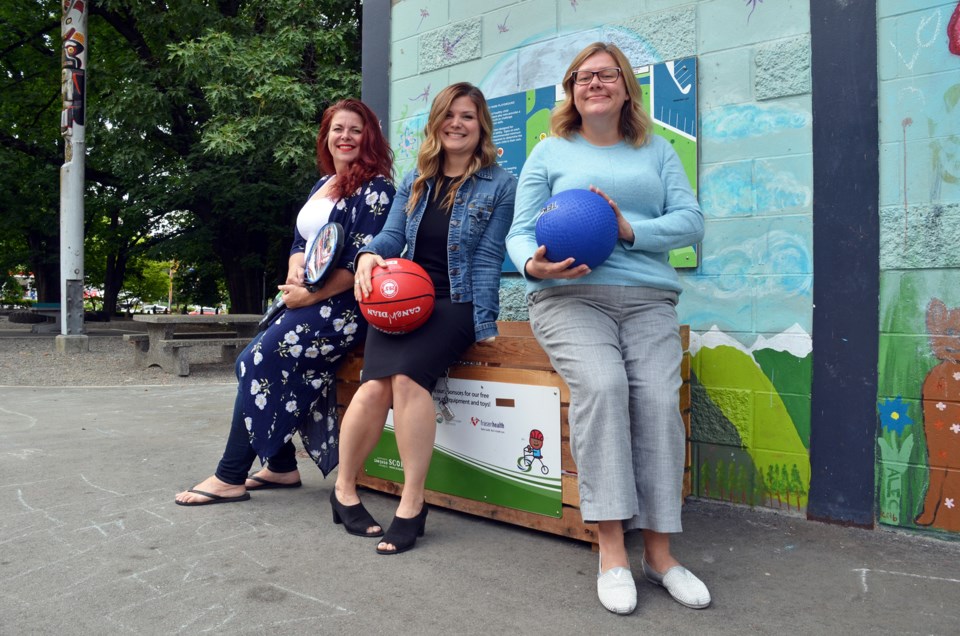 The city’s four playboxes are getting a helping hand this summer thanks to New Westminster’s business community.

“A great thing that businesses can do is they can actually help the community in a variety of ways, and one way is financially. And the Uptown Business Association, we have a box here in our area and downtown has a box in their area, and so that was a perfect fit,” Jeffery told the Record.

“It was an easy ‘yes,’” she said of the decision to sponsor the boxes in partnership with the Uptown association.

The four boxes were installed in May at Grimston Park, Hume Park, Moody Park and École Qayqayt Elementary School.

They came full of toys and sports equipment, but less than a week after they arrived all the boxes turned up empty.

The intent of the boxes is to get the community to take ownership of them and have residents keep them stocked, according to City of New Westminster recreation programmer Sloane Elphinstone.

“We’re always trying to find ways to benefit community, and when this story broke it was obvious that the business community can help,” Johnston said.

Throughout the summer, the business associations will keep the boxes stocked with basketballs, soccer balls, flying discs, jump ropes, hula hoops and other outdoor equipment. The hope is that, come the end of September, the associations will have inspired another group to take over sponsorship of the boxes, Jeffrey said.

“The idea is that this is our community and we want to make sure everybody can play. And if you can help, which we can do, then do it. It’s simple. It’s not a lot of money, it’s not a lot of time,” she added.

Opinion: This is how even young people are destroying their hearing
May 9, 2021 8:38 AM