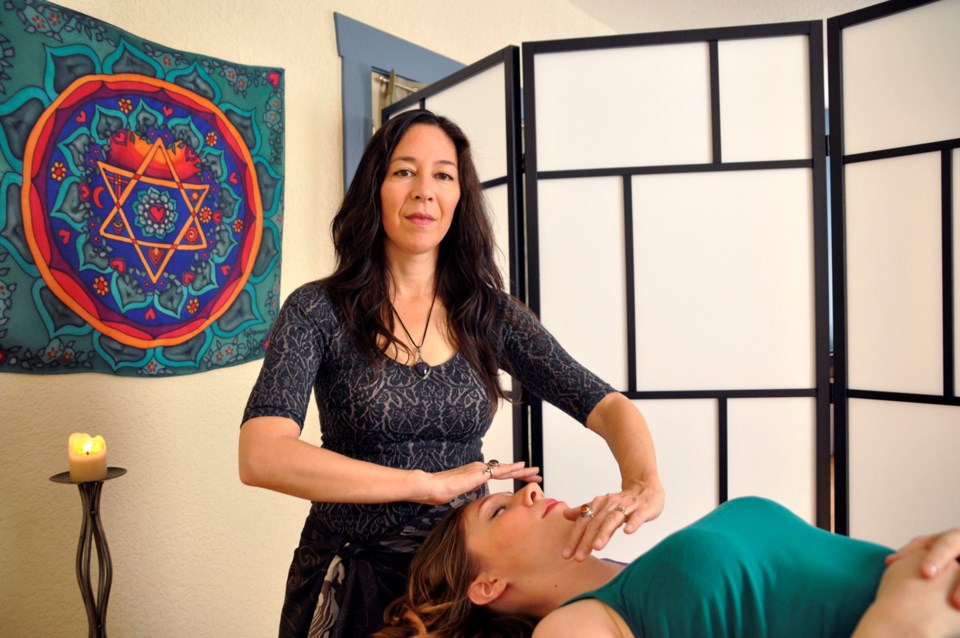 Karpoff, a United Church minister, is featured in a calendar that aims to challenge stereotypes of women in ministry. The Calendar Revs features United Church women clergy engaged in activities such as taking part in protest marches, sporting high heels, hunting and bellydancing.

“Some people have notions about what is proper for women in ministry to look like or what are proper activities,” Karpoff said in a press release. “We wanted to show the diversity of women in ministry. It’s potentially provocative, but it is also done with humour.”

Proceeds from sales of the Calendar Revs will support the Malala Fund, an international organization that aims to create a world where girls are empowered to reach their potential through quality education.

“I am shown practising healing pathway, which is a type of energy healing,” Karpoff said. “Many people have expressed surprise to me that a minister could practise energy healing.”

Karpoff said the idea of the calendar began with a conversation among a clergy group on Facebook after one woman had her photo taken for the clergy gallery in her church.

“The photographer told her to tilt her head differently because she looked ‘too Jennifer Aniston.’ We started sharing stories of being told we looked too young or shouldn’t do certain activities or should dress a certain way,” Karpoff said. “From that came the idea of creating a calendar to counter some of the stereotypes and criticisms we experience as women in ministry.”

Calendars are $20 (including shipping) and available at www.yearbox.com/calendarsforgood/the-calendar-revs-2015-calendar.

Enjoy a night out in Sapperton

Shopping, entertainment and community are all part of the fun of a November Night in Sapperton.

New West resident Deb Wardle is organizing a community evening of Christmas displays and sales by local crafters, home-based businesses, artisans and Sapperton merchants. Community members are invited to sip some cider with neighbours and friends, while shopping for Christmas crafts and listening to carol singing by the McBride Elementary Hi-Note Choir.

Admission is $2 or free for kids under 12. Partial proceeds will go to the food bank and the New Westminster Hyack Ambassador Program.

Handing out the hardware

New Westminster Minor Lacrosse Association handed out a whole lot of trophies at its 2014 awards night.

At its annual awards night, the association presented Tony Malcom with the John Witt Award for Coach of the Year. Mike Husband received the Lacrosse Citizen of the Year award.

Jason Bishop, coach of several field and box lacrosse teams in the city, said more than 600 New West kids play lacrosse – the highest per capita of any city in Canada.

Do you have an item for Around Town? Send ideas to Theresa, tmcmanus@royalcityrecord.com, or find her on Twitter, @TheresaMcManus.