Greens and Beans Deli is dishing out community spirit – with a helping hand from its customers. December is the only month of the year that staff at the Sapperton restaurant accepts tips.
Jan 15, 2015 3:36 PM By: Theresa Mcmanus 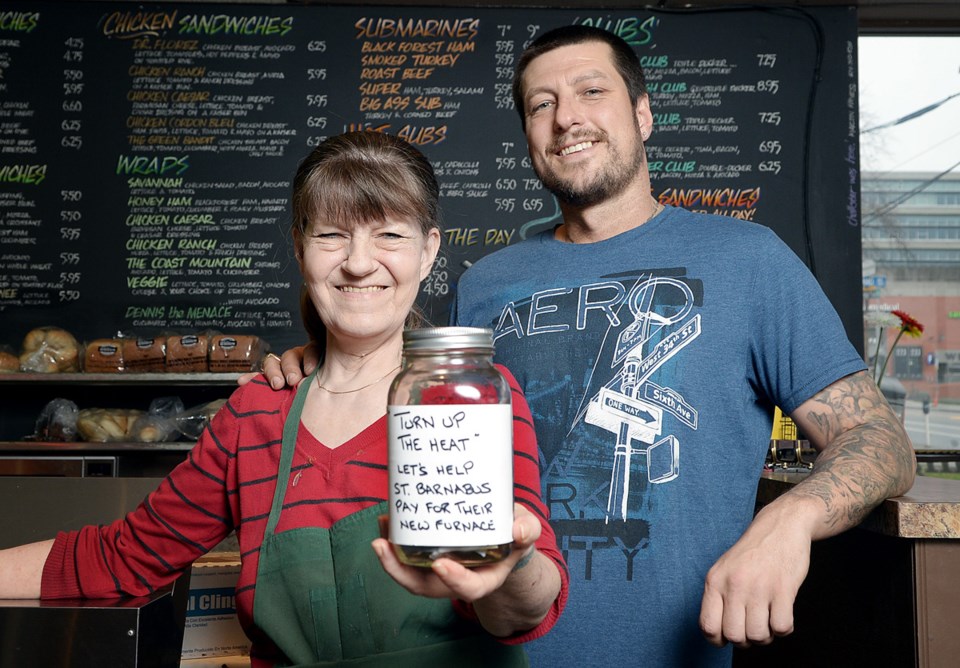 Giving hearts: Leona Green and her son Matt at Greens and Beans Deli. They are raising money to help St. Barnabas Church buy a new furnace – this month’s cause for the “tip jar.” For 11 months a year, the eatery uses its tip jar to accept donations for a variety of charities in the community.Jennifer Gauthier

Greens and Beans Deli is dishing out community spirit – with a helping hand from its customers.

December is the only month of the year that staff at the Sapperton restaurant accepts tips. For the other 11 months, the tip jar on the counter accepts donations to a variety of charities.

“In October and November, we were collecting to help Lookout buy a washing and dryer for the shelter,” said Leona Green, who co-owns the deli with her son Matt. “We managed to collect about $500.”

Each day, Green emails about 300 customers the special and soups of the day. In November, she asked customers if they knew where she could get the best deal on a washer and dryer.

“One of the customers knew a fellow at Phelps, a company that supplies coin-operated washers and dryers to apartment buildings,” she said. “Phelps donated a washer and dryer to Lookout and also said that they would do any future repairs for free for them forever. Wow, I couldn’t believe it.”

Lookout Emergency Aid Society runs several programs in New Westminster, including the Cliff Block Housing Centre, Rhoda Kaellis Residence and the Russell Residence and Shelter. Along with providing a range of transitional, permanent and supportive housing, Lookout also operates the city’s extreme weather shelter when the weather poses a threat to those out in the cold.

With Phelps getting on board to donate a new washer and dryer to Lookout, Green didn’t have to use the money collected for the new appliances.

Lookout Emergency Aid Society greatly appreciates the efforts of Leona Green and her team at Greens and Beans Deli.

“This donation allows staff to prepare clean blankets each night for our shelter guests,” she said in an email to The Record. “This is a huge advantage for our homemaking, outreach and shelter staff. Leona is part of the team!”

Verma said Green has been an amazing supporter of the New Westminster extreme weather shelter.

“She has provided hot, delicious soup for every night the shelter has opened with this being her third year. Leona does so much more than make the soup. She often delivers it to the site after her hard day’s work.  She has offered to train volunteers from the Cliff Block Residence to pitch in and help make the soup,” she said. “Leona has been a support of Lookout Emergency Aid Society for her trademark soups, for helping fill our residence library, brought donations of socks, T-shirts, winter clothes, blankets etc. for all three years.”

Verma said Green’s support, generosity and hard work has meant the city’s homeless population will have something hot and satisfying to eat when they come in from extreme weather systems and can sleep much better with full tummies.

“Leona has extended her hand in so many ways to those in need and supports the efforts of each individual in return,” Verma said. “There have been times that a person having overcome homelessness might even find a small part-time job under her compassionate eye. Leona Green is a hero to Lookout Emergency Aid Society.”

Through the years, Green has organized a variety of fundraisers to help organizations including the Salmonbellies, Royal City Humane Society and the community of Lac Megantic following a train disaster. Greens and Beans is currently collecting donations to help St. Barnabas Church pay for a new furnace and is selling toques as part of this year’s Toque Tuesday campaign, which raises money for programs addressing homelessness.