Local Rotary clubs band together to take on polio

While symptoms of the polio virus are not serious in most cases, it can be devastating for those unlucky enough to get paralytic polio.
May 4, 2018 3:58 PM By: Janaya Fuller-Evans 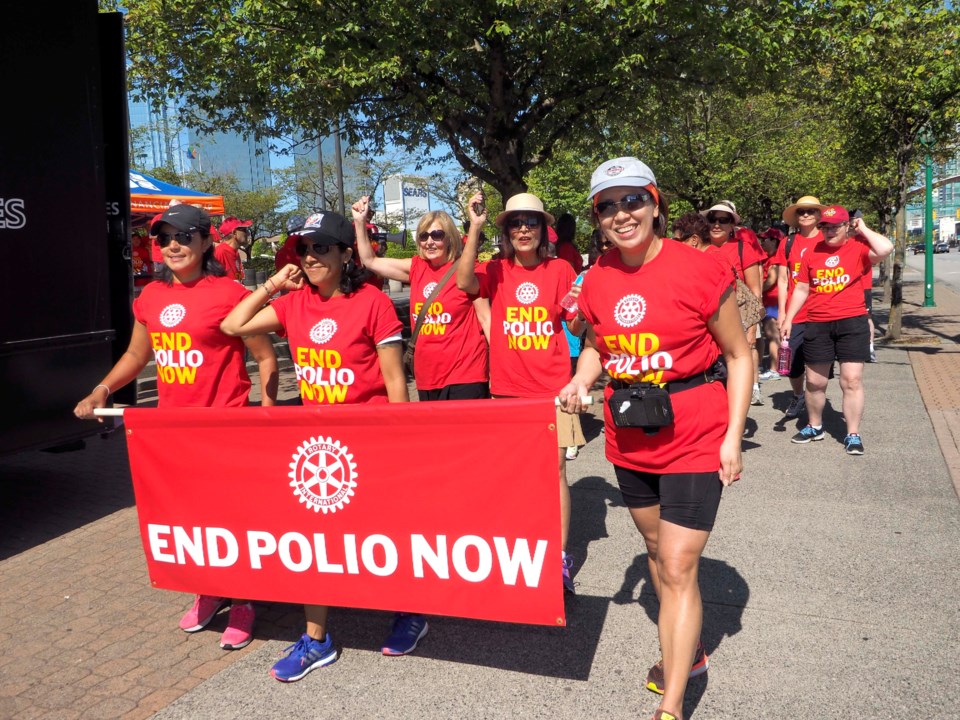 While symptoms of the polio virus are not serious in most cases, it can be devastating for those unlucky enough to get paralytic polio.

Those struck with the more severe form of disease can develop loss of reflexes, muscle aches and weakness, and loose or floppy limbs, according to the Mayo Clinic. Symptoms can progress and last for years.

The suffering polio can cause is something a member of the Rotary Club of New Westminster is familiar with, both personally and professionally.

“I had polio when I was three years old. Most of polio was eradicated but I managed to get it,” Gabor Gasztonyi told the NOW. “We had just come from Hungary as refugees, and I think there was a group of us who were not immunized.”

The last recorded cases of wild poliovirus in Canada was in 1977, but cases still pop up in parts of Asia and Africa.

There were about 400,000 cases of polio in the world when Rotary began fundraising and awareness efforts to fight the disease, according to Gasztonyi. Now there are about six or seven cases per year.

“The work has to be kept up because we require the immunization to continue, otherwise polio will come back,” he said.

Gasztonyi speaks to different Rotary Clubs about polio and his experience with it. He also travels to Ethiopia to help children there who have the disease.

“The project I’m involved in is giving physiotherapy services to young children with polio in Ethiopia,” he explained.

Gasztonyi is also chair of this year’s End Polio Now Walk, taking place on May 27 in New Westminster.

Other Rotary clubs have come on board to help with the walk – the Rotary, Roteract and Interact Clubs of Burnaby, New Westminster, Vancouver Cambie and Vancouver Mountainview.

“It started about five years ago, among, essentially, the Burnaby clubs and New Westminster,” Gasztonyi said. “And we slowly expanded to include other clubs.”

Adding more clubs along the way has made for a larger event with better capacity for fundraising, he said.

“We kind of feel that the more people involved, the better off we will be in achieving what we want to achieve,” he added. “It’s nice to be able to raise some funds and it’s also good for awareness.”

The participants will be wearing red Rotary T-shirts.

“It brings great attention to Rotary in the community,” he said.

The walk begins and ends River Market at New Westminster Quay, with participants walking 2K or 5K along the waterfront esplanade Bboardwalk.

The River Market is supplying microphones and tables, and there will be a live band playing. New Westminster Mayor Jonathan Cote will be on hand, along with dignitaries from Burnaby and the Rotary district governor Don Evans.

“They have a great time. We’ve had great weather every year,” Gasztonyi said. “It’s really a fun day, it’s a great venue.”

“We’re making huge progress in the world, and Rotary’s done an incredible job, so we want to keep it up and essentially raise as much money as we can,” Gasztonyi said.

To register or sponsor walkers, go to www.bit.ly/endpolionow2018.