'I do it for closure' 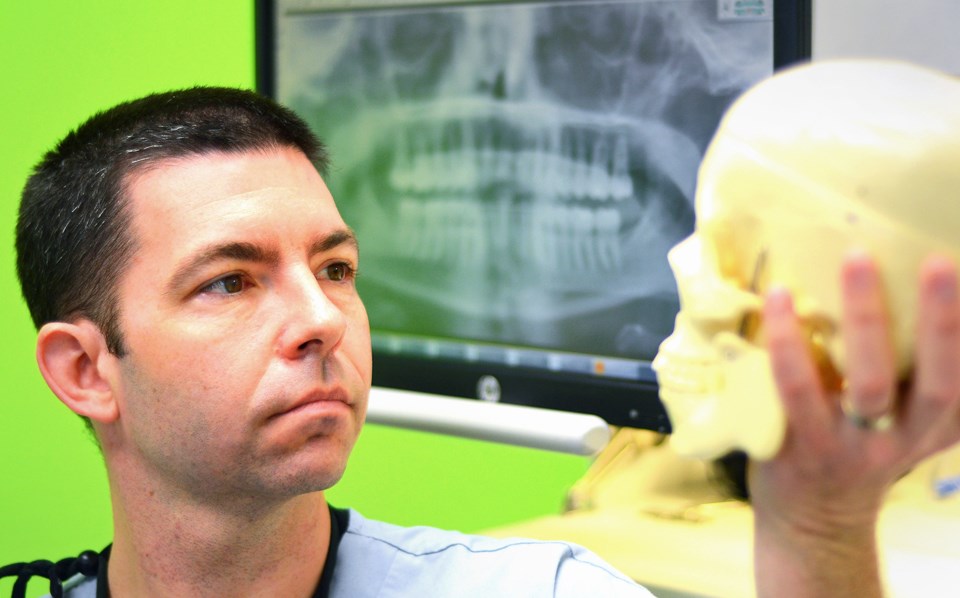 After seven years volunteering with the Coroners Service of B.C., New Westminster dentist Dr. Darcy Murphy has seen some things – but there is still a moment during every call that gives him pause.

“When you open the zipper of the body bag, that’s when you’re kind of bracing yourself,” he says.

Most often, that moment comes at night, in the morgue of either Vancouver General or Royal Columbian Hospital.

Earlier in the day, a voicemail might have been left on his phone while he was busy with his day job, drilling and filling teeth at his New West clinic, Queens Park Dental.

A “form b,” faxed or emailed, will have outlined some of the details – body found in wooded area by such-and-such a trail, police involved.

“They have a tough job,” says Laurel Clegg, manager of the coroners service’s identification and disaster response unit. “We’re not calling them when the case is easy. We’re always calling them when it’s tough – tough emotionally or it’s a tough case to solve. It’s burnt or it’s been in water.”

Murphy is one of three Lower Mainland dentists who take turns on call with the Bureau of Legal Dentistry (BOLD), a pioneering forensic ondontology lab at UBC, called in by the coroners service to identify human remains.

Murphy’s connection with the lab – the first and only one in North America dedicated to full-time forensic dentistry research, casework and graduate teaching – dates back to before the Prince Edward Island native even entered dentistry or left the Maritimes.

Interested in forensics, he connected with BOLD founder Dr. David Sweet during a trip to Vancouver in the late 1990s.

He stayed connected and joined the team after setting up shop in B.C. in 2004.

His work and that of his other BOLD counterparts is unpaid, with the fees charged for service donated back to the lab to fund research in forensic odontology.

“That’s our first stop when it comes to tricky identifications,” Clegg says. “Dental is always the best route.”

It’s less costly than DNA, she says, and quicker – a crucial component as police wait to get on with their investigation and families agonize over the possible outcome.

“They understand that that final notification to the family, they’re the one person in between that process,” Clegg says of the forensic dentists.

On the days he gets a call, Murphy might have just enough time at home for dinner and to tuck his kids into bed before heading back out to the morgue.

There, he and an assistant wheel out the body, unzip the body bag and start with a physical examination, taking photos of every step.

If the death was suspicious, they might be joined by a police officer keeping watch.

“We’ll do a full exam as if the person was alive, where any fillings are, where crowns are, where dentures are,” Murphy says. “Sometimes people have missing teeth, and sometimes the teeth could have fallen out and are in the body bag, or they could have been taken out five years ago, so we have to discover that. You have to look for everything.”

But even the first step can be a challenge, depending on the condition of the body.

“Somebody that’s heavily decomposed, the odour coming from that, you’ve got to deal with that, and you’re dealing with maggots too,” Murphy says.

“Everything is burnt,” Murphy says. “They’re jaws are almost burnt shut, so we have to dissect a little bit with permission from the coroners office to actually get those X-rays in there.”

Whether bodies have four teeth or 28, each gets a full set of dental X-rays to compare with X-rays taken while a suspected match was alive.

The more X-rays there are for comparison, the easier the identification.

“There’s an ante-mortem page and a post-mortem page,” Darcy says of the process, “and we do all these short notes of what’s there. The 1-6 is the upper right molar, so if there’s a large filling in that one that matches the other one, then that’s a good chance that it might be the same person.”

By the end of the process, he determines whether the body is a positive, negative or possible match with the person it’s suspected to be.

Even if there is strong circumstantial evidence to suggest a match – like identification or items of clothing found with the body – the coroner can leave nothing to chance.

Out of 8,000 cases of unnatural, sudden and unexpected, unexplained and unattended deaths the service has dealt with over the last year, BOLD has been called in 25 times to confirm the identity of the bodies.

“When you’re doing something that serious, you’re declaring someone dead under the Coroner Act, it’s a big deal,” Clegg says. “It’s a serious serious document, and you want to make sure you’re doing it right.”

By the time Murphy leaves the morgue after a call, his wife and kids will often already be asleep.

At home, it takes time to quieten the images of the bodies, sometimes of children, he has seen.

“You come home, and it’s 12 o’clock at night and you have a lot of visuals in your head and you can’t go to sleep,” he says, “so I stay up and maybe watch 15 minutes of TV to get my mind off it or pick up a book or whatever because I can’t just go to sleep.”

What keeps him going back to the morgue, he says, are the families of the people he sees there.

“I’m a dad,” he says. “I just couldn’t imagine not knowing where my daughter was. Just not knowing for years would be so hard. If she passed, then at least I’d know. I could put closure there. I do it for closure.”