Question: I have several boxwood, which I hope one day will grow together and make a small hedge. Most of them have some part of the bush now turning orange in colour. It started last year and is getting worse.
Sep 18, 2014 1:38 PM By: Anne Marrison 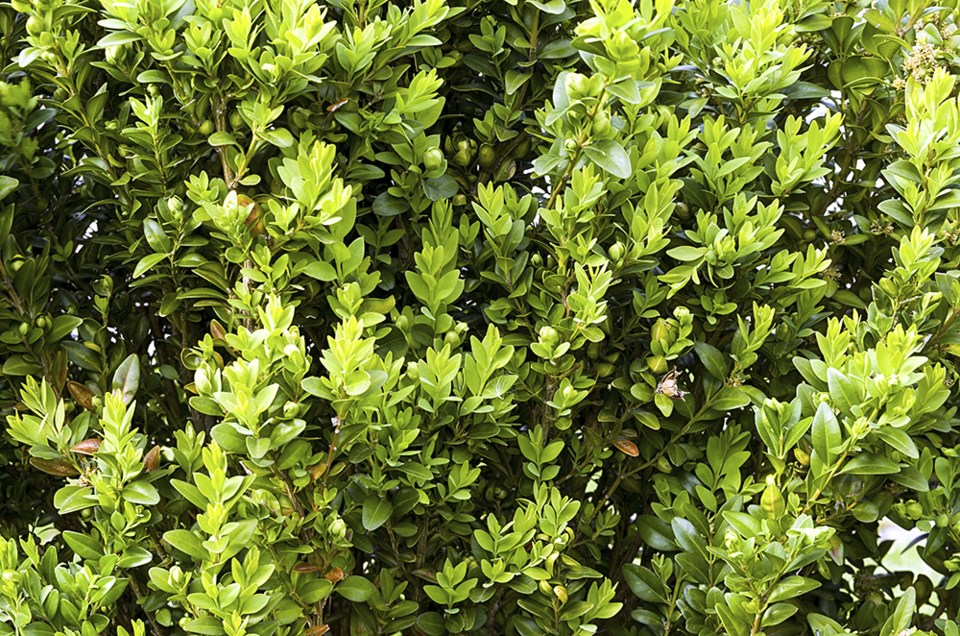 Fungal disease: Once boxwood is infected with blight, it’s almost impossible to eradicate the fungus. Consider using other types of shrubs that may be more resistant to fungal infections.Thinkstock

Question:
I have several boxwood, which I hope one day will grow together and make a small hedge. Most of them have some part of the bush now turning orange in colour. It started last year and is getting worse. I can’t see any bugs or webs on the bush. What is wrong?
Pat Pryce,
Maple Ridge
Answer:
Orange leaves are a symptom of the fungal disease boxwood blight. This started in England, moved to the States and is now in B.C. Sad to say, it’s considered incurable. The orange leaves will die and gradually fall off while more leaves turn orange. Box blight can spread around neighbourhoods by wind and rain (like other fungal diseases).
Fungicides can prevent it, but they can also mask it so a bush may be infected but it seems OK. To be successful with fungicides, you have to cover all the bush, including the stems and undersides of leaves. Unfortunately box is so dense, this is almost impossible to do.
There are other shrubs that might make a good replacement hedge. These include Japanese holly (Ilex crenata). This is an evergreen shrub that produces masses of white flowers followed by black berries. It is very hardy.
Dwarf rhododendrons make a lovely hedge. The Yakushimanums usually have pink buds and pink or white flowers.
Cryptomeria japonica (Globosa nana) is a dwarf, very rounded evergreen. Dwarf salal is another possibility. You might want to wait to see how fast the blight moves. But it has the reputation of being hard to deal with. Sarcocca can also catch it. So can some other boxes like Buxus microphylla. It can lay dormant in fallen leaves of box for five years.

Question:
My neighbour had a new lawn put in and there are mushrooms growing near the property line. How can I prevent the mushrooms from spreading onto my side of the yard? There is no fence there.
Soo Chan,
Vancouver
Answer:
To be absolutely certain, you could install an edging all the way along the property line. It should be deeper down in your soil than the depth of your neighbours new soil. A garden centre would be able to sell you suitable edging.

Question:
Can I stop fertilizing my petunias and geraniums now? They are in containers. I used the Shake and Feed just once when they were planted in May, and they looked gorgeous. Does it just need to be used once a season as it’s quite expensive?
Terry Wong,
Burnaby
Answer:
Shake and Feed fertilizer lasts about four months. so you won’t need any till the end of September. But, by then nights are colder and annuals are getting older, tireder and ready to be composted. The best thing you can do is hold off applying it again. Shake and Feed is intended to last a whole season.

Opinion: This is how even young people are destroying their hearing
May 9, 2021 8:38 AM
Comments