Fridays on Front returns to New West. It's time to party 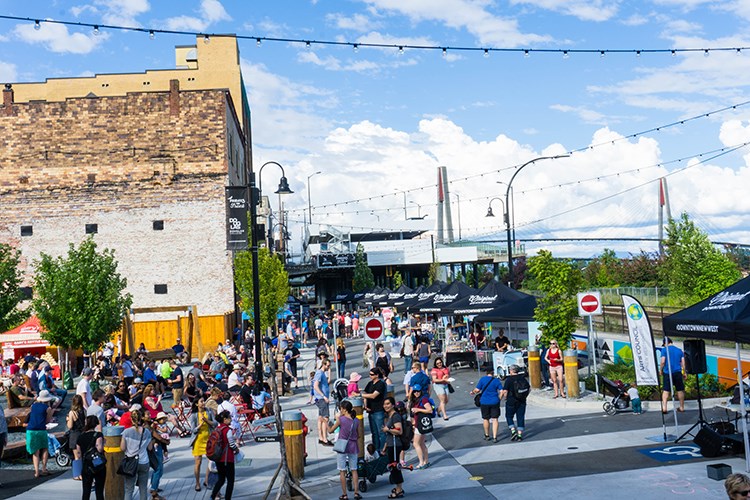 Fridays on Front returns to New West this summer, with some new theme nights in the works for this year's event - including a vinyl market and a sing-along.Contributed

The countdown is on until one of the most popular events of the summer returns to downtown New Westminster.

Fridays on Front is taking place in the 600 block of Front Street every Friday from July 5 to Aug. 23 from 5 to 9 p.m. The Downtown New West BIA and Douglas College are presenting the weekly “family- and pedestrian-friendly street social” on the Front Street Mews, which features food trucks, live music curated by the Arts Council of New Westminster, and a market of artisan vendors from New West Craft.

“Thanks to Steel & Oak Brewing Co and Pacific Breeze Urban Winery, you can also grab your favourite beer or glass of wine and mingle on the fully-licensed Front Street mews with its relaxed historic vibe,” said a press release. “Also featuring a weekly rotation of guest breweries. Look out for: Another Beer Company, Luppolo, Parallel 49, Boombox, Powell, Strange Fellows and Trading Post.”

Kendra Johnston, executive director of the BIA, said the New West community has truly embraced this concept and the event keeps growing year after year.

“Starting July 5, we’ll be producing eight consecutive street socials and we invite you to come mingle on the mews with your favourite local businesses, breweries, artisan vendors, musicians and food trucks of course,” she said. “New this year, we’ve added a few more theme nights.”

In addition to the New West Pride night on Aug. 16, this year’s lineup includes Analog Night on July 26, which will feature Social Medium DJs and a vinyl market. At the Aug. 2 sing-along night, Quayside Voices will be leading the crowd through a community sing-along.

The Downtown New Westminster BIA launched Fridays on Front in the summer of 2017 to create a family-friendly event at the new Front Street Mews and to entice folks to check out some of the businesses on Front Street, including Antique Alley Movie Props, The Wine Factory, Old Crow Coffee Co., Westley's Military Surplus, Hive City, Army & Navy, Columbia Integrated Health and Sugarrays Boxing.

“Every week, Fridays on Front will be a little unique with different live performances, vendors and food trucks so be sure to visit often so you don’t miss out!” said a press release.

607
New West sees big jump in COVID-19 cases
605
Opinion: Now NIMBYs are whining about shadows from new housing
431
Here is how fast COVID-19 can spread after a road trip in B.C. (INFOGRAPHICS)
407
Filming in New West: A bright spot in a challenging year
397
Pfizer temporarily reduces European deliveries of vaccine