Gardeners who grow chives, leeks and other kitchen onions don't always think about their exotic flowering relatives - alliums, the onions that are grown for their beautiful flower heads which in different varieties may be purple, pink, white, lavende
Oct 14, 2014 8:46 AM By: Anne Marrison 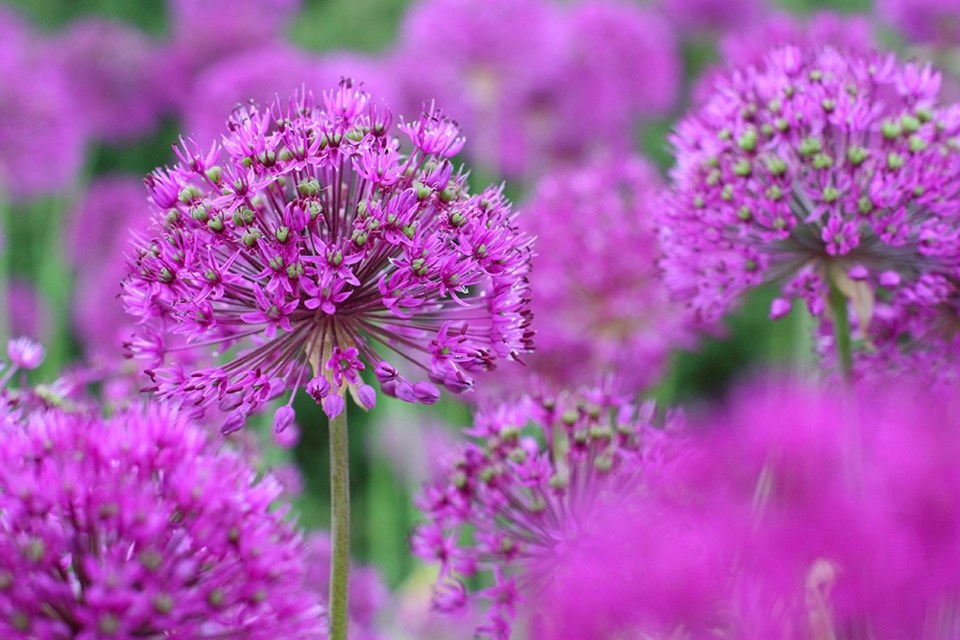 Flowering onions can add a pop of colour to your garden.Thinkstock

Gardeners who grow chives, leeks and other kitchen onions don't always think about their exotic flowering relatives - alliums, the onions that are grown for their beautiful flower heads which in different varieties may be purple, pink, white, lavender and sometimes yellow or blue.

After their flowering season, the easy-to-dry seedheads can be cut for winter vases or left in the garden where they add interest until winter winds make them keel over. Flower heads if cut early tend to keep a faded version of their original colours.

Besides being hardy and unusually healthy, alliums have a vertical growth habit that fits very well into containers and small space. They reliably come back year after year.

Though alliums will grow in most soils that aren't swampy, their favourite conditions are the same ones that crocuses and tulips like - sun and well-drained soil. The foliage dies down immediately they flower (or even a little before in some). Once they're dormant, drought doesn't bother them.

Most of their bulbs can be planted below or within the roots of other plants, and when flowering the taller alliums rise well above compact annuals. Squirrels seem to ignore alliums as do other pests.

Breeders are working on creating the deepest possible purple alliums such as the 1.2 metre Ambassador. But most of the tall, large-globed ones – including Globemaster, Lucille Ball or Allium giganteum – are a blend of pinkish purple or purplish pink.

Virtually all alliums are keepers which return year after year without hogging precious space. But the Sicilian Honey Garlic (Nectaroscordum siculum) gradually makes a thick and ever-increasing mat of bulbs. The flowers produce 90 centimetre stems of bells in an unusual blend of white, pink purple and green.

One of the most beautiful is Allium christophii which is only 30 cms tall but has heads which can reach 25 cms in diameter. It's another lovely one for drying. Each starry floret is centered with a black seed.

One new and unusual species is Allium obliquum, which originates in Siberia and is reputed to be evergreen.  Few alliums have yellow flowers, but this one does. It grows 100 cms tall and is said to be hardy to zone 2.

Another pretty allium is Chameleon which begins flowering rosy-pink, then morphs into white petals with a purple stripe as it matures. Also unusual is Allium atropurpureum, which flowers a deep purplish-red.

It isn't generally known that leeks, shallots and vegetable onions can produce very pretty flowers, though with leeks and onions this doesn't happen till their second year - and by then the root isn't much use for eating.

Most flowers of vegetable alliums are white, but red onions or purple-tinged leeks may produce flowers with a purple blush or purple stamens or purple seeds. Once you have a flower, you may obtain viable seeds for garden planting.

Obtaining seeds is best tried with one or two plants that you've moved out of the vegetable garden. Old roots are susceptible to diseases and pests.

Anne Marrison is happy to answer garden questions. Send them to her via amarrison@shaw.ca  It helps me if you add the name of your city or region.