Digging into the history of New Westminster’s plants

The New Westminster Museum has unearthed some interesting finds for its latest exhibition.
Jul 7, 2016 10:52 AM By: Theresa Mcmanus 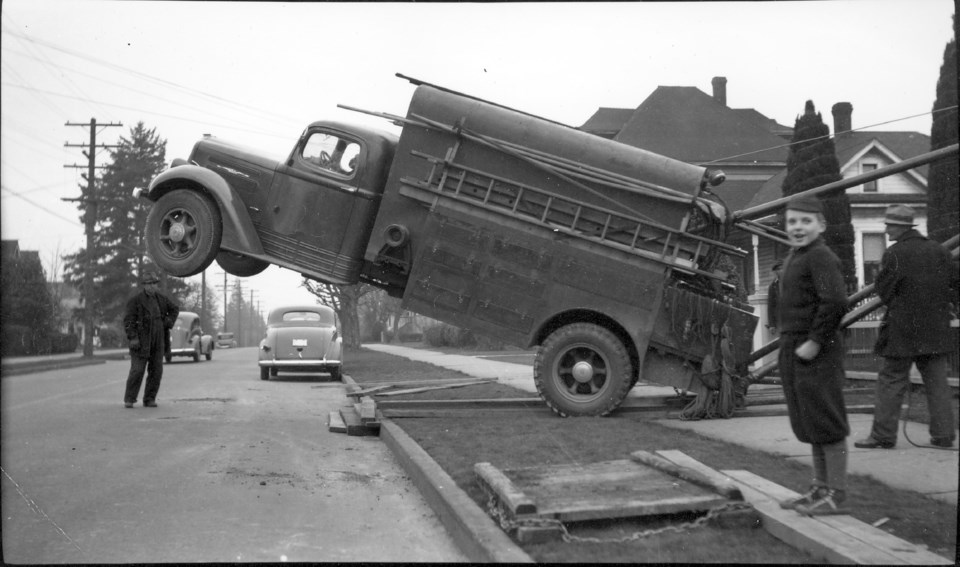 Whoops: Around 1940, staff in the city’s Electric Light Department tried to move some monkey puzzle trees, which resulted in the truck being lifted off the ground. This is just one of the stories unearthed as part of the new Branching Out: The Plants of New Westminster exhibition at the New Westminster Museum.Contributed

The New Westminster Museum has unearthed some interesting finds for its latest exhibition.

Did you know that monkey puzzle tree seeds are edible? Or that pheasants used to run around in New Westminster’s wild areas because 19th century hunters set them loose? Or that you can recognize Douglas fir pinecones by scales that look like mice trying to hide inside? These are some of the facts you’ll find at Branching Out: The Plants of New Westminster, a new exhibition at the New Westminster Museum in Anvil Centre.

“Some of the stories about plants are quite funny,” said curator Oana Capota. “Around 1940, for example, the city’s Electric Light Department truck tried to move some monkey puzzle trees. The truck ended up being lifted off the ground as they tried to lift the trees.”

The exhibition, which runs until Nov. 13, tells stories about some of the city’s most famous plants and the people who grew or ate them.

Museum staff spent about a year researching plants in the area and discovered some interesting facts, such as learning that New West once had one of the largest seed plants in North America, sending out Sitka spruce, Douglas fir and western hemlock seeds around the world. B.C. Hemlock was processed into wood at a local mill and used to make high-quality violins.

“Museum staff also uncovered some rarely seen artefacts. One is a box of dehydrated peas from the 1940s. In 1946, a family packed up their entire kitchen for a move and rediscovered the contents only decades later. They donated everything to the museum, as a time capsule of 1940s food,” said a press release about the exhibition. “And two of the Lower Mainland’s remaining pheasants turned up in the museum’s collection as taxidermy trophies.”

The New Westminster Museum is open daily from 10 a.m. to 5 p.m., except Thursdays when it stays open till 8 p.m. It’s located in Anvil Centre at 777 Columbia St.