Royal City residents are invited to have a blast this Victoria Day at the annual anvil salute.
May 18, 2016 4:09 PM By: Theresa Mcmanus 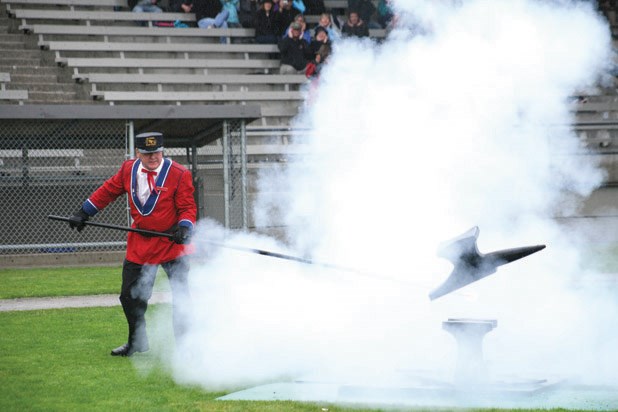 Cover your ears: The Hyack Anvil Battery will continue its longstanding tradition of holding a "21 gun" salute on Victoria Day.

Royal City residents are invited to have a blast this Victoria Day at the annual anvil salute.

Local historian Archie Miller, a member of the Ancient and Honourable Hyack Anvil Battery, notes New Westminster has recognized Victoria Day since May 1859, which was the first time the community formally honoured their sovereign, Queen Victoria.

A newspaper report from that time stated it “was a day of general rejoicing and festivity” in the city, which was the province’s capital.

More than 150 years later, New Westminster will mark Victoria Day with music by the Band of the Royal Westminster Regiment, a few short speeches, and a “21 shots” salute to the memory of Queen Victoria and to Queen Elizabeth II. Using anvils and gunpowder, the Ancient and Honourable Hyack Anvil Battery will carry on a tradition it’s done since the late 1800s.

The action gets underway in Queen’s Park Stadium at about 11:30 a.m. with music and short speeches, followed by a 21-shot anvil salute beginning at noon.

Never been to the anvil salute before? Not to worry – the battery’s master of ceremonies will describe what’s happening and provide a story or two and historical anecdotes.

A press release from the anvil battery notes this traditional New Westminster event has occurred in a number of locations through the decades, including city hall.

While the salute is a Victoria Day tradition, it’s also taken place for special events, such as the Olympic torch run in 2010, the opening of Anvil Centre in 2014 and in recognition of Queen Elizabeth’s record as the longest serving monarch in 2015.