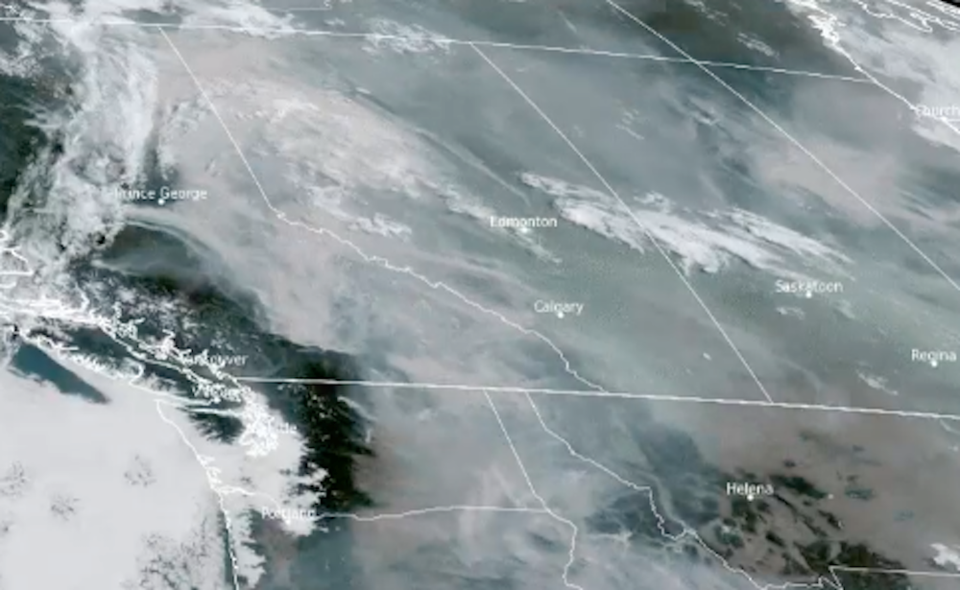 NOAA has released videos of wildfire smoke blanketing areas of Canada and the United States in July 2021. In BC, 23 regions have air quality warnings.Photo via @NOAASatellitePA / Twitter

The National Oceanic and Atmospheric Administration (NOAA) has released videos and images of wildfire smoke blanketing large areas of Canada and the United States.

The NOAA satellites monitor the fires, their smoke output, and air quality effects from the smoke. The fires are injecting smoke 40,000 feet into the atmosphere and compromising air quality, explains the agency.

During wildfires, first responders and air traffic controllers rely on NOAA's HRRR-Smoke model forecast for visibility. Fire crews will consult it when deciding where to pitch base camps or to stage resources. "And after a fire passes through, EPA crew workers use it to determine whether the smoke has lifted enough to travel to burned areas to clean up hazardous waste," states NOAA.

HRRR-smoke runs "around the clock" and produces new weather and smoke forecasts every hour; it also forecasts up to 48 hours into the future.

With close to 300 wildfires burning across B.C., smoke has been billowing north and east, blanketing 23 regions of the province in air quality warnings from the southern Interior to the Peace River.

Have a look at a couple of videos of the smoke moving across the continent.

Have a look at a timelapse video that shows the stark contrast between the clouds and the wildfire smoke.

At the time of this writing, Metro Vancouver does not have an air quality advisory issued for the region. However, Fraser Health warns residents to prepare for a change in air quality.

Meteorologists say a change in wind, though not on the immediate horizon, could quickly envelop the Lower Mainland and Fraser Valley in thick smoke.

On the low end, smoke can trigger lung and eye irritation, a runny nose, headache or a sore throat and mild cough. Experts recommend seeking medical treatment immediately if those symptoms escalate to shortness of breath, a severe cough, dizziness, chest discomfort, heat palpitations or wheezing.

Fraser Health recommends the following to keep yourself safe from smoky air:

With files from Stefan Labbé.