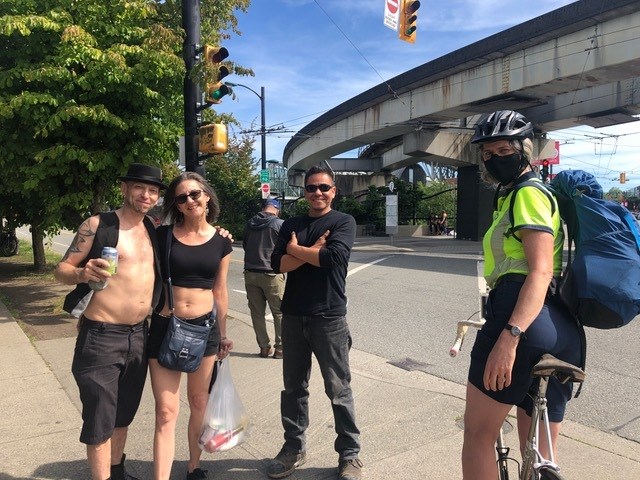 When Courtenay Cullen took off after a man who stole her wallet one afternoon on Commerical Drive, this group of strangers looked after the bags she left behind.Courtenay Cullen

A B.C. woman whose wallet was returned by a group of quick-footed Vancouverites says that even during a global pandemic the city’s community spirit is alive and well.

Courtenay Cullen was standing on Commercial Drive the afternoon of Monday, May 31 after having bought a housewarming gift for a friend. She had also bought a coffee from a local cafe and as she was organizing her purchases she felt a tug at her unzipped purse.

Cullen turned to see an older man in dark clothing reaching inside the purse and as she realized what was happening he grabbed the wallet inside.

“Then everything happened very quickly,” Cullen wrote in an email to Vancouver Is Awesome. “‘Hey!’ I said rather disbelievingly, and like a shot, he took off and ran up the street.”

Cullen yelled after him again and shouted to passersby the man running away had just made off with her wallet. She then made the decision to drop the bags she was carrying and took off after him.

Hindered by her Birkenstock-style sandals she was losing ground to the thief but she kept running and shouting. As her strength was starting to wane and the thief kept gaining ground others picked up the torch.

“People started to chase him! And not just one person - lots of people!” Cullen writes. “At least two people on bikes, people on foot, and one man even came out of his house to help.”

Working together, the group cornered the man at the end of the next block and they got the wallet back. In getting the wallet back they let the thief go, a decision Cullen says she was okay with as she wanted her wallet returned more than anything.

'I was shaking and smiling'

As the wallet was returned and all its contents were accounted for she started thanking the group profusely.

“I was shaking and smiling, overwhelmed by what had just happened - and especially by the kindness and quick action of these strangers,” she said.

At around this time, Cullen realized she had left her bags on the corner two streets back. She says that even as she ran back to her belongings people asked her if she was okay -- including a local security guard. She assured them all she was fine and as she rounded the corner she found a small crowd of four or five people guarding her bags.

“I was overwhelmed for the second time,” Cullen said. “By the kindness, the community spirit, the incredible humanity of all these people.”

As she had to get going if she was to meet the friend the housewarming gift was for Cullen had to get going. Although, Cullen did manage to snap a photo of the people who had stood watching over her bags as the chase ensued.

Before the wallet ordeal, Cullen had been wondering how, after the hardships induced by the coronavirus (COVID-19) pandemic, we as a society could come together again. She wondered if things would ever be the same -- if we as a society have become a group of individuals after being forced to isolate ourselves from one another.

“I’m here to tell anyone who will listen, that, not only is our community spirit alive and well in Vancouver -- it might be stronger than ever,” she said. “I have always believed in the power of community, and of the human spirit. That we are basically good, and that we want to help each other. But I have never had such tangible evidence before.”

Cullen extended her thanks to every person who stopped, helped, shouted support, ran and everyone else who cared what was happening to her that day.