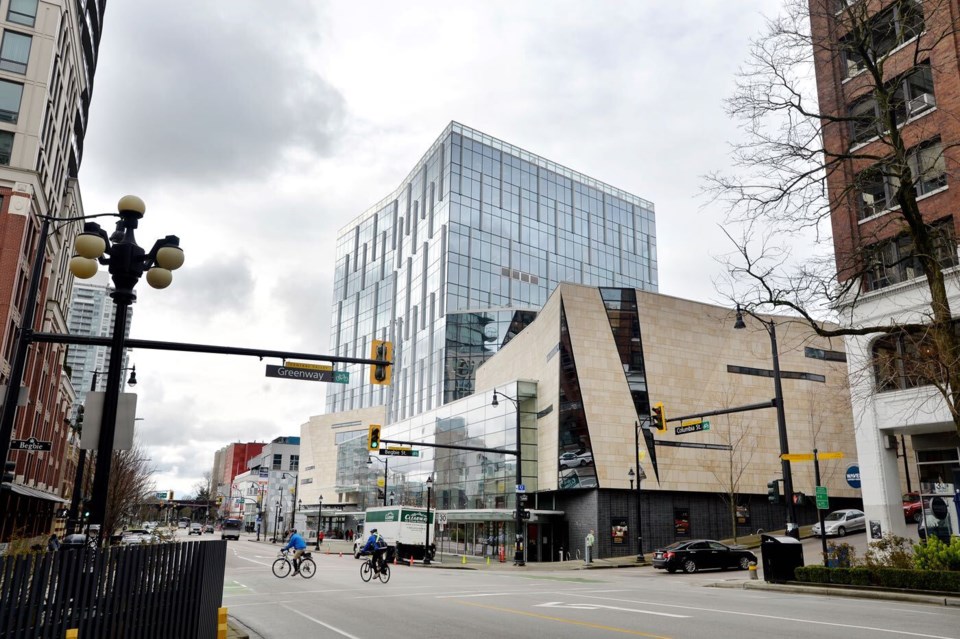 Anvil Centre is optimistic about making a strong comeback after the coronavirus pandemic.

Now serving as a COVID vaccination site until Nov. 30, Anvil Centre was among the civic facilities impacted by pandemic restrictions introduced last March.

“We cancelled millions of dollars in business,” said Heidi Hughes, director of sales and marketing. “We were chock-a-block full all the way through to Christmas and even beyond.”

Weddings, conferences, annual general meetings, banquets, galas, trade shows and conferences were among the bookings that had to be cancelled at the facility, which originally had only a handful of unscheduled days between September and December 2020.

In the early days of the pandemic, the ballroom at Anvil Centre served as the City of New Westminster’s emergency operations centre – the hub from which the city ran its pandemic response. With cultural and conference facilities closed, Anvil staff took on roles needed as part of the city’s pandemic response – all the while contemplating how to help the facility recover from the pandemic.

“When I was working for the Hyatt back when 9-11 hit, it was the same kind of thing,” Hughes noted. “It was a much shorter timeframe where people were affected, but it was the same thing – we have to rebuild confidence in what we are doing. With 9-11 it was about: how do we rebuild confidence with border security, airline travel? But now it’s: how do we even overcome being in the same room with people we don’t know? How do we remove that fear?”

The Pacific Dental Conference, held at the Vancouver Convention Centre from March 5 to 7, 2020, made headlines in the early days of the pandemic, when more than 80 conference attendees tested positive for coronavirus. At least one death was associated with that event.

“In the very beginning, events were sort of the Ground Zero of COVID with the dental conference. That’s kind of why we were the last ones to kind of get any traction for any support from government,” Hughes said. “We were just seen as events are bad; people being together – bad.”

As the pandemic endured, the events industry recognized it was going to have to prove to government that events could be hosted safely. That included looking at best practices being developed in other parts of the world where trade shows and events were resuming.

“It was also, of course, how do we make people feel safe again in an event environment?” Hughes said.

To make the building safe and to make visitors feel safe, Anvil Centre has had to consider safety from every possible angle – not only the number of people coming into the building, but the type of activity taking place and their specific needs, such as food and beverage services or audio-visual services.

Creating new policies and procedures, installing signage and Plexiglas and reducing on-site staff are some of the initiatives undertaken in response to COVID-19. Moving forward, the health and safety of staff and visitors is something that will need to be considered for every event planned at Anvil Centre.

“Are people allowed to dance? These are all things that need to be part of every event plan now,” Hughes said. “And we need to follow the PHO (provincial health officer) very, very carefully.”

And safety also means more cleaning – lots and lots of cleaning in facilities where it was normally done away out of the public’s eye.

“Before, with housekeeping at hotels, you’d be sitting in a lobby – housekeeping would never come through while you were sitting there and start wiping the table in front of you and around you, the lamp and everything.  Now, people want to see that everything is being sanitized all the time,” Hughes said. “You want to sit in the Four Seasons lobby or the lobby of Anvil Centre and see a cleaning person come past and wipe all the high-touch surfaces.”

Anvil Centre, an 84,000-square-foot facility on Columbia Street, opened its doors in September 2014.  In addition to space for conventions, it’s also home to the New Westminster Museum, the Canadian Lacrosse Hall of Fame, the New Media Gallery and spaces for cultural programs.

Initially shuttered by COVID restrictions, some spaces in Anvil Centre, including the New Westminster Museum and the New Media Gallery, reopened to the public last fall – but in a different way.

“Everything is by appointment,” Hughes said. “You have to book a time, and you have be only with people from your bubble.”

With live conferences and big events on hold for the time being, Anvil Centre’s ballroom has had the space needed to be a venue for “essential” events such as blood donor clinics with Canadian Blood Services, provincial court, voting for the provincial election and a child immunization clinic with Fraser Health. Other events at Anvil Centre have included virtual annual general meetings for corporations, unions and other societies or associations that by law are required to host their meetings.

At a time when regularly scheduled events were cancelled because of the pandemic, the film industry has been a boon to the facility’s revenues. Batwoman, Sight and The J Team are among the recent productions contributing to the 25-plus filming days at Anvil Centre since the pandemic hit.

While events are off-limits, film productions are considered business sites and are permitted to operate.

Filming has taken place at Anvil Centre in the past, but it’s been “very difficult” to squeeze them in during non-COVID times because of other bookings, Hughes said.

“In a year where there is not a lot of revenue coming from actual events and conferences, we have been able to fill a bit of the gap with the filming revenues,” she said.

With the April 7 opening of Fraser Health’s vaccination clinic at Anvil Centre, filming has run its course at the facility for the time being. Some areas of the building will continue to be open to the public for scheduled visits, such as the New Westminster Museum and the New Media Gallery, but the ballroom is reserved for the vaccination clinics.

“No more filming. Not until after that,” Hughes said. “But once we get back to our normal operations, we don’t generally have a lot of space for filming anyways because they generally need big chunks of time.”

Anvil Centre is looking forward to the day when in-person events are allowed, but it’s also taken steps to allow virtual programming, including cultural events and conferences. It now has the virtual technology in place required to stream conferences and meetings.

“I think, for a while, virtual and hybrid events are going to be a thing. Hybrid meaning part live, part virtual,” Hughes said. “Some groups will still do everything virtually, where they just bring their speakers and their core event staff in.”

On April 8, Anvil Centre, in partnership with the BC chapter of Meeting Professionals International (MPI), hosted a virtual event in the theatre for Global Meetings Industry Day, a global initiative that celebrates the value of the meetings and events industry.

While COVID-19 numbers in British Columbia continue to soar, Hughes is confident the event industry will rebound.

“Very optimistic,” said Hughes, the current past-president of the BC chapter of MPI. “There is going to be a ton of pent-up demand. Humans want the contact.”

Hughes anticipates there will always be virtual components to big conferences in the future, but live events will resume when it’s safe to do so.

Hughes said “the writing is kind of on the wall that 2021 is a write-off” as far as large events and weddings, but couples are hopeful there will be fewer restrictions in place next year, and Anvil Centre has already booked weddings for 2022.

Hughes, who has worked in the tourism and hospitality industry for more than 25 years, said flexibility will be key to planning events in the future. She said the meetings and event industry is resilient and creative, and knows how to think outside the box and work together as an industry.

Hughes feels facilities like Anvil Centre, which focus on regional and local corporate markets, are poised to rebound quicker than major convention centres.

“I think bigger convention centres that are dealing with international markets, it’s going to be 2023, 2024 before there is travel confidence and a lot of bigger conventions going international again,” she said. “But for us, we are a regional venue. A lot of our groups don’t stay overnight in hotels or travel via airline to come to us. So the regional market will rebound really fast.”

The Roaring 20s, known as being a decade of economic growth and prosperity, followed the 1918 influenza pandemic that’s estimated to have killed more than 50 million people worldwide and the 1916 polio outbreak in New York City.

“There’s a lot of demand left in 2021 to really get people together and be happy again and celebrate,” Hughes said. “There’s going to be a lot to celebrate when this is over.”