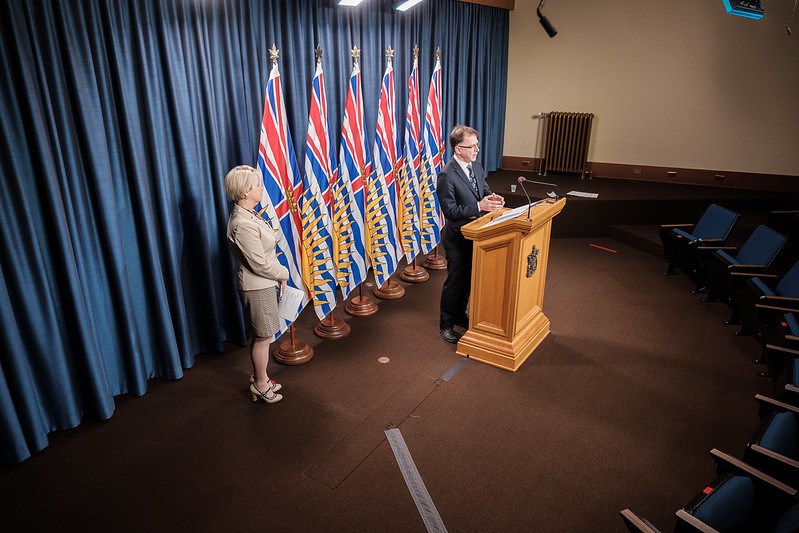 Provincial health officer Bonnie Henry on May 3 provided data for the past three days, which also included 835 cases on May 1. The new cases raise the province's total number of cases of COVID-19 detected since January, 2020, to 131,656. Of those, the province deems that more than 93%, or 122,518 people, have recovered.

There are 7,327 people now actively battling infections, with that being the lowest total since March 30.

Another 15 people have died from COVID-19 in the past day, with all but one of those people being 70 years old or older, according to Henry. She added that one person who died was between 50 and 59 years old. Most of those who died were in hospitals, she said.

"These numbers are still too high – way to high," said Health Minister Adrian Dix of the hospitalization numbers. "The pressure on our healthcare system is too high."

Health officials are monitoring 11,781 people for symptoms because those individuals have had known exposure with people who are identified as having been infected.

Henry and Dix sounded positive about the province's vaccination campaign, as more than one million doses of the Pfizer vaccine are expected to come in May.

The provincial strategy was originally to provide second doses of vaccine to people after about four weeks. The timetable for the second dose was then extended to be up to 16 weeks after the first dose.

Henry now says that people who recently received a first dose of vaccine are unlikely to have to wait 16 weeks.

"We are looking at the data of how we do that, over the next few weeks," she said.

In total, B.C. health officials have provided 1,877,330 doses of vaccine to 1,785,599 people, with 91,731 people getting needed second doses. Dix said that this translates into 41.53% of eligible British Columbians now having had at least their first shots.

She said people could be emailed or texted to say that the Pfizer or Moderna vaccine is available for them to get a first shot even if those individuals have already had AstraZeneca shots at pharmacies.

Those people are supposed to ignore the alerts and wait for messages that say that they are eligible for a second shot, Henry said.

She said that it is possible that someone who has already had an AstraZeneca shot could book and get a Pfizer or Moderna shot, but she said, "I wouldn't recommend it."

Henry did not address whether she would extend the province's ban on in-restaurant dining past May 25, but made clear that this summer will not be free of restrictions.

"There's not likely to be big events of any sort, even outdoors, through this summer, and into the fall and winter of next year, but I can see many situations where we could have smaller, distanced, outdoor events this summer, perhaps hundreds of people," she said.

Henry added that the goal is still to have everyone in B.C. who is eligible to receive a vaccine dose to have the opportunity to get one by July 1.

"By the middle of June we should be well on our way [to this goal,]" she said.

That means there are now three hospitals in B.C. that have active COVID-19 outbreaks. They are:
• Dawson Creek and District Hospital;
• Lions Gate Hospital in North Vancouver; and
• Surrey Memorial Hospital.