Who is behind the Sovereign Republic of British Columbia? 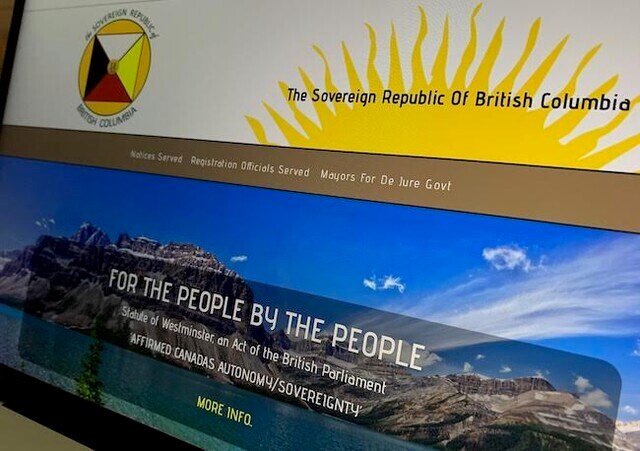 The creator of the Sovereign BC website says the group is a common-law trust and unincorporated business organization.Photo by Jon Manchester

Who is behind the Sovereign Republic of British Columbia?

It also demands governments "cease and desist all social distancing."

The group's website says its goal is to “establish a De Jure government to replace the De facto Corporation British Columbia masquerading as a constitutional government.”

It lists only a Vernon post office box as an address.

A search reveals the https://sovereignrepublicbc.org web address was registered on Sept. 13, 2020, by The Goodly Company, which appears to market "humic and fulvic products."

Humic and fulvic acids are touted by some in alternative medicine as boosting immune function.

The company recently rebranded under the Doc of Detox name.

When reached by Castanet, Joshua Flint, the author of the letter to Okanagan mayors, said he is the owner of Goodly and creator of the Sovereign BC site and organization.

The Kelowna resident said the Doc of Detox partnership is a marketing collaboration and unrelated.

Flint says a second letter has just gone out to the mayors by registered mail.

"Somebody has got to wake them up," he said Tuesday.

Flint asserts the coronavirus isn't real and politicians are breaking the law.

"What we're doing is the first steps of accountability."

Flint says Sovereign BC is a common-law trust and unincorporated business organization. He says it is governed by a group of trustees who appear to call themselves "the sovereigns" on the website.

Flint says the Nuremberg Articles enacted after the Second World War specify that any medical intervention has to be voluntary. Thus, he claims, mandated mask wearing and vaccinations are illegal.

Flint says he "started pounding my drum about five years ago ... we are intent on bringing the law back."

He says if the second letter is ignored, it will amount to an admission of guilt by the mayors.