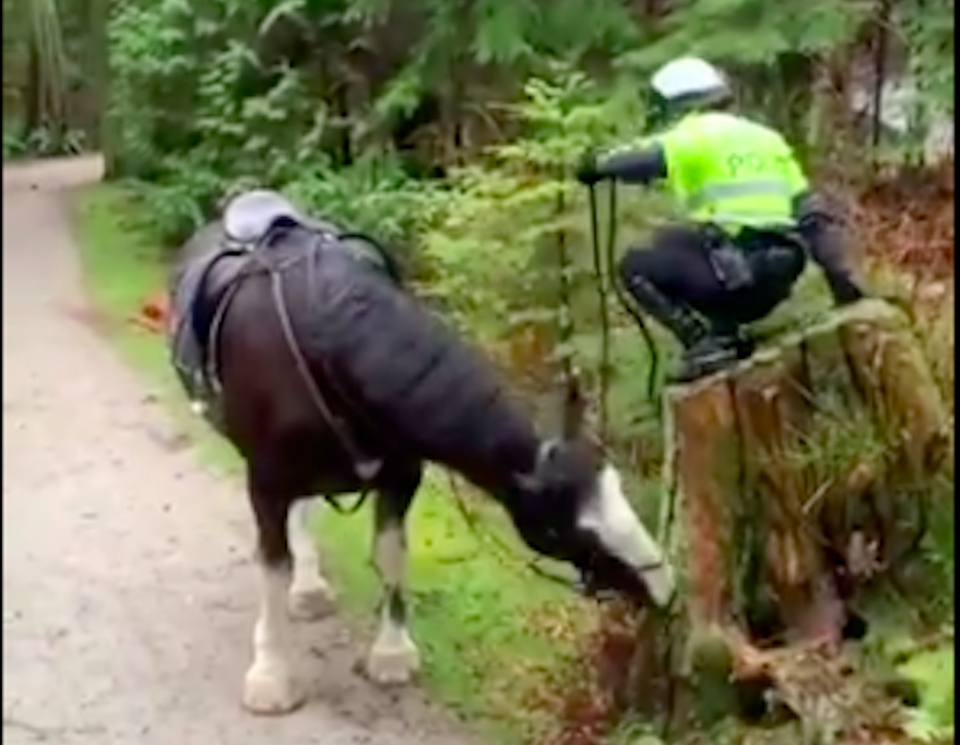 The Vancouver Police Department Mounted Unit has shared an adorable video of an officer struggling to mount her sky-high steed.Photo via @VPDHorses / Twitter

The Vancouver Police Department Mounted Unit has shared an adorable video of an officer struggling to mount her sky-high steed.

The VPD Mounted Unit regularly patrols Stanley Park, and officers sometimes have to make stops along the way. That said, there aren't mounting blocks available for officers when they dismount somewhere along their journey, which may pose problems--particularly when you have a tall horse.

VPD horses have to be at least 16 hands high, if not taller. And as anyone who has ever ridden a horse can attest, mounting can be an especially challenging feat without a mounting block.

The VPD Mounted Unit took to Twitter Tuesday night to share a video of an officer--who they say is on the shorter side--trying to mount a rather statuesque steed. Not only is police horse Ike tall, but he's also rather stocky looking, which can make the mounting process all the more difficult.

The mounted unit also hashtags #GiantHorseTinyContable and remarks that anything is possible with determination.

Earlier this week, the VPD Mounted Unit shared a video of a patrol in the park, which included a picturesque ride past Prospect Point.

PH Turbo and PH Ike did a park round at dusk this evening. No coyotes to be seen, but the view from #ProspectPoint was beautiful! #StanleyPark #PoliceHorse ⁦@VancouverPD⁩ #LionsGateBridge pic.twitter.com/1g8el06n6y

Of course, when the noble police horses aren't on duty, they're back at police horse headquarters getting in much-needed rest and relaxation.

After stepping out for some exercise and getting caught in a surprise hail storm, PH Ike 🦖 was very warmly welcomed back by his concerned besties (PH Stanley and PH Tex) #WhatTheHail #ILikeWarmHugs #TheresNoPlaceLikeHome #PoliceHorse @VancouverPD pic.twitter.com/efGFG9vSWo

What makes a horse a potential VPD candidate?

It’s been over a century since the Vancouver Police Mounted Unit began patrolling the city, and horses must meet specific criteria to be considered for the program.

The horses must be:

Horses are brought in on a 60-day trial basis, during which the horse is subjected to nuisance training in the paddock, such as balloons, firecrackers, and obstacles. If the horse passes the tests, he is slowly introduced to the trails of Stanley Park, eventually moving to the more crowded areas, such as the Aquarium and the beaches.

If accepted, the horse is purchased and issued a badge number. A police officer is then assigned to complete the training of the new recruit.