The crash resulted in full and partial closures of the bridge's southbound lanes for a few hours
Jan 28, 2021 7:52 AM By: Cameron Thomson 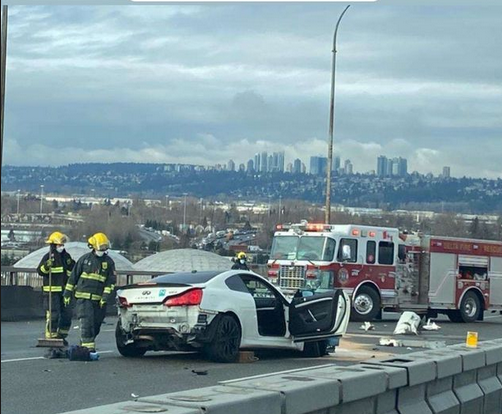 At one point the crash closed all southbound lanes on the Alex Fraser bridge on Wednesday afternoon. imgur

A video has surfaced on Reddit which shows the crash that shut down all southbound lanes on the Alex Fraser bridge on Wednesday afternoon.

The Reddit user who posted the video says it is not his video and was sent to him by a friend who they did not name.

DriveBC first tweeted about the accident at 1:23 p.m. and provided updates on the traffic situation until all lanes were open again at 3:07 p.m.

#BCHwy91 SB CLOSED on the #AlexFraserBridge due to vehicle incident. Assessment in progress. Emergency crews are on scene. #DeltaBC #RichmondBC #NewWest

The crash resulted in traffic being backed up to the Highway 91A exit and eastbound Highway 91. Traffic was backed up to Westminster Highway and Cliveden Avenue from the on-ramp to the bridge.