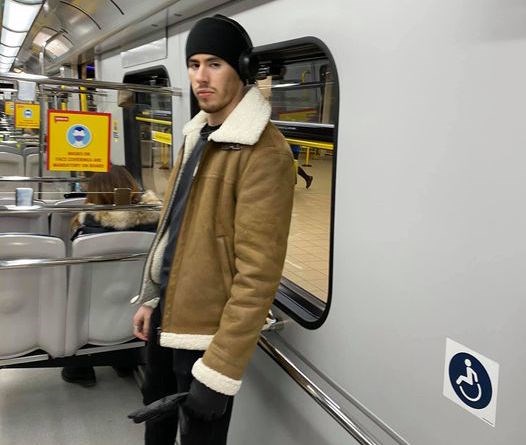 Shannon Pang took a photo of this man, who she alleges pushed her to the ground unprovoked at the Richmond-Brighouse Station.Shannon Pang / Facebook

Police are investigating after a man allegedly pushed a woman to the ground at the Richmond-Brighouse Canada Line Station.

The incident happened around 5:30 p.m. on Friday, Jan. 22 as the woman walking down the stairs and leaving the station, according to an email from the Metro Vancouver Transit Police. The man walked up the stairs toward the woman.

"He allegedly bumped into her causing her to fall backwards onto the set of stairs. The suspect continued walking up to the platform, where he left the station on an inbound Canada Line train," states Cst. Mike Yake in the email.

Transit Police attended the scene and spoke with the woman and are investigating the incident.

On Facebook Shannon Pang has identified herself as the woman who was pushed to the ground and described the incident.

"The man who did this was walking in the opposite direction in my direct path, made eye contact with me and proceeded to maintain course— forcefully knocking me backwards with his body," she writes. "I’m not seriously hurt other than my emotions. Many bystanders witnessed this and did nothing, said nothing. And the man who did this simply walked over me and boarded the train."

Pang writes that she followed the man onto the SkyTrain and snapped a photo, noting he wasn't wearing a mask (which is required on public transit in B.C. due to the pandemic). She adds that while she wanted to hurt him, she didn't know what to do other than take a photo and call the police.

Transit Police police describe the man as "a Caucasian male in his 30's standing approximately 6'3" with a slim build and dark brown hair. At the time of the incident, he was wearing a black toque, beige jacket with white trim, skinny black pants and black shoes."

While they didn't share an image of the man, the description matches that of the man in Pang's photo (as seen above).

In an update, Pang says the man's name is known and that she's heard he's done similar things before.

"Thank you to those who have shared their personal stories, you are incredibly brave. It takes courage to be vulnerable. We all deserve to feel safe walking in our city and taking transit," she writes in the update.

The transit police are actively investigating the case, Yake writes.

"To protect the integrity of the investigation, we will not be providing further details at this time. We are hoping to provide an update over the coming days," he writes.

He adds that anyone who witnesses an assault or are been involved in similar incidents can text transit police at 87-77-77 in a discreet manner during incidents.