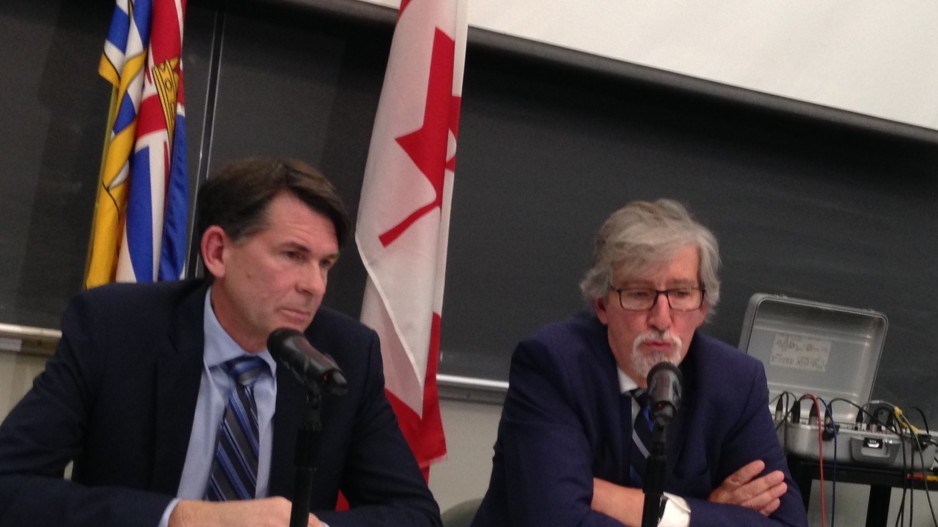 And that, they said, is a clear violation of the privacy rights of Canadians, the commissioners’ investigation has found. Those violations are of federal and provincial laws, they said.

“What Clearview does is mass surveillance and it is illegal,” Privacy Commissioner of Canada Daniel Therrien said. “It is completely unacceptable for millions of people who will never be implicated in any crime to find themselves continually in a police lineup.”

They said Clearview AI’s technology allowed law enforcement and commercial organizations to match photographs of unknown people against the company’s databank of more than three billion images for investigation purposes.

That included millions of Canadian images, they said, adding people did not place their images online for that collection purpose, meaning the law was broken.

“Much like our fingerprints and DNA profiles, our faceprints rely on permanent, unique facts about our bodies — like the distance between our eyes and noses or the shape of our cheekbones — to identify us,” the ACLU said in a news release about Clearview.

The report said those collections were “in apparent violation of those organizations’ terms of service and without the consent of individuals.”

And the commissioners said, there have been multiple reports confirming that Canadian law enforcement agencies and private organizations had used Clearview’s services in order to identify people. Moreover, they said, 48 agencies are using such technology, most of them in law enforcement.

B.C. Information and Privacy Commissioner for British Columbia Michael McEvoy said there was no evidence of B.C. agencies were using the technology but added five individual officers had.

“Those forces are distancing themselves from this technology,” he said.

He said people should not have to feel a chill about social media use but recommended precautions such as locking down information so only selected people can see it.

But, Therrien said, the company continues to claim its purposes were appropriate, citing the requirement under federal privacy law that its business needs be balanced against privacy rights.

“It is unacceptable and deeply troubling that a company would create a giant database of our biometric data and sell it for profit without recognizing its invasive nature,” McEvoy said.

“The results of our work also point to the need to strengthen our privacy laws to properly protect the public,” he said.

“It’s deeply troubling that a company would collect a giant database of biometric information and sell it for profit,” McEvoy said.

Therrien suggested Parliament reviewing privacy laws may wish to send a clear message, through legislation “that where there is a conflict between commercial objectives and privacy protection, Canadians’ privacy rights should prevail.”

In recent years, commissioners have frequently expressed frustration with the lack of power they have in enforcing their findings. They are hoping pending legislation, Bill C-11 Canadian Consumer Privacy Protection Act and its associated regulations, will address greater powers to protect Canadians’ privacy rights.

McEvoy stressed the ability to levy financial penalties is vital as a deterrent to such cases.

“We’re frustrated and feel like it’s groundhog day when time and again we’re seeing organizations trying to get away with this and getting caught,” B.C. Freedom of Information and Privacy Association executive director Jason Woywada said.

“The commissioners reaffirmed that just because a person posts something online does not mean that person is consenting to it being used beyond its original purpose,” he said. “If a company uses existing images to create unique sensitive biometric identifiers, this is itself a form of personal information collection – and it is also subject to privacy law.”

However, Woywada said, it’s clear there is a market for such technology in Canada.

“It’s pretty damning,” he said of the report. “The only punches they pulled were against police forces.”

He said police are outsourcing information technology needs, something that needs greater oversight.

To that end, commissioners said they are creating a guidance document for police forces on the use of such technology. That should be released in the near future.

Therrien said the company had offered to remove people’s images as it had in Illinois. There, he said, the company wanted people to send an image so software could identify other images so as to remove them.

He said it was ironic for the company to ask people to provide identifying images of themselves.

“We’re not satisfied with the likeness solution,” he said.

The report is the result of a probe announced last year following media reports raising questions and concerns about whether New York City-based Clearview AI was collecting and using personal information without consent.

The company’s technology allows the collection of large numbers of images from various sources to assist police and financial institutions identify people.

McEvoy and federal Privacy Commissioner Daniel Therrien along with their Alberta and Quebec counterparts examined whether the organization’s practices are in compliance with Canadian federal and provincial privacy legislation.

They agreed to work together to develop guidance for organizations – including law enforcement – on the use of biometric technology including facial recognition.

It was revealed last February that Hamilton police had been trying out company software but were told to stop.

“There are vital privacy issues at stake with the use of any facial recognition technology,” Beamish said. “We question whether there are any circumstances where it would be acceptable to use Clearview AI.

He said other police services using such technology should stop immediately.
In B.C., people aren’t strangers to the use of facial recognition. It was used following the 2011 Stanley Cup riot.

Edmonton police have said they would use facial recognition technology – but only for identifying established criminals.