Surrey police: How it started and how it’s going

A historic transition from Surrey RCMP to the Surrey Police Service has come under political fire but the new SPS chief says delays will be smoothed over by 2024
Apr 1, 2021 1:01 PM By: Graeme Wood 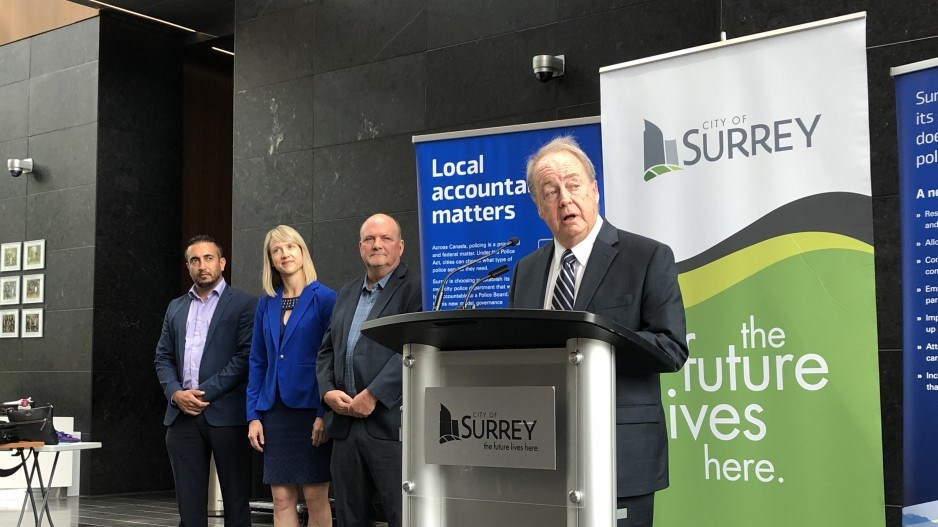 Surrey residents can now circle 2024 on their calendar as the first full year the Surrey Police Service (SPS) could be operational, according to inaugural chief Norm Lipinski.

“I think with everything going according to plan, I think by the end of 2023 we will be either there or close to being there,” Lipinski told Glacier Media.

“There's a clean canvas that we're working with. And there's no playbook and it hasn't been done before,” said Lipinski, Delta’s former deputy chief.

As recently as February, 2020, Surrey Mayor Doug McCallum had asserted today (April 1, 2021) would be the day residents would see SPS “boots on the ground.”

McCallum had been echoing the June 2019 Surrey Police Transition report prepared by the City of Surrey in conjunction with the Vancouver Police Department. The report’s ambition reflected that of the mayor’s to get the project off the ground from the very first council meeting in November 2018, when a unanimous vote gave notice to Surrey RCMP that its days were numbered.

But within months, the mayor’s strong coalition of eight crumbled to five over accusations McCallum was dictating the process. The mayor upheld that his pre-election promise to turf the RCMP negated any need for public consultation. Councillors Steven Pettigrew, Jack Hundial and Brenda Locke abandoned McCallum’s Safe Surrey Coalition (SSC) slate in 2019, joining Coun. Linda Annis as an unofficial block against the remaining SSC. What seemed like a political honeymoon turned into political hell with acrimony and disorder becoming the norm at council meetings.
And so, while the rationale of Surrey obtaining its own force seemed sound – with it being the only major city in Canada still using the Mounties – the process, and in particular the costs, became, as Premier John Horgan put it during the October 2020 provincial election campaign, a political “hornet’s nest.”

The question now, at least from McCallum’s opposition, is whether the project can reach a point of no return by the October 2022 municipal election, when it’s expected some candidates opposed to McCallum will propose a referendum.

The SPS was initially billed as a fresh beginning at a time when policing in North America was under intense scrutiny over gender and racial bias and use of force tactics. It also comes as the provincial government conducts consultation on Police Act reform. A key concern across the continent is transparency.

And there are no signs, to date, the SPS is offering anything novel. Details, such as basic reports on policy development, recruitment, timeline and the bottom line for taxpayers remain generally outside the purview of the public.

Simon Fraser University criminologist Rob Gordon says “without a shadow of a doubt” the public has been shut out of the process.

Starting with basics, he said, “We don't know what the new police service philosophy is going to be. There’s some vague references to community policing, and so on and so forth. But it's still not absolutely clear to me what the model will be,” says Gordon.

“I'm no friend of the RCMP. I think they should be out of municipal policing.

“But in this instance, I don't think a transition has been done very well. And the government's missing an opportunity to actually address the whole issue of the structure and organization of policing in B.C.,” says Gordon, who also sees the transition as another missed opportunity for a regional police force.

And, “There should be no holding back on the provision of information unless it is clearly likely to affect the integrity of an investigation,” added Gordon.

The Surrey Police Board (SPB) was established in February 2020. The board now has a governance policy manual, but the board never discussed it publicly. Policies appear to be adapted from existing municipal police boards. For instance, SPB board members are not allowed to speak freely to media and they have no contact information publicly available.

The board has publicly discussed, briefly, the importance of an Indigenous policing strategy.

However, controversy has surrounded the appointment of Harley Chappell, elected chief of the Semiahmoo First Nation. Last December, Chappell had to explain recent social media posts of him with Hells Angels members. His father, as it turned out, was once a full patch member. Chappell has remained on the board with support from the Minister of Public Safety and Solicitor General Mike Farnworth.

Shortly after, B.C.’s director of police services Brenda Butterworth-Carr resigned citing personal reasons. Documents obtained by Glacier Media show the director had conducted secondary interviews for all board appointments except Chappell, who received special “Indigenous peoples consideration.” It’s still unclear if Farnworth and Butterworth-Carr knew of Chappell’s organized crime connections, however much they may be at arm's length today. Gordon says full disclosure needs to happen.

Glacier Media provided McCallum, who chairs the board, an opportunity to speak broadly about the transition process, but he declined.

McCallum has taken heat on the city side of the process, most recently by increasing a household parcel tax from $100 to $300 to pay for capital projects, which includes the police transition that was initially pegged at $45 million but the latest figure is $64 million.

The parcel tax will raise $49 million this year while the city spends just $35 million from its operating reserve on major capital projects. The city is also borrowing $130 million for two proposed major recreation complexes, thus freeing up more parcel tax money in subsequent years (and punting capital project costs down the road).

Additionally, the municipal force is expected, according to the initial report, to cost about 10% more annually than the Surrey RCMP, factoring in the loss of a federal grant and future RCMP unionization.

McCallum’s preference for zero-based budgeting suggests SPS could be a roadmap for how police services can cut costs amid protests/concerns of ballooning police budgets.

But unavoidable hidden costs may lurk around the corner, opponents suggest.

First, for example, the information technology (IT) system was once estimated to cost $7.5 million, but Lipinski has estimated it now stands around $21 million (thus the increase to the budget estimate). But some experts suggest IT could soar to between 35-40 million, if not more, due in part to the emergence of encrypted technologies and new 5G networks.

Second, Surrey RCMP uses RCMP facilities for training (in Chilliwack) and evidence storage and lab work (at Green Timbers provincial headquarters). SPS anticipates it will eventually need a training facility. Vancouver built a new one, including a storage facility and forensic lab, in 2011 for about $50 million.

Third, the transition report is also based on maintaining roughly the same number of officers as the Surrey RCMP, whose force stands at 792 (authorized at 843) and has been frozen for three years due to the SSC’s reluctance to hire more Mounties. (Lipinski says he’s not worried criminals have had an upper hand in better organizing themselves over these years.)

SPS is budgeted to have 805, including 16% more frontline officers. In contrast, Vancouver Police Department had 1,327 officers in 2019, although that includes special teams such as homicide. SPS will continue to use the regional RCMP homicide team.

Also, as it relates to specialized units, the transition report makes no mention of a marine unit. Surrey has a river to the north and the ocean to the south to consider.

But despite the many growing pains and unknowns, Lipinski remains confident he can muster his growing team and get the hires he needs.

He said he’s not set on 805 officers as he will be completing environmental assessments of the city’s five districts to see what’s actually needed.

Lipinski is cognizant of the sheer size of the city. He says he wants a response time of seven minutes and that could mean more officers are required.

“We're in a position now where we have to do a lot of estimations. But who determines what the response time is? It is the community,” said Lipinski.

Another estimate being done by deputy chief Jennifer Hyland is how many officers are coming from Surrey RCMP and other municipal detachments.

“We are extremely, extremely happy with the level of significant interest proactively shown by members of the RCMP and all municipal agencies, not just in B.C. but across the country and proactively pursuing jobs.”

SPS is planning to send its first batch of new recruits to the province’s police academy, the Justice Institute of B.C. (JIBC) in January 2022. In total, JIBC is preparing for 48 new recruits through 2022.

That leaves about 750 existing officers to be hired. The more Surrey Mounties that stay in Surrey the less disruption there could be to B.C.’s other 12 municipal departments, which would then have to recruit new officers themselves. Opponents of the transition, such as Hundial and Locke, have called for a provincial impact assessment, including recruitment and ancillary costs such as more resources for the Office of the Police Complaints Commissioner and Independent Investigations Office of B.C. The former has already increased its budget in 2022 to plan for the transition.

Meanwhile, the RCMP union, the National Police Federation (NPF), has become a strong voice in Surrey, spending over $100,000 as a third party advertiser in the provincial election and casting shade on the process. Its polls show little interest from Surrey Mounties in leaving the RCMP and public opinion opposed to the transition.

Regarding NPF concerns about pension portability and equity, Hyland said no Mountie will be losing money, although they would have a choice to top up their new municipal pension, which is larger than the existing RCMP one.

Hyland, who was the Officer in Charge in Ridge Meadows RCMP before coming to SPS, said some Mounties will need to update their training to match adopted SPS policies.

Lipinski says SPS has already adopted policies, including use of force, from two other police departments but said he’d need permission from them to reveal which ones.

He said this was needed in order to guide himself and 18 other hired officers who are now active officers. It is now up to the board to make any amendments to those policies, he said.

But perhaps the biggest hurdle for Lipinski is the actual deployment of SPS.

Although the city appears to be budgeting for a smooth transition with no overlapping costs, Lipinski has made it clear that residents will not all of a sudden wake up one morning to SPS on the streets with no Mounties.

“So what we are exploring now with the federal government and the province is, what's the best model from a legal perspective? What's the best model from a practical perspective, logistically? And when you're talking about the RCMP and then scaling down and scaling off? And what are the logistics? What about the equipment? What about the cars, etc.? So that's where we're at with that sort of issue,” he said.

Meanwhile, the “boots on the ground” adage continues, with Lipinski promising some badged SPS officers by the end of this year.