It’s been over 50 years since Jo-Ann Nahanee attended the Kamloops Indian Residential School, but it’s an experience the Squamish Nation woman has been haunted by for much of her life.

Nahanee was sent to the Kamloops residential school, run by the Catholic Church, from age nine to 13, during the 1960s, along with her younger sister and two of her older brothers.

The lessons she learned there are ones it has taken decades to try to undo: how to be ashamed, how a child’s small transgression of arbitrary rules would be severely punished. How not to talk about hard things.

When she heard the news last week that a preliminary survey on the school grounds had uncovered the remains of 215 children with ground penetrating radar, Nahanee said a part of her was not surprised.

There were whispers and rumours, but never any explanations about how and why certain children seemed to just disappear at the school, she said.

'They were just gone'

“All we knew was that somebody that we knew never came back to the school,” she said. “They were just gone. There was no talk about why they were gone.”

“It was always the unknown, the un-talked about.”

Her younger sister had a best friend at the school, said Nahanee, who was one of those who vanished with no explanation. To this day, Nahanee said she doesn’t know what happened. “Her name was Rosie,” she said. “Rosie disappeared and we never saw her again.”

According to the Truth and Reconciliation Commission, large numbers of Indigenous children who were sent to residential school never returned home. Some died of diseases like tuberculosis while others died trying to run away. In many cases, parents didn’t find out what happened to their children and the names of those who died weren’t even recorded. Current estimates put the number of children who died across the country at between 3,200 and 6,000.

When the news broke about the discovery of the unmarked children’s graves in Kamloops late last week, Nahanee said she knew she had to go to the school site and sit with that part of her past. She made the trip with an older brother – who had attended a different residential school – and nephew, on the weekend.

Nahanee said while she previously documented her residential school experiences for the Truth and Reconciliation Commission, she had never spoken of them with her own siblings before now. “There’s shame and there’s guilt and there’s fear,” she said.

Nahanee, now 66, remembers arriving at the large, imposing school building when she was nine after travelling by train from Vancouver. At the time, she didn’t know anything about residential schools, she said – including the fact her own parents had attended them as children.

“Where are we? Why are we here?” she remembers thinking. “All those scary questions were going around in my mind.”

Boys and girls were quickly divided into separate dorms and younger children were separated from older ones. The result was she was quickly cut off from her siblings, said Nahanee, only managing to sneak in a few quick conversations in the dining hall. “If we were caught, we would be punished,” she said.

Children from rural areas used to speaking their Indigenous languages would be cruelly punished for not speaking English, she said.

Physical punishment also extended to the classrooms where the nuns who taught her were “mean and abusive,” often slamming pointers on desks to get students’ attention and hitting students with yardsticks if they failed to answer questions correctly.

Children who became ill were not properly cared for, she added. One time her brother stopped a boy who was delirious with a high fever from jumping out a window.

Her younger sister, who wet the bed, was subject to the humiliation of being paraded with the wet sheets wrapped around her in front of other girls, said Nahanee.

Nahanee said she suspects her siblings may have been subject to worse treatment than she knew about. “It was an unsaid threat that we didn’t talk about it,” she said. “You would get punished more.”

She adds there are parts of her own residential school experience that she can’t remember. “It’s so horrendous that I blocked it out,” she said. “I did anything to survive in that environment.”

She’s often felt guilty that “I wasn’t harmed as much as the other kids.”

It has been a long and painful journey out of it. With her own kids, “I was very strict with them,” she said, because that’s what she’d learned about how adults treat children. “I talked to them the way that I was talked to.”

She lacked life skills and fought, successfully, to become sober over 30 years ago. 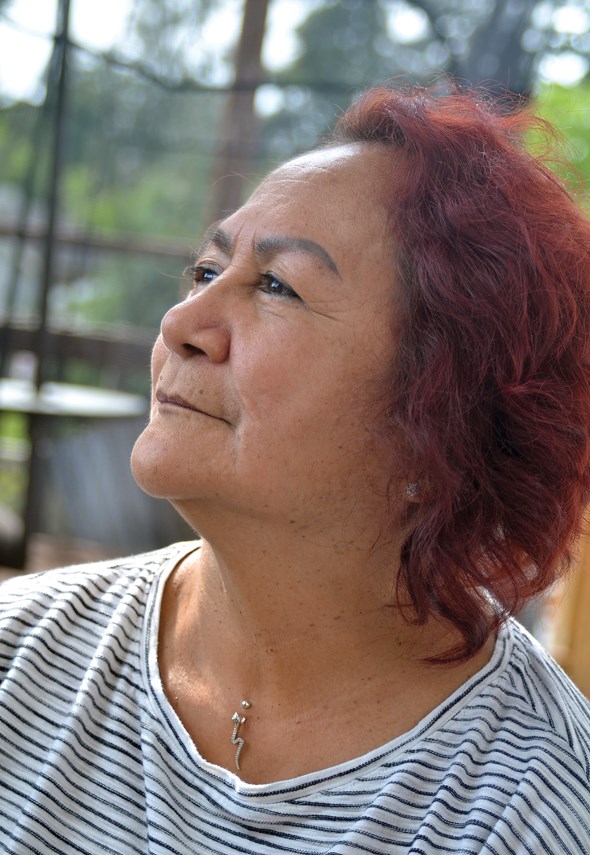 Jo-Ann Nahanee of the Squamish Nation reflects on her experience at the Kamloops Indian Residential School. By Paul McGrath, North Shore News

For a long time, she was angry at her parents for sending her to residential school, she said.

“Then I learned it was the law that I had to go. So I couldn’t blame my parents. I had to work to forgive them.”

One of the lasting impacts, she said, is the way the school took away her culture, not just overtly but by causing her to reject it as shameful. “I have not been able to accept my culture back into my life,” she said. “That’s the biggest damage that’s gone on.”

While at the Kamloops residential school site this weekend, Nahanee walked the grounds and came close to the area where the remains were located. “For me it was healing to sit in those memories. To sit in that pain,” said Nahanee.

She and her brother made a tobacco offering to bring prayers and healing to both the children whose remains were discovered and others who attended the school, said Nahanee. They were joined by four other elders who also shared their experiences of attending the Kamloops residential school, said Nahanee.

“It was comforting to know I wasn’t alone.”

Nahanee said she would like to hear a genuine apology for what went on at residential school from both the government of Canada and the Pope, as head of the Catholic Church.

Nahanee has previously spoken about her residential school experience and “I’ve had people come up to me and say they don’t believe me. I believe it’s so awful they can’t believe that people would do this to children.”

For immediate assistance to those who may need it, the National Indian Residential School Crisis Line is available 24 hours a day at 1-866-925-4419.