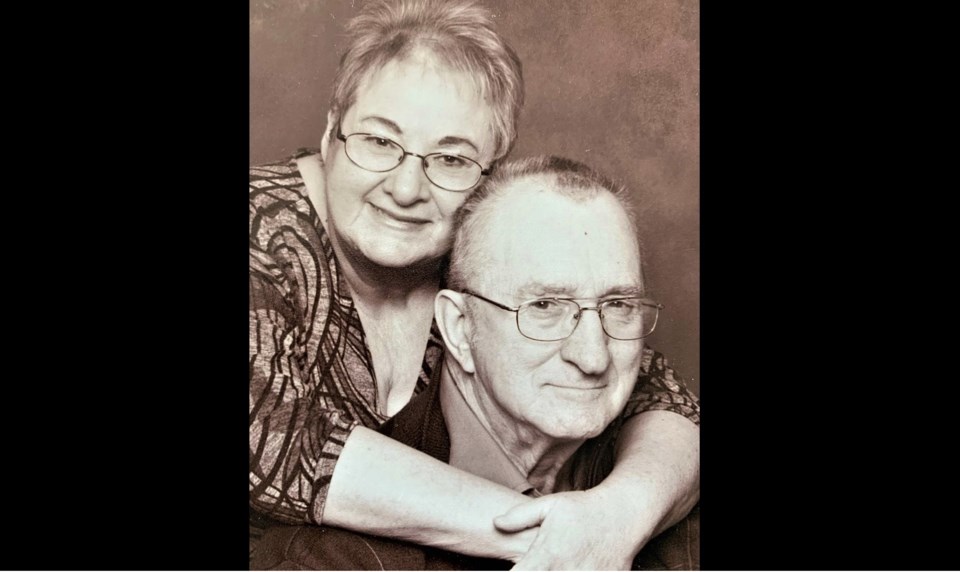 Prince George couple Helen and John Eberherr got engaged within a week of meeting each other and were married a month later. Married for 54 years, they both became infected with COVID-19 just before Christmas and died this year within 11 days of each other at UHNBC.Contributed

A parade of horn-honking, light-flashing, siren- blaring people in their vehicles arrived at University Hospital of Northern BC Saturday evening to salute health care workers inside the hospital and their dedication and bravery caring for patients while the pandemic continues to reveal its ugliest face yet.

It was Tracy Glaicar’s way of saying thank you to hospital staff who tried their best to help her parents, John and Helen Eberherr, fight off the virus. Their COVID battle ended tragically in the first two weeks of 2021. John, 85, died of pneumonia on January 5th and on Saturday morning his broken-hearted wife Helen, 78, lost her life to the infection.

“We don’t actually know who got it first, they kind of got it together – they did everything together,” said Glaicar.

Helen called Tracy on Dec. 23 and told her John wasn’t feeling well and had lost his appetite. His health had been failing him ever since he had an allergic reaction to the anesthetic in a knee operation two years ago which led to a heart attack. Helen, who walked every day around her College Heights neighbourhood for exercise, was in good health and when she told her daughter about John, Tracy suggested they get tested for COVID. Despite John’s initial refusal to go in for the test, he finally gave his verbal consent and she made an appointment for each of them on the 24th.

On Christmas Day the tests both came back positive, but they weren’t hospitalized until the 28th, when Helen called to tell Tracy that John was getting quite sick. An ambulance was called to their apartment and the paramedic told them that both needed to go to the hospital right away. John was taken to the high-acuity ward at UHNBC while Helen was sent to the infectious disease unit.

Doctors discovered in John what was thought to be a stomach ulcer, which might have caused his loss of appetite, but he had none of the other COVID-19 symptoms – cough, fever and flu - that showed up in Helen once she was hospitalized. A Type 2 diabetic, Helen’s eating habits controlled her blood sugar levels but she was unable to keep her diabetes in check when she became ill and was dizzy and sluggish when the ambulance arrived.

“It progressively got worse and worse and went from nasal oxygen to high-flow oxygen to a BiPap machine,” said Tracy. “Both my mom and dad talked to the doctor when they went in, saying no ventilation or intubation, no extreme (life-support) measures and that’s what it came down to.

“For mom to not come out of it knocked the crap out of us, because she was pretty healthy. She was walking all the time, would take the stairs at the apartment instead of the elevator to keep mobile and as far as fitness she was doing well. We’re super-shocked she didn’t survive it.”

Tracy has no idea where John and Helen were exposed. Helen did most of the shopping and was the most active and it could have somewhere at the shopping centre she used to walk to or perhaps someone sneezed in the hallway of their apartment building. She will never know. They followed all the precautions health authorities are preaching but still they could not avoid it.

“Dad’s health wasn’t great,” she said, “and in a way when he went in, we as a family all thought, ‘Dad’s probably not going to recover.’ At the same time we were OK with that because he was at peace with it. He passed away really quickly, like 20 minutes after the BiPap machine came off.”

John had just been moved into palliative care and his son Kevin was able to visit him just before he died. In the time that Helen was conscious, nursing staff was there constantly to field calls and hold her iPad for her for Facetime conversations from her three kids and five grandchildren, but the calls were short with her strength diminishing. Eventually, her breathing had become so laboured, the doctor said she would not likely survive being disconnected from the machine to enable a move to another ward that allows visitors. When the end did come for a heavily-sedated Helen, she was taken off her oxygen on Thursday night, and the family expected she would, like John, pass away quickly, but she continued to breathe on her own and was moved, which allowed her son Trevor to be with her in her final hours.

John was born and raised in Prince George and left school with a Grade 7 education to work full-time in his dad’s sawmill and was working in maintenance at Canfor’s Netherlands Overseas Mills when he retired. Helen was a stay-at-home mom until Tracy and her brothers Trevor and Kevin were old enough to look after themselves and she went back to work at the Royal Bank. Helen was 23 when she came to Prince George and had just moved up from Kelowna to work at the bank, not knowing anybody in the city, when a co-worker, John’s sister Loretta, invited her to Christmas dinner and introduced Helen to John, who was 30 at the time. It was love at first sight. A week later they were engaged and within six months of that, they were married.

That was 54 years ago and their love affair never waned. Only death could break them apart.

“She was actually doing OK with her oxygen levels and then once she heard about dad passing she got so upset and so depressed and life started to leave her,” said Tracy. “We all suspect there was a bit of broken heart going on there.”

Tracy’s husband Jim retired recently from the BC Sheriff Service and some of his colleagues showed up for Saturday’s health care worker parade in their work vehicles along with a few volunteer firemen. They flipped on their light beacons on and utilized short blasts of their sirens to gain the attention of hospital workers who waved from their windows.

After a year-end spike across the country, cases of COVID are at near-record levels with nearly 500 active cases in the Northern Health region, 44 people currently hospitalized with 13 in intensive care, and 48 deaths as of Friday. After the initial wave of the pandemic in the spring which brought people out of their houses at 7 p.m. every night to bang pots and salute hospital staff, those public displays of support have mostly stopped.

But the risk for health care staff in the hospital and long-term care homes becoming infected themselves or bringing the virus home to their families has never been more real. They still have to show up for work every day and Tracy and her family wanted to do something to show their appreciation. Her daughters made thank-you posters that were left at the front entrance with all the names of the doctors and nurses who did their best to try to save their grandparents.

“God bless them, I don’t know how they do it, they’ve had to watch so many deaths in a short little time,” said Tracy. “It’s scary when you’re watching it every day and it goes through that many people.

“We wanted thank them, but they said they couldn’t accept anything right now, you can’t send flowers, you can’t send cards, you can’t send chocolates. All that recognition to our health care workers had gone away and now they’re in the midst of it, there’s COVID at the hospital, and we’ve kind of stopped doing it and now is when we need to do it.”

Losing both parents to COVID has changed Tracy’s perception of how much a threat the disease poses and she has stepped up her own vigilance to avoid it. She always did wear a mask going out in public and kept her hands clean but now she’s carrying her own sanitizer to wipe down the cart when she goes grocery shopping. Until vaccine supplies become widespread, she says everybody is vulnerable.

“There’s still a lot of people out there who aren’t taking it seriously,” Tracy said.

“I was more under the belief, how bad can it be, because I do know people who have had, but younger people. I even know someone who had it who was asymptomatic and he didn’t know he had it until had a test done for work and it came back positive. This is somebody we’ve been around because we’re friends and I’m thinking we could have all got COVID and not known where it came from because he didn’t even know he had it.

“I don’t want someone else’s parents to go through what we did, and for those who have elderly parents, seriously, stay away from them until we get the vaccine because you don’t know what you’re bringing them. I know for the majority of us, COVID won’t affect us like that, it might just be a cold and a sniffle, but it’s what you might be passing on to someone else. Every time I see an old person in the grocery store I’m thinking, ‘you need to order online, why are you here? Don’t take risks.’”