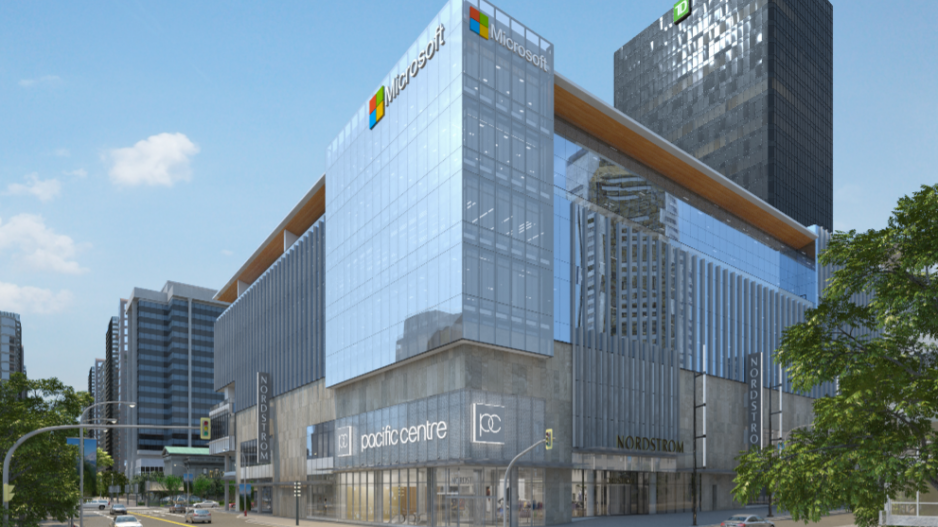 A rendering of Microsoft's Vancouver office at Pacific Centre.Submitted

Microsoft Corp. is turning up the pressure on Vancouver tech companies in the hunt for local talent.

The American tech giant revealed Wednesday it’s expanding its local roster by 500 people this year at the same time demand for tech talent has been ramping up on the West Coast.

The new hires will be tasked with working on projects ranging from mixed reality applications to the Microsoft Azure cloud computing service.

This year’s 500-person expansion will bring Microsoft’s local presence to 1,700 workers and comes at a time when demand for local talent has been increasing.

In February alone, B.C. added 7,400 jobs in professional, scientific and technical services as parts of the economy have rebounded sharply following the initial uncertainty brought on by the pandemic.

Meanwhile, Vancouver has added 27,500 highly sought-after tech workers to its labour pool over the past five years, according to November 2020 research from real estate services firm CBRE Group Inc.

The city now boasts a pool of 84,900 tech workers at its disposal, which is proving to be a draw for Microsoft and Amazon.com Inc. — the two largest occupiers of downtown real estate, according to CBRE.

“From the North American perspective, the skilled pool of Canadian tech workers paid in discounted Canadian dollars is a significant draw for companies contemplating where to expand operations,” the report stated.

“In particular, Toronto, Vancouver, Montreal and Edmonton provide the best value in North America when it comes to cost and quality. All are within several percentage points of coming in at half the cost of operating in the San Francisco Bay Area.”

And while big companies like Shopify Inc. have backed away from plans to set up significant physical offices in Vancouver amid the pandemic, a Tipalti chief marketing officer Rob Israch told BIV last year the company remains committed to its Vancouver presence.

The company, which specializes in automating the payables process, is coming off a Series E funding round that raised US$150 million in September 2020.

It plans to hire 300 new workers across its global offices this year.