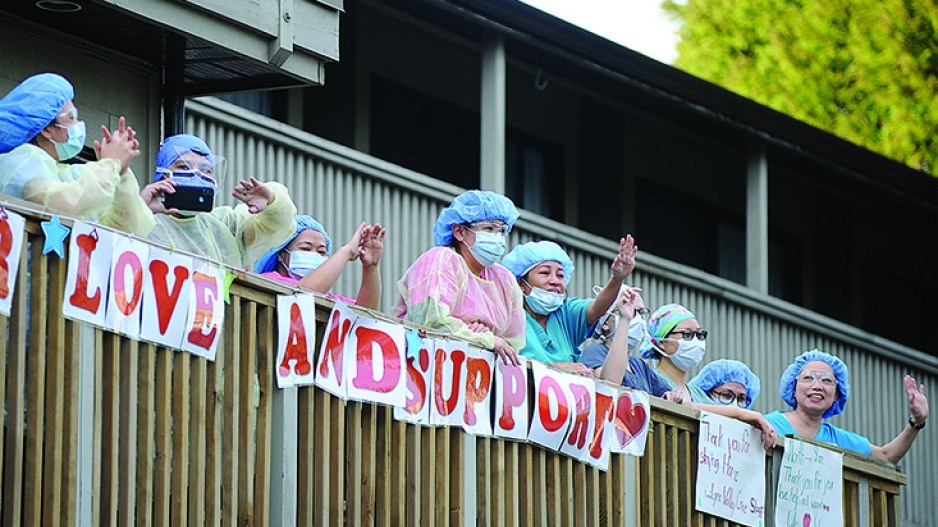 Lynn Valley Care Centre staff thank the community members who showed up to cheer them on during a nightly 7 p.m. health-care workers’ salute in April. The centre suffered 20 COVID-19 deaths despite a record of few past problems.Mike Wakefield, North Shore News

Now that B.C. has rolled out its COVID-19 vaccine plan, health-care professionals are questioning why a report on the fatal spread of COVID-19 in long-term homes has yet to be made public.

Langley Lodge was hard hit in the pandemic’s early days. By the start of the second wave, the facility experienced 26 deaths, the most to date of any B.C. home.

Langley Care Society CEO Debra Hauptman penned a report on the situation, offering a blueprint and a warning for how to weather an outbreak at a long-term care home during a second wave.

She said she shared that report with Ernst & Young last August and answered questions on it. She had expected its report in November.

“They could have helped our sector with that second wave which has been particularly bad,” Hauptman said.

She added information on handling the pandemic response is also available through the health regions and the sector.

“The Ernst & Young report will reflect that,” she said.

• challenges accessing personal protective equipment and education in its use as well as infection control;

• staffing shortages, including the pros and cons of the single-site order for workers;

• impacts of visitation rules on seniors, their families and workers, and;

• clear and consistent communication from government.

In the last case, Lyle said, messaging from Minister of Health Adrian Dix and provincial health officer Dr. Bonnie Henry “was good” but communication became confusing as it filtered through other levels of government.

Dix told reporters Jan. 22 the report was completed late October or early November. And focuses on how the ministry can provide better services.

“Those are not issues that Ernst & Young would be dealing with,” Dix said.

However, critics are calling for greater transparency around information release, a month after a University of British Columbia (UBC) report found poor communication from provincial government as well as unions posed problems in keeping seniors safe.

BC Liberal Leader Shirley Bond said that if the report had significant implications for “how we care about our most vulnerable,” with practical ideas for improvement, “of course it should have been made public.”

“It’s only after pressure that this report will be released next week,” she said, adding it must be released in its entirety.

“Why has it been left sitting?”

Glacier Media examined the situation at long-term care homes in a special series in July. Reporters found concerns about the financialization of homes, systemic failures and lessons already being learned as the second wave, now well underway, was anticipated.

Among that study’s findings was that poor communication from provincial government, unions posed problems in keeping seniors safe.

“None of us has seen the report,” Keselman said. “I believe it comes out Monday. I don’t know to whom, what format. It would be nice to have.”

Meanwhile, B.C.’s seniors advocate Isobel Mackenzie announced mid-January she would launch a review into some of the most deadly COVID-19 outbreaks in the province’s long-term care sector.