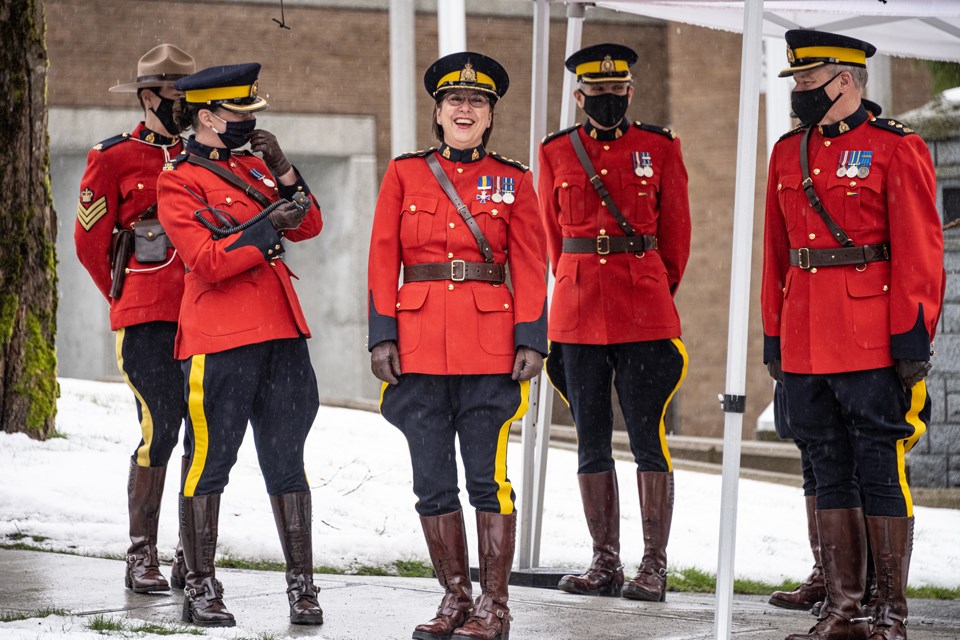 Chief Supt. Deanne Burleigh, the officer in charge of Burnaby RCMP, was honoured during her last day before retirement last Monday.Burnaby RCMP

Standing outside of the Deer Lake detachment surrounded by her senior team in dress uniform, Chief Supt. Deanne Burleigh was handed a police radio and signed off for the last time.

In the age of computers, it’s mostly a symbolic gesture, but it was no less emotional.

Burleigh, who took over the Burnaby detachment in 2017, knew she wanted to be a Mountie when she was 12 years old, the year the force announced it was going to start accepting women.

Looking back, she says her concept of what it would be like to be a cop (“I thought I was going to arrest bad guys and put them in jail”) couldn’t have been more different from the way her career has ended up.

“At 12, I never thought that my job would be talking to politicians, talking to the media, working to support things like BMART (the Burnaby Mobilization and Resiliency Table),” she says. “I never looked at myself as a person who could be that collaborative and that cooperative to make those things happen, and yet that’s 100% what I believe in.”

When asked what she has been most proud of in her career since she actually joined at age 23 in 1985, she says it’s the feeling that she really has made a difference.

“It came in all the messages that I received when I announced my retirement, when people said, ‘You helped me. You made a difference,’” she says. “It truly is making the workplace better for the people that work there and for making the service delivery stronger for the people in the community. That’s what I’m most proud of, that people actually noticed that.”

Burleigh says she’s not sure what the future holds for her besides a summer in the Okanagan at her new place, but future policing work hasn’t been ruled out.

“There’s a million things you can do part time, but I’ll cross that bridge when I’m not tired anymore – or I won’t,” she says.

Supt. Graham de la Gorgendiere will take over officer-in-charge duties at the Burnaby RCMP until Burleigh's replacement is found.

Former Vancouver hotel to be converted to 65 units for homeless people by the fall
Mar 1, 2021 10:09 AM
Comments

500
Here’s where people who are homeless in New West can enjoy a hot shower and get a comfort kit
262
Luxurious residences are setting a new standard of living in Langley
216
UPDATE: Here's where you could be able to buy cannabis in New West
115
New West now grappling with second big COVID-19 outbreak
65
Canadians are outraged by the new egg patty in Tim Hortons' breakfast sandwiches