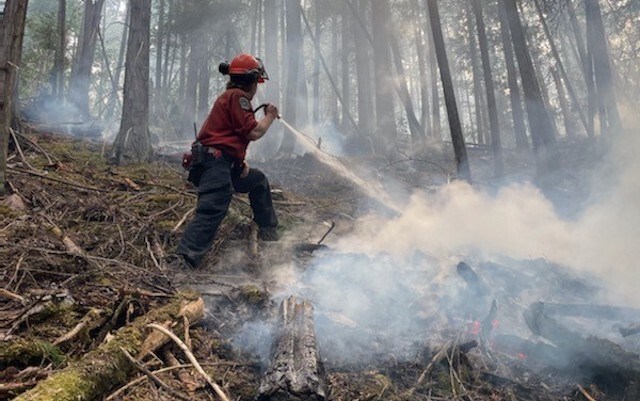 Large swaths of British Columbia could be in for a dangerous wildfire season this year after historic falloffs in spring precipitation left much of the southern half of the province “significantly drier than normal.”

That’s according to a BC Wildfire Service seasonal outlook released this week. In May, many areas of the southern Interior received less than half the average rainfall. In some areas, it was even worse.

Kelowna, Vernon and Kamloops received 20 per cent or less of their normal rainfall in May; Kelowna and Vernon were so dry last month, they set new record for spring precipitation as far back as 1904.

“If we don’t get a lot of precipitation in the next few weeks, we’re in trouble,” says fire ecologist Robert Gray.

“It's not looking good.”

So far this year, there have been 290 wildfires. Since April 1, they have burned roughly 2,198 hectares, scorching an area the size of downtown Vancouver six times over.

June is traditionally a rainy month in B.C., a time when precipitation gives plant and tree life one more jolt of water to help see them through a dry summer. By the end of this month, Gray says grasses start to dry out, what fire experts call ‘curing.’ However much rain they and the neighbouring trees receive in June sets the stage for the fire season.

By July, lightning strikes tend to ramp up, adding another trigger for wildfires.

Of the nearly 300 wildfires documented this year in B.C., nearly 94 per cent of those fires are thought to have been sparked by human activity, something Gray worries could be an even bigger problem this year as people look to escape COVID-19 restrictions and head outdoors.

In the end, Gray says there’s a limited amount of success you can have in preventing fire — the more people in nature, the more likely a stray cigarette but or hot vehicle engine will ignite a patch of dry grass.

“There only so much you can do,” he says. “It’s up to the public to not abandon their campfire.”