B.C. workplaces with COVID-19 outbreaks could be ordered to temporarily close

Workplaces, particularly in the Lower Mainland, are one of the most common areas where transmission is occurring, and it spans many sectors, according to Dr. Bonnie Henry.
Apr 9, 2021 10:45 AM By: Roxanne Egan-Elliott 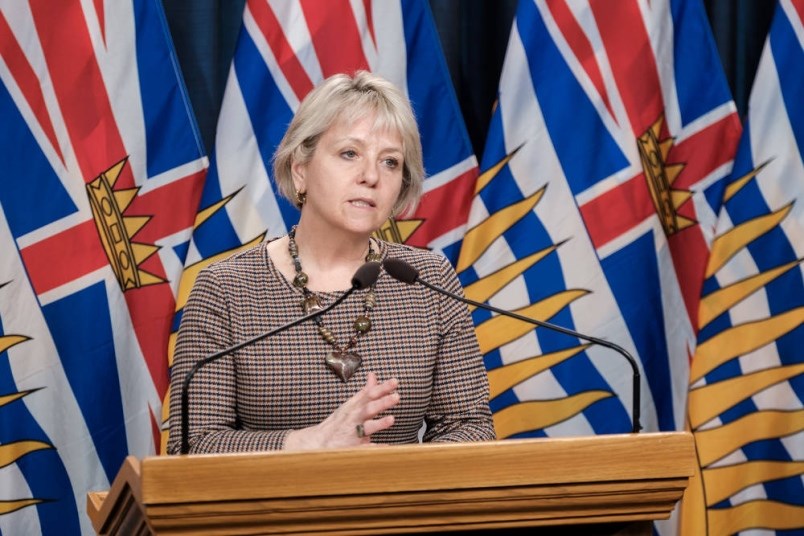 Dr. Bonnie Henry at one of her coronavirus press briefings.B.C. government

A new provincial order will allow WorkSafeBC to close workplaces for 10 days or more when there is confirmed transmission in the workplace and at least three people test positive for COVID-19, provincial health officer Dr. Bonnie Henry said Thursday.

Workplaces, particularly in the Lower Mainland, are one of the most common areas where transmission is occurring, and it spans many sectors, Henry said.

Transmission is occurring both in the workplace itself and during social interactions between workers who bring the virus into the workplace, she said.

In larger workplaces, a closure might be limited to one area or team where transmission has occurred, Henry said. The order will not affect essential services, such as schools, health care, first responders and transportation.

A list of closed businesses and their reopening dates will be posted publicly, Henry said.

The new order reflects a more targeted approach to control and prevent outbreaks in workplaces and will help to avoid sector closures, she said.

Henry announced Thursday two deaths and a record-breaking 1,293 cases, including 69 in Island Health. Fraser Health and Vancouver Coastal Health made up the bulk of new cases in the last 24 hours, with 645 and 448 cases respectively. There are 336 people hospitalized for COVID-19 in the province; 101 of those are in critical care.

During the week of March 28 to April 3, 145 cases were reported in Greater Victoria, 53 in the western communities (which stretches from the West Shore to Port Renfrew), 12 in the Saanich Peninsula, 74 in the Nanaimo area and 58 in a region that includes Parksville and Qualicum Beach.

About 4.2 per cent of all people who tested positive for COVID-19 in March ended up in hospital, while about four per cent of those with the virus but not a variant of concern were hospitalized. There was a slightly higher rate for the the B.1.1.7 variant, at 5.2 per cent.

“That’s a concern. It tells us that we need to continue to watch and see if the B.1.1.7 is associated with higher hospitalization rates,” she said.

About 4.3 per cent of people with the P.1 variant were hospitalized, but Henry cautioned the sample size was small and said the province will continue to monitor the effect of the variant.

The age breakdown of people who have contracted the B.1.1.7 variant reflects the same trend as those ­diagnosed with a case of ­COVID-19 that is not a variant of concern. In cases of the P.1 variant, 20- to 39-year-olds are overrepresented, which Henry said is partly because of where transmission was happening. A cluster was detected in Whistler before the ski resort was shut down.

“We’ll assume that anybody who is positive for COVID-19 needs to be treated as if they have one of these highly transmissible viruses,” Henry said.

The change will allow public health to focus on identifying and managing new outbreaks, determining the proportion of travellers who have variants of concern, and monitoring for reinfections, vaccine failures and variants that do not respond to vaccines, she said.

With highly transmissible variants spreading throughout the province, hospitals are seeing entire families in need of treatment, Henry said.

“It’s not just one or two people in a family or a household that are getting sick right now. … It’s everyone in a household or a community or accommodation that is becoming ill,” she said.

The province is inviting British Columbians to share how the pandemic has affected their lives in a survey through the B.C. Centre for Disease Control. More than 400,000 people completed a survey last spring that helped guide the province’s response to the pandemic over the fall and winter.

You can complete the province’s COVID-19 survey at bccdc.ca/health-info/diseases-conditions/covid-19/covid-19-survey.

Letter: My New West restaurant is in danger of closing with sudden indoor dining ban
Apr 3, 2021 9:06 AM