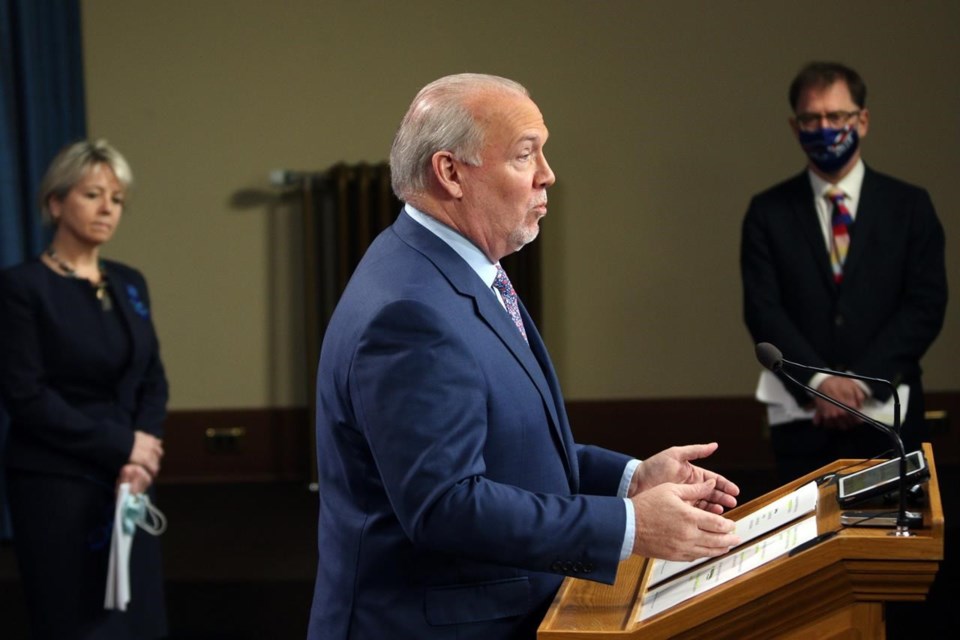 The Insurance Corporation of British Columbia will return $600 million in net savings to policy holders in March because there have been fewer accidents and claims during the COVID-19 pandemic, Horgan said during a news conference.

"During the early days of COVID, there were calls for a rebate or a refund to drivers as a result of reduced activity on our roadways, which led to fewer crashes, fewer claims, fewer injuries and fewer costs to ICBC," he said.

Horgan said the one-time rebate cheques are "the largest single give-back to policy holders in Canada through COVID-19."

The Opposition Liberals said in a statement the $190 rebate falls short of what drivers in other jurisdictions have received during the pandemic.

"Although this is welcome news for drivers, it should have happened months ago and it's confusing why it will take another six weeks to deliver," he said.

Solicitor General Mike Farnworth, who is the minister responsible for ICBC, said the rebate cheques will go to drivers who held policies last year from April 1 to Sept. 30. He said the rebates will range from $25 to $400.

"This comes as a result of balancing lower claims costs during the pandemic with other considerations, such as lower premium revenues," he said. "The vast majority of people who insured their vehicles in the early months of the pandemic will see on average a rebate of $190."

But the drop in claims costs were partly offset by lower revenues from premiums as drivers made changes to their insurance policies, held off on renewals or cancelled, said the ministry.

The ministry said the estimated impact of fewer claims was $720 million, but premium revenue was down $120 million, resulting in the net saving of $600 million.

The rebate amounts to about 19 per cent of the premiums drivers paid for coverage during the April 1 to Sept. 30 period, said the ministry.

Just a few years ago, the NDP government described the finances of the public auto insurer as a financial dumpster fire.

Shortly after the NDP government took office, Attorney General David Eby blamed losses at the corporation of more than a billion dollars on the former Liberal government. He accused the Liberals of siphoning off the profits to put in general revenue.

ICBC has been working over the past two years to bring costs down, leading to higher income, Horgan said.

"I know many of you who have been following these issues over the past number of years will be shocked to hear that rather than being in the red, ICBC is in a favourable financial position," he said.

Horgan said the rebate cheques are separate from ICBC savings that are due in May, when drivers will see a drop in rates of about 20 per cent or around $400 each.

Those rate cuts are part of the government's move to a so-called enhanced care model that limits lawsuits and increases treatment benefits for people injured in accidents, he said.

"We wanted to make absolutely sure that we were keeping ICBC on sound footing as we build a new enhanced model we've been working on for the past three years," Horgan said.

The New Democrats announced the move to an enhanced care model that places a $5,500 cap on accident payouts in February 2018 after the losses were revealed.

This report by The Canadian Press was first published Feb. 2, 2021.

Note to readers: This is a corrected story. A previous version said the rebate cheques will range from $50 to $400.