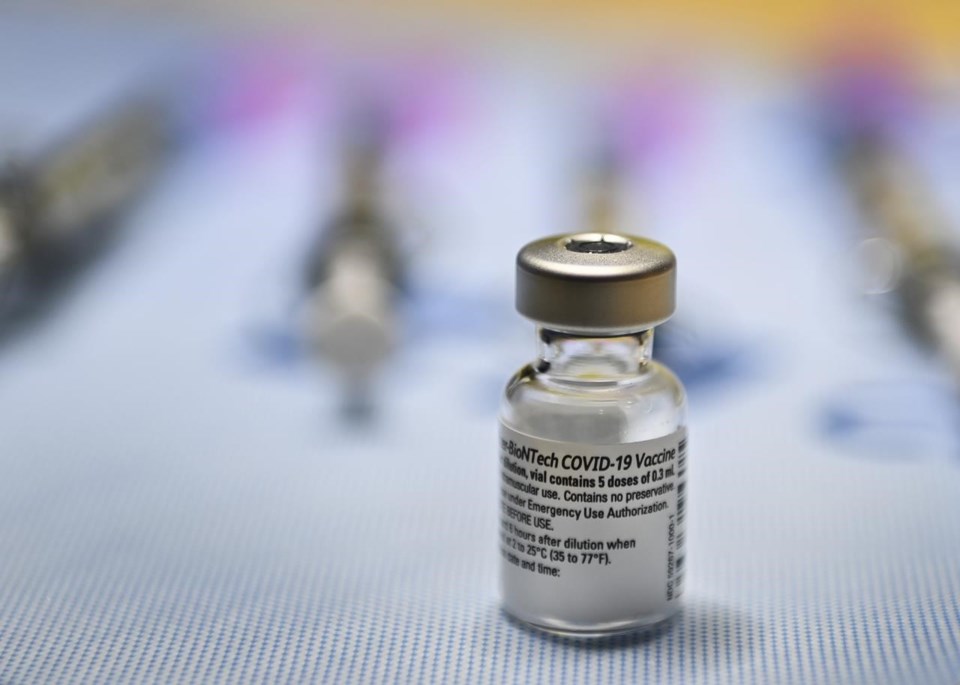 But she said B.C.'s immunization campaign is now rolling out on Vancouver Island, and in the Northern and Interior health regions.

"The Interior and the North are having quite large transmission events relative to the population," Henry told a news conference on Monday.

The curve of the outbreak is starting to level off amid ongoing public health rules, she said, but hundreds of new cases are being confirmed each day.

The vaccine must be stored at ultra-low temperatures and so far, Pfizer requires doses to be administered at points of arrival, said Henry, so people receiving it in coming days will have to travel to a central location.

Henry said she's looking forward to approval from the company to allow 975-dose trays of the vaccine to be broken up and delivered more widely.

"We're hoping it's going to come in the next few days and then the strategy will be to be able to take vaccine to long-term care homes."

Nine sites across B.C. received doses of the Pfizer-BioNTech vaccine this week, she said.

"It's still a very limited amount of vaccine," she said. "We're only getting about 30 trays between now and the first week of January, so it is a small amount to make sure that the delivery system works, that all of the things are in place for the clinics to get up and running."

"We are now in the place of planning for how we will get to every single community across British Columbia."

Henry said she's hopeful about another vaccine from U.S. biotech company Moderna, which comes with less stringent storage requirements. Data related to Moderna's vaccine is being reviewed by Health Canada.

Henry also addressed concerns about a new variant of the coronavirus in the United Kingdom, saying it has not been detected in Canada.

It appears the new strain can transmit more easily, she said, but the mutations do not seem to increase the severity of COVID-19 or interfere with the efficacy of vaccines or testing for the illness.

"We will be watching very carefully and monitoring this over the coming days and weeks," she said, adding there's still more to learn about the strain.