New Westminster seniors and youth were treated to a special performance by City Stage New West on Feb. 27.
Mar 14, 2012 1:00 AM By: New West Record 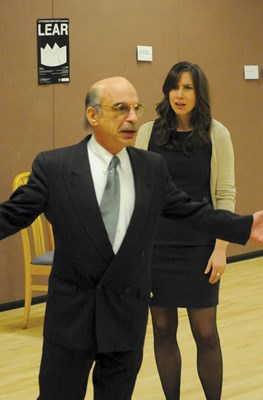 Leading the way: Richard Newman, as King Lear, works with emerging artist Lilli Clark as Goneril during a special event at Century House.Photo by Damon Calderwood

New Westminster seniors and youth were treated to a special performance by City Stage New West on Feb. 27.

The theatre company previewed scenes from its upcoming Lear events and gave 40 participants a chance to try their hand at some Shakespeare in a free event. The Enduring Age, Enduring Youth: King - and Queen - Lear event explored youth and senior themes in Shakespeare's King Lear and Eugene Stickland's contemporary Queen Lear.

City Stage New West is currently working on a Lear double-header, with concert readings of Queen Lear coming up on Sunday, March 18 and King Lear on Sunday, April 22.

Stickland's contemporary Canadian comedy tells the story of an aging actress cast in an allfemale version of King Lear, who struggles with memory and hires a teenager to help her learn her lines. Colleen Winton will direct Marilyn Norry as the aging Jane, along with Rachel Harrison as her young assistant Heather. Cellist Peggy Lee joins them on stage.

The next month, veteran actor Richard Newman will take to the stage as King Lear, with Russell Roberts as Gloucester, in King Lear, directed by RenÃ©e Bucciarelli.

Both shows are at 2 p.m. at Holy Trinity Cathedral, 514 Carnarvon St. Tickets are $15 general or $12 for seniors and students. Buy at www. brownpapertickets.ca.