'Lift the ban,' reads a sign posted in protest outside of Westwood Community Church in Coquitlam. 'The church & spiritual care workers are essential.'
May 6, 2021 2:54 PM By: Stefan Labbé 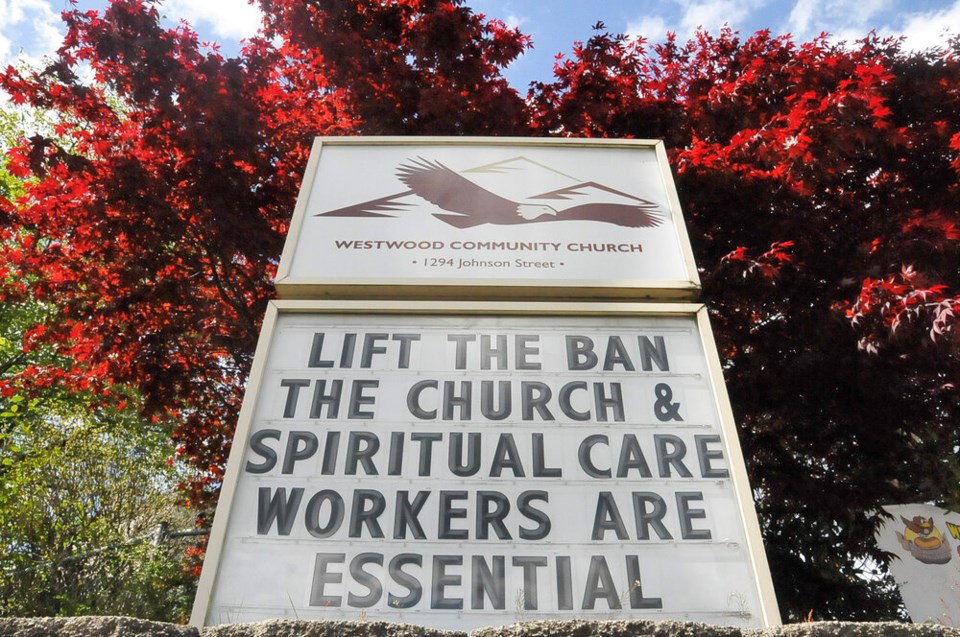 Coquitlam's Westwood Community Church is protesting what it says is the unfair application of an indoor gathering ban.STEFAN LABBÉ/THE TRI-CITY NEWS

A Coquitlam church is calling on the B.C. government to lift its current ban on indoor religious services, arguing that it can guard against the transmission of COVID-19 in the same way as a school or grocery store does.

“Lift the ban,” reads a sign outside of Westwood Community Church off Johnson Street north of Coquitlam Centre. “The church & spiritual care workers are essential.”

Associate pastor Adam Gabeli is one of three pastors who lead a congregation of about 350 worshipers. Since late March, they have held their religious gatherings in drive-thru Sunday worship sessions where up to 50 cars parade into their parking lot.

A public health order has banned all indoor religious services since March 29, whether in a “church, synagogue, mosque, gudwara, temple or other place of worship,” states the B.C. government website.

Exceptions include individual visits to a place of worship to get guidance from a spiritual leader or take part in personal prayer, according to a B.C. government website outlining active restrictions. Religious leaders can also attend people’s homes to provide certain religious services.

For group prayer, however, all activities must be held outside under a number of restrictions.

This is not the first time a B.C. church has challenged bans on religious gatherings to stem the spread of COVID-19. The ban on indoor worshipping has prompted a number of religious organizations to breach public health orders and challenge violation tickets in court, arguing such public health rules trample on people’s rights and freedoms.

But in one case that reached the B.C. Supreme Court in March, the judge ruled the ban did not discriminate against religious groups, and that given the range of options open to Provincial Health Officer Dr. Bonnie Henry, the restrictions were reasonable.

South of the border, the country’s highest court has come to a different conclusion. California lifted a ban on indoor worshipping in April following a string of U.S. Supreme Court rulings in favour of religious gatherings — the ruling left in place capacity restrictions and bans on chanting and singing, both of which significantly up the risk of transmitting the virus.

Gabeli says the church is following public health guidelines and is committed to keeping his congregation, and the wider community, safe. But he also worries that the restrictions on houses of worship have been drawn out too long and have been applied in a heavy-handed and uneven approach.

“That’s what the sign is — it’s a protest. We’re standing in solidarity with different church groups that are still choosing to still meet inside, and choosing to do their best to meet the religious and worship needs of their communities and their congregations,” said Gabeli.

Gabeli added that he is hearing that “a very large majority of British Columbian worshipers want to get back to things and do so safely.” His Sunday drive-thru sessions already bring in members from a number of churches across the region who “need that spiritual food” but don’t have the space or resources to host drive-thrus on their own.

“We’d rather be inside,” he said. “If children can meet reasonably in schools, if people can meet shopping — you know, hundreds of people — we should be able to do it too,” he said.

“I can meet for an AA meeting in a church basement with 20 of us. How come they can’t come and worship on a Sunday morning?”

—With files from the Canadian Press