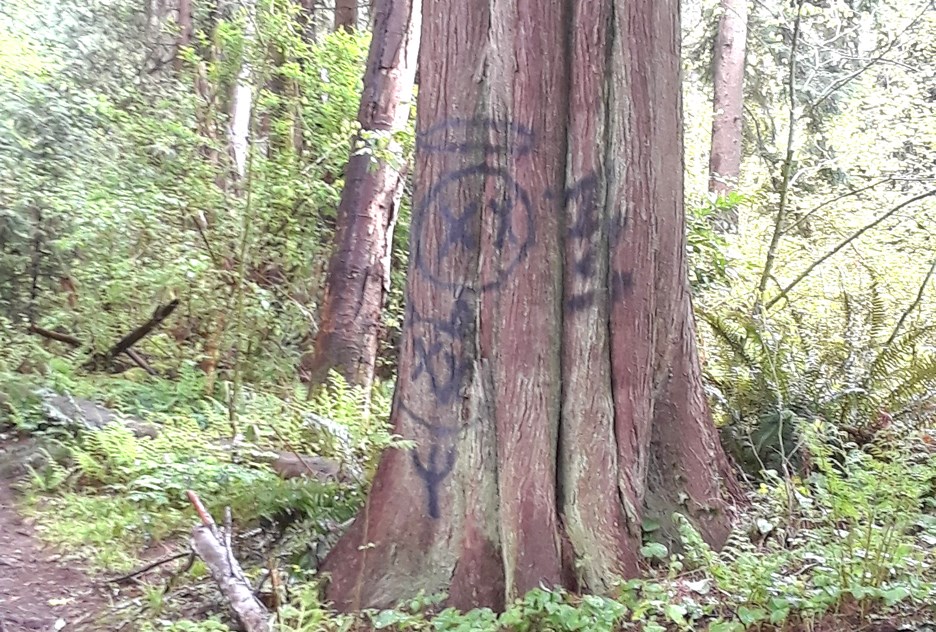 A regular user of a Burnaby park is fed up with the damage being done to his happy place.

Walker Andrew email the NOW a photo of a majestic tree in Robert Burnaby Park that had been spray painted by a vandal.

“We live close to Robert Burnaby Park and enjoy walking the trails regularly,” said Andrew. “A few days ago, we came upon an area where a number of the trees had been tagged with spray paint. What a shame.”

Andrew added that Robert Burnaby Park had been overrun in recent months after an artist erected multiple sculptures made out of twigs and branches.

“It's only been a few months since another section of the park was ruined by droves of people looking for the now famous ‘stick sculptures,’” he said. “In the first few months after word of the sculptures got out, the trails were teeming with people; especially on nice days. Sometimes there were lineups of around 20-40 people waiting at the sculptures. Most people seemed to be wearing masks and were trying to physically distance.

“In recent months, the number of people on the trails has decreased quite a bit. However, the damage from those earlier crowds is clearly noticeable. Single-track trails have been pounded out by two or three times their original width. The areas around the different sculptures have also been flattened. Where there used to be shrubs and ferns there is now just dirt. And, of course, there was evidence of people touching the sculptures too.”