JERUSALEM — Like so many mothers, Raul Artal’s insisted that her son was going to be a doctor. But there was a history — and heroism — behind her ambitions for him.
Apr 8, 2021 11:25 AM By: Canadian Press 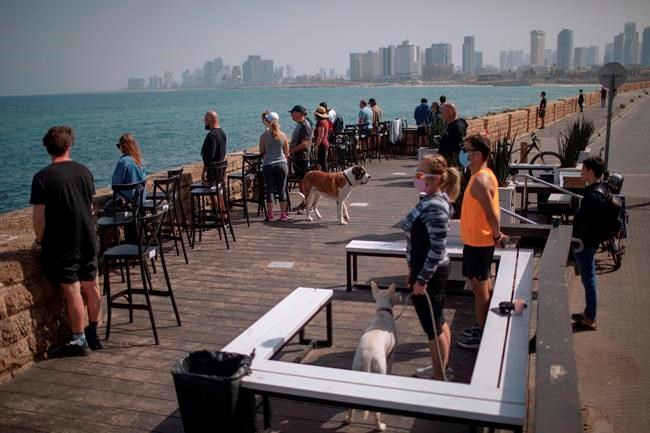 JERUSALEM — Like so many mothers, Raul Artal’s insisted that her son was going to be a doctor.

But there was a history — and heroism — behind her ambitions for him. A determined Jewish doctor in a concentration camp in 1943 delivered Artal in a barn, despite his feet-first position — and saved the lives of both mother and son.

His mother was right: Now, Artal, 78, is a retired obstetrician himself.

“I've heard that story so many times, I could become nothing else” but a doctor, he chuckled during a recent interview from his Los Angeles-area home.

By birth and by choice, he personifies the theme of this year’s International March of the Living — an educational program that coincides with Israel’s annual Holocaust memorial day.

Thousands of people usually take part in the march on the grounds of the former Auschwitz death camp, which had been run by Germany, in Poland. But for a second year in a row, Wednesday’s event took place virtually due to the coronavirus pandemic.

Doctors like the one who delivered Artal in the most harrowing circumstances “served as rays of light during the Holocaust,” the event’s organizers said. In 2021, “we salute the relentless commitment of the selfless professionals facing today’s world health crisis.”

“I believe that the healing arts lie on the path of goodness, the same path all of you have chosen in remembering and listening to the voices of those who perished in the Holocaust,” Fauci said.

The enduring lesson of the ages, Fauci said, is not just “that goodness and evil coexist, but that we are free to choose one over the other.”

The scale and circumstances differ between the pandemic’s toll and the Nazi-engineered genocide of 6 million Jews during World War II. But organizers of the annual march said they wanted to the frontline workers who treat and counsel people who are suffering, at great risk and cost to themselves.

“We look at the pandemic, it happens once in 100 years. Doctors all over the world are fighting to save people,” said Shmuel Rosenman, chairman of the march. “It think it’s our job as educators to come to the world and say, ‘Listen people. The world cannot afford to forget what happened, (or) not embrace what’s happening now.’”

Holocaust memorial day is is one of the most days in the Israeli calendar, marking the anniversary of the 1943 Warsaw Ghetto uprising — the most significant act of Jewish resistance against Nazi Germany during the Holocaust. Israel gained independence in 1948 in part as a refuge for Jews.

In Washington, U.S. Secretary of State Antony Blinken, whose stepfather was a Holocaust survivor, the victims and criticized State Department officials who prevented European Jews from immigrating to the U.S. during World War II.

He singled out one by name, Breckenridge Long, a wartime assistant secretary of state who Blinken said lied to Congress, blocked reports of mass killings and put up bureaucratic obstacles to keep Jews out of the U.S.

“We must never forget the way individuals can make entire systems, from top to bottom, tilt toward the inhumane. How the sanitized language of cables, briefings, and regulations can be used to turn away people we should help,” he said. “And we must not forget that individuals, armed with the truth and their convictions, can use those same mechanisms to save lives.”

In an annual custom, Israeli television and radio shifted over to Holocaust remembrance programs, and restaurants and other entertainment shut down.

On Thursday, air raid sirens wailed across Israel. Pedestrians halted on sidewalks. Drivers on the freeways parked in place and stood beside their vehicles for the two minutes of silence.

People spoke of how the isolation of the past year’s lockdowns weighed especially heavily on Holocaust survivors, fewer than 180,000 of whom remain in Israel. Some 900 of them died from COVID-19 in 2020, roughly one in seven of the country’s overall death toll.

“This war we are fighting now is very different,” Nachman Ash, Israel’s coronavirus czar, said in an interview.

Even in Israel, Ash said an anti-vaccination protester outside his home carried a sign referring to the post-war Nuremburg trials of Nazi war criminals.

Ash's father was the only survivor of a family that perished at Auschwitz. “We may think, ‘What’s happened to our lives?’ But the perspective is different when you think of the life of my father and how it changed when he was 14.”

Holocaust education has taken on new urgency given a rise of online anti-Semitism during the pandemic. Research also suggests a lack of knowledge about the genocide among young people, while the number of aging survivors dwindles.

Artal has spent his retirement drawing a line between his difficult birth and his medical expertise in high-risk pregnancies as a way of educating young people about the Holocaust. After the camp was liberated, his parents moved to Romania, then the United States.

They changed plans again in the early 1960s, when they saw a sign on a restaurant door in New York City that said, “No dogs, no Negros, no Jews.”

“They said, ‘We are out of here.’ And we moved to Israel,” said Artal. He met his wife, they both went to medical school in Italy, and Artal rose to become chairman of the Department of Obstetrics, Gynecology and Women’s Health at Saint Louis University. Along the way, he became an early authority on the benefits of exercise during pregnancy.

Later in life, he said, “I understood my inspiration to go into medicine, and ob-gyn in particular. I wanted to help minimize the suffering of other women.”