The poll found that 37 per cent of Canadians believe COVID-19 was created in a lab and that 15 per cent think big pharma helped spread it
May 1, 2021 12:56 PM By: Cameron Thomson 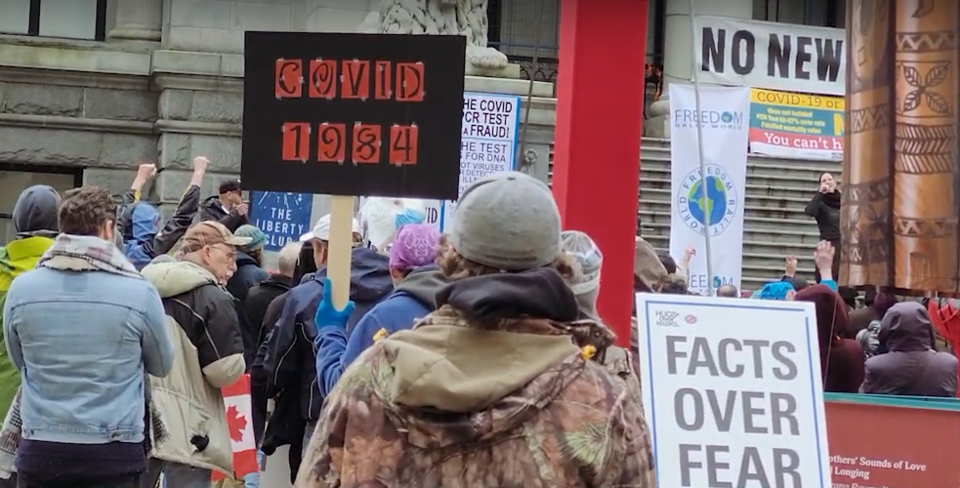 The anti-mask protest at the Vancouver Art Gallery on Saturday, Feb. 20, 2021.Alan Yu

Conspiracy theories surrounding the coronavirus (COVID-19) pandemic are many, widely circulated and believed by more than just a fringe group of people.

That’s the conclusion recently arrived at by Insights West, a marketing research firm based in Western Canada. Insights West recently released a new poll based on an online study among a sample of 1,603 Canadian residents. The study found various COVID-19 conspiracy theories are believed by a sizable minority of Canadians across the country, at levels that rival many conspiracy theories that have been circulating for decades.

Another 15 per cent believe pharmaceutical companies have helped spread the virus. Just nine per cent of Canadians believe the vaccine includes a chip to track people but only six per cent think there is a connection between 5G internet and the virus.

Males much more likely than females to believe conspiracy theories

The poll also found political alignment and gender were factors in how many people believe COVID-19 was created in a lab or as a biological weapon.

“Males are much more likely than females to believe these two theories (both 12 percentage points higher than for females); BC and English Quebec residents are less likely relative to residents in other provinces to believe either,” the poll found. 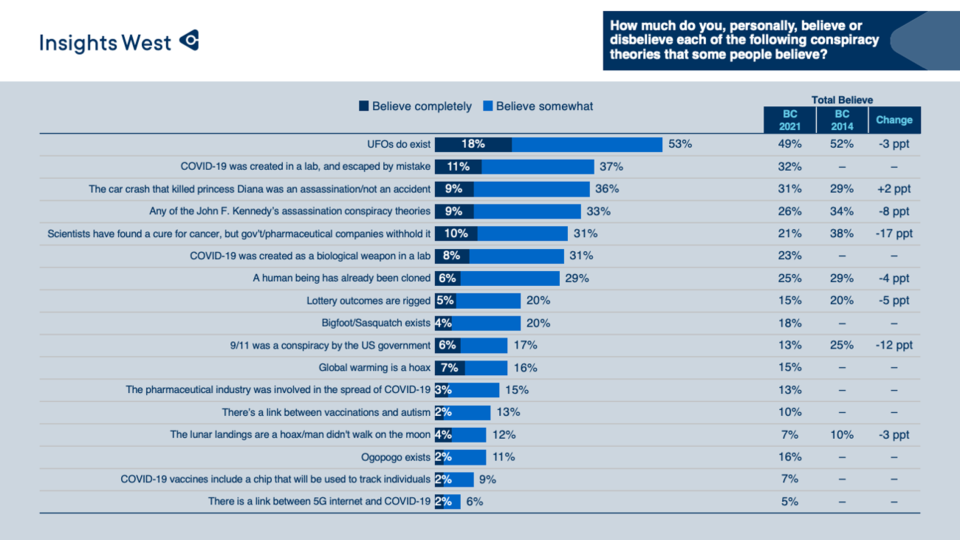 37 per cent of Canadians believe COVID-19 was created in a lab and escaped by mistake. By Insights West

“The proliferation of these theories has been exacerbated by the shareability of these views on social media, which has elevated conspiracy theories to perhaps as high as it’s ever been in today’s world,” said Steve Mossop, president of Insights West. “I believe that the vaccine hesitancy that we are seeing in this country can be widely attributed to these swirling conspiracy theories.”

In December last year, in response to anti-mask protests in Vancouver, we reached out to experts to learn more about how people come to believe these theories and how to speak with them.

David Black, a communications theorist at Victoria's Royal Roads University, says there are a few tricks to questioning these ideologies without sparking outrage.

The first is to do the exact opposite of what could be our knee-jerk reaction - to argue the facts of their position. Black says that by doing this you are playing directly into their hand as they now have all they need to deflect something that is empirically true.

"Once you do that you are arguing within their frame of reference and conspiracy theories are designed to refute contrary evidence," Black said.

Instead, Black suggests examining the way of thinking that got the person to their conclusion. This is not something that can be done via a Facebook comment or a Twitter thread Black warns, saying a high level of trust is needed to be formed in order to have that conversation.

"Once you have established that relationship of trust then you say 'let's talk about what this kind of thinking that you're indulging is about,” he said. "You kind of examine the designed features, you examine the systemology of conspiracy theory itself."